Another year of ‘Celebration’ at NKU 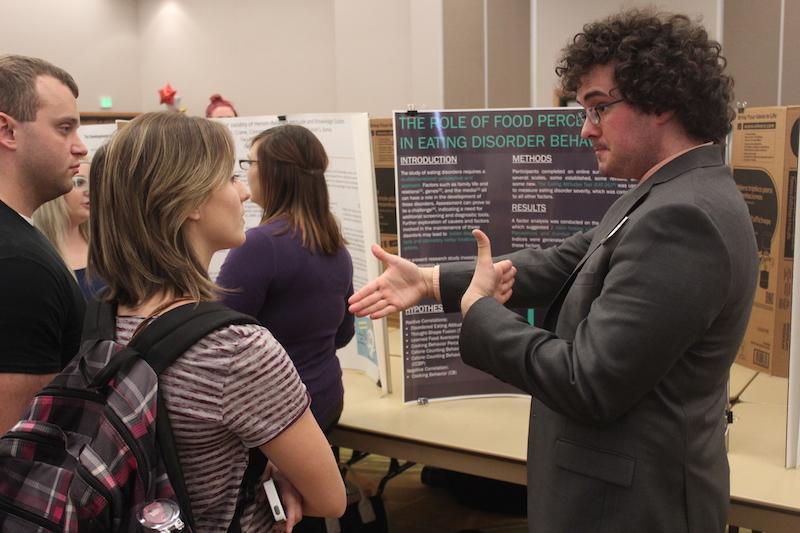 A student discusses their poster and research with others at the Celebration Poster event.

Departments of all disciplines from across the university came together to celebrate students’ research and creativity over the last year.

Between April 11 and April 15, students across the campus used their talents to display their achievements in the annual Celebration of Research and Creativity Festival.

“The thing that I really like about this year, there’s a broader mix of the kinds of work that are being presented that I think represents all of our disciplines at the university,” Zach Hart, chair of the College of Informatics, and co-chair of the Celebration Festival, said.

Dr. Christine Curran, also co-chairing the event, said as the university continues to grow, each department is able to gain more and more students with the talent and creativity to participate in research. NKU is able to provide students the ability to go above and beyond the classroom lecture and into a more hands-on setting.

Curran said that the kind of skills students learn in this environment is what will take them to another level and that the knowledge students obtain can be a great addition to their resume  as well as help them find jobs easier.

This year will feature about ten more presentations than last year’s celebration festival, according to Hart.

“Participation is up this year,” Hart said. “I think we have about 294 and we had 284 last year and that includes poster presentations, interaction, which usually has some kind of technology component to it, and artistic presentations, which we have a film festival on Friday with electronic media and broadcasting.”

“The poster presentation is always kind of the central piece that everyone kind of focuses on, but the fact that there are events going on all week I think is really the key there,” Hart said.

“It’s definitely a true celebration for that [each] department,” Curran said. “Everyone gets to see what the other students have been doing.”

One junior anthropology major found her niche within the engineering department inside the Business Center.

Karen Ely spends her extra time in a machine shop where she learns to build a very unique kind of car.

Ely is a member of Norse Baja, a student club with a very physically-driven goal, to create buggies to race in, in yearly competitions.

Along with three other members, Ely must scrounge together parts to assemble a racing buggy. Between August and May, students are preparing the car to race before summer begins.

On the other side of campus, a group of students were traveling outside of the country to do their research.

Junior Molly Brubaker, and seniors Harley Thornton and Emmy Cady worked on creating water filtration systems for the communities in the Dominican Republic.

The three girls received the opportunity to travel abroad through an organization called Wine to Water. They were chosen by their professor Dr. Charlisa Daniels to have the opportunity to go and make these systems to help bring better drinking water to the community.

Cady, a chemistry major, stayed behind at NKU due to illness, but still found ways to participate.

“I did water quality testing on water here [Loch Norse], so we could compare it,” she said.

Thornton, a nursing major, focused on the results the filtration system brought to the community.

“If you look into the bucket,  there will be a bunch of dirt at the bottom,” she said.

Dirt was a sign that the system worked and was filtering out the bad water.

In another corner of campus, Celebration Week will display senior art exhibits and possibly more than ever before.

“We know the fine arts program has grown so much,” Curran said. “They used to have just one senior exhibition but they’re basically going to be exhibiting in two waves.”

As Hart stated, the mix of projects are very diverse this year.

“Sometimes it’s individual independent study project students have done, sometimes it’s an entire class has done a research project and their teams and they do a poster,” Hart said.

Celebration Week offered a very insightful look into the accomplishments of other departments and the opportunities open to students.

Curran says that the event continues to grow every year. The difference with this year according to Hart is the increased amount of interactive presentations which could affect how students present in years to come.