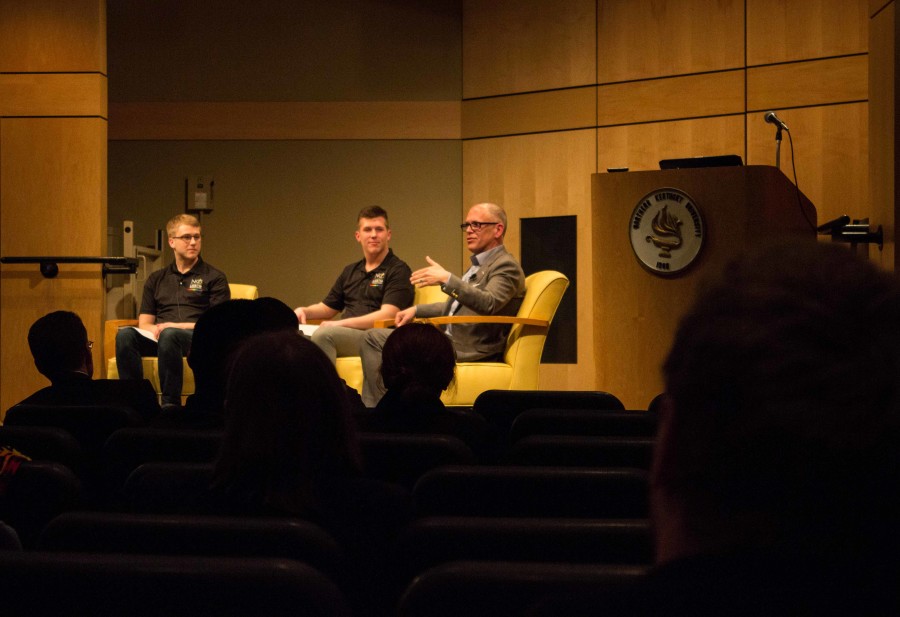 Jim Obergefell speaks during NKU Pride Week. Obergefell notes that the fight is not over.

The lead plaintiff from the landmark Supreme Court case that guaranteed same-sex couples the right to marriage visited NKU on Tuesday to discuss how he got involved in what he calls “accidental activism” and what’s next for the LGBTQ community.

Jim Obergefell unwittingly became involved in gay rights activism when he and his husband John Arthur filed suit in Ohio, claiming that Ohio discriminates against same-sex couples who marry outside the state; after many appeals and ultimately a Supreme Court decision in his favor, Obergefell’s marriage was finally recognized in Ohio, and so too would other same-sex marriages in all states.

Since then, he has continued to engage in activism and pursue civil rights for the LGBTQ community.

“I’m not going to shut up,” Obergefell said.  “I’m not going to sit back and get out of my role as an activist. I can’t do it. I’ve discovered that fighting for something that’s bigger than I am is really important to me. And I will continue to do that.”

After arriving upon his newfound celebrity, Obergefell became very active in the LGBTQ community. Besides traveling the country to speak about his experiences, he has also partaken in some charitable work as well as working with international activists.

“I’ve gotten involved with trying to help fight LGBTQ youth homelessness as part of a challenge grant for Lighthouse [Youth] Services in Cincinnati,” he said. “I’ve been a little bit more involved internationally, I met with several global activists last week, I’ve been on Capitol Hill lobbying for the Equality Act; so I’m really trying to be as involved as I possibly can.

“As I continue to do this I will probably start focusing a little bit more on certain areas, but I’m still kind of finding my way,” Obergefell said. “All I know is that I’m in it for the long run. Over the past two years, I’ve had so many big experiences. People come up to me, tell me stories and thank me, and — I mean, I can’t step away from that. I see what marriage equality means for so many people and it’s become a part of who I am.”

Obergefell explained to the audience that anyone can support the LGBTQ community in bringing about change by simply being vocal and educating others.

“I really think it comes down to the one-on-one, the personal. Harvey Milk always said ‘Come out.’ When you come out, you break up the barriers. You let people understand that we’re no different than anyone else. I think that’s what we have to continue to do: we have to talk about it.

“We have to tell people, we have to say ‘Yeah, we can get married, but here are all these other areas where we’re not equal [and where] we’re not treated the same as every other American.’ I think the root of it is: educate people, talk to them about it and do not be afraid to bring it up and say, ‘No, we’re not equal, the fight isn’t over.’”

He later mentioned that “being involved in helping, talking and showing the world that you care, that’s worth more than any money.”

Obergefell also touched on what important legal matters he thinks the LGBTQ community should be considering in the near future. He described the Equality Act of 2015 and what significance it has.

“The Equality Act — in a nutshell — what it would do is [amend] the 1964 Civil Rights Act and add sexual orientation and gender identity as protected classes,” Obergefell said. “What that would mean is that… it would make it illegal to deny a service simply based on [a person’s] sexual orientation or gender identity. That one Act — updating that would have a huge impact on our rights and our ability to really function as full, equal Americans. So for me, that’s what I would consider the biggest thing we can do legally to make sure that we are treated the same as every other American.”

Obergefell’s story, and the Supreme Court decision for which he was a plaintiff, have a lot of meaning for the students and faculty of NKU’s LGBTQ Programs and Services.

The director of the program, Bonnie Meyer, distinctly recalls what she was doing the day the decision was handed down.

“I was sitting [in my office], looking at my computer, just waiting for the ruling to come down,” Meyer recalled. “My wife and I were both watching very anxiously to see which way the decision would go.”

Nick Snider and Reid Kline, both students at NKU, led the discussion of the event. Afterward they mentioned how the outcome of Obergefell’s actions inspired them.

“[Obergefell’s achievements] serve as a push to stand up and not be afraid to speak out, and just be that face for people that can’t necessarily speak up anymore,” Snider said.

“His case is like a huge beacon of hope,” Kline said. “Being in that energy, feeling that victory [after the decision was announced] — even with all of the hardships that [are in] the community and [knowing] where we have to go forward, his case is a victory and you can’t take that away.”

Obergefell is currently involved in writing a book about his story that is expected to release in June and there are also plans to create a movie about his life.