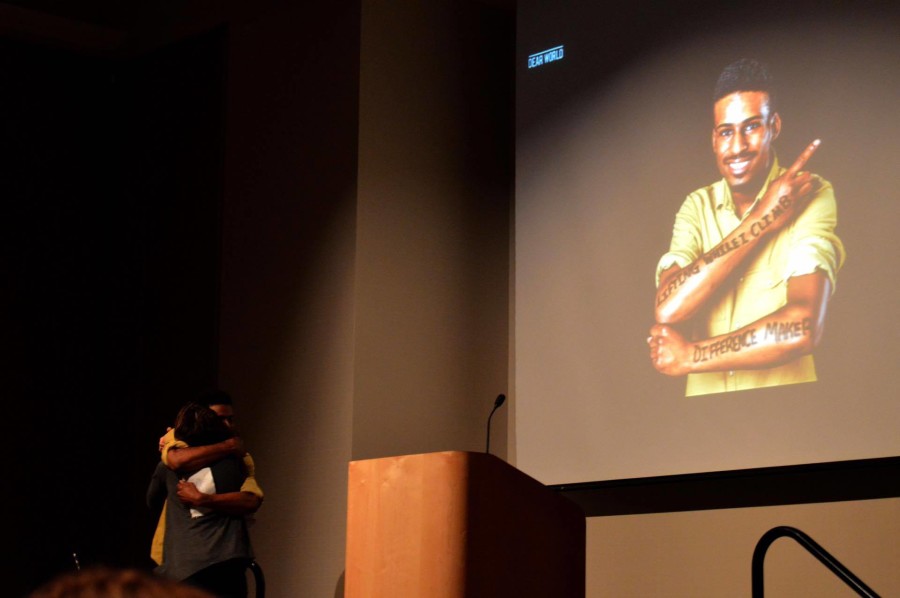 Kristian Johnson embraces Katie Greenman. Greenman was the lead speaker at the event and hugged each speaker afterwards.

When Katie Greenman, lead speaker at the event and team member of the “Dear World” project asked the audience who would want to be a part of Morgan Bell’s family, every hand in the room went up.

“I feel as though I have been searching for a family, and I don’t think I have truly found that because I don’t know what that feels like or what that looks like,” Bell, senior and integrative studies major, said as she shared her story Thursday night.

On Thursday, March 31, Dear World and APB hosted a storytelling event in NKU’s Student Union Ballroom. The event highlighted what the Dear World project does and allowed six NKU students to share a small piece of their own story.

According to Greenman, the project started in New Orleans just after Hurricane Katrina passed, when everyone was questioning what would become of the city.

“We took to the streets with our cameras and invited people to write on their skin a love letter to the city,” Greenman said. “Something to bring that life and love and fire back to the city, so we remember why it’s worth coming back.”

Greenman said the project changed when a man came to have his portrait done and asked if he could try something a little different. The man left and returned with his wife, who is seen in the portrait opening his shirt. The words ‘Cancer Free’ are written on his chest.

“He had found out that afternoon that he was now a survivor of cancer, and we were there for that moment where he got to capture it and celebrate it,” Greenman said. “And that’s when we realized that this project is so much bigger than one city. It’s about capturing the experiences and the moments and what makes us who we are.”

With more than 350 portraits taken at NKU and countless more across the globe, Dear World has taken portraits of people in just about every situation imaginable. Despite this diversity, Dear World highlights commonality as a major theme of their project.

“What we’re finding over and over again is that we have way more in common with every human being than we have different,” Greenman said.

The NKU community also found they could relate to each other when six students shared their stories, all of which had a common theme of overcoming hardships and becoming a better person because of that.

Troy Cornes, sophomore and secondary English education major, shared what the message in his portrait, “Glass always half full,” meant to him.

“I’ve been surrounded by reasons why I couldn’t do things…but I didn’t listen to any of those, I didn’t listen to the reasons that I could fail,” Cornes said. “We will have moments where things may not be the best but as long as you stick to thinking that everything is going to be alright and everything is going to work out, then they will, and that’s my story.”Clare Lees, junior and social work major at NKU, attended the event as an audience member and talked about how she perceived it.

Lees also took a portrait prior to the event with the message, “I am both a masterpiece and a work in progress” written on her body. Lees said that this message was a reflection of her self-image and the idea that while people continue to grow and progress throughout their lives, we should still love them as the beautiful people they are.

“What we see right now is not all there is to a person,” Lees said. “They have a past and they have things that define them, and it’s important for us to look at those so we can understand them and love them to the best of our ability.”