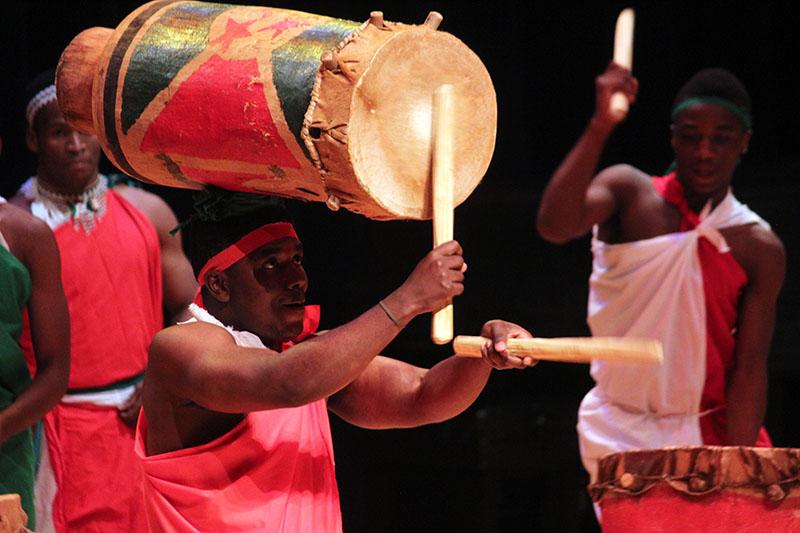 Burundian drummer performs while balancing a drum on his head

Bringing in the sights and smells and culture of the many countries of Africa, the African Student Union hosted the third annual Culture Show, Arrival to the Motherland Friday, March 25.

The show included various foods, fashion and music from countries like Senegal, Nigeria, Kenya and many others.

Before the show a line of African dishes were served at the Baptist Student Center. People lined up out the door to get a taste of Africa on their plates.

“I was scared at first because I am scared of trying new things,” said Sierra Hawkins, a freshman at NKU. “But overall, I really enjoyed all of it.”

Various dishes ranging from Jamaican jerk chicken and curry goat, to West African dishes like the Nigerian dishes Egusi and Puff Puff were lined up ready to be served.

Jasmine Harper, a sophomore at NKU, is not new to the food but came for the familiar taste.

“I knew I would like everything,” Harper said. “Every country has a different taste.”

The show was hosted by Nelson Ochu, a freshman at NKU and also a member of ASU.

Opening the show for the first time, The Burundian Drummers of Louisville got the crowd ready for the rest of the show with enthusiastic dancing and drumming.

The drummers flowed on to stage with traditional clothing and drums of the country.

“Everytime I perform it connects me back to my ancestors,” said Irakoze Dieudone, one of the drummers in the Burundian Drummers of Louisville, a sophomore at NKU and also a PR member of ASU.

“I haven’t had many chances to perform, so having the chance to be behind the drum, dance, and sing in front of my NKU family was like the opportunity of a lifetime,” Dieudone said.

Following the drummers, a series of African male and female fashion pieces were showcased across stage.

Members of the NAACP collaborated with ASU and performed several cultural and popular dances of different areas.

A sea of various colors and fashion styles were strutted across stage by male and female models.

The show ended with another drum session with the Burundian Drummers of Louisville.