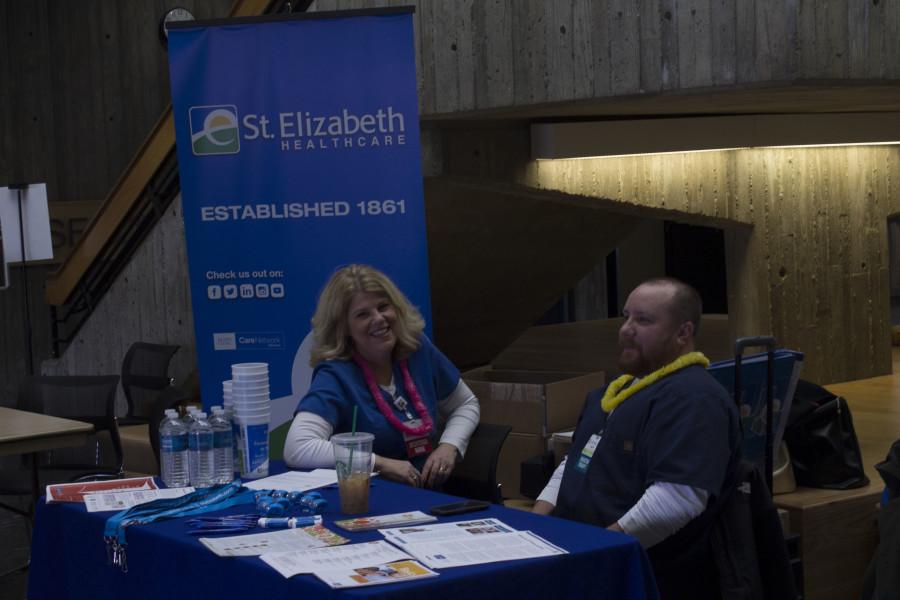 Shannon Miller and Jason Gusto came from St. Elizabeth. They were there to also help students stay safe.

NKU’s Heath, Counseling and Student Wellness Center hosted its second annual Play It Safe Spring Break event on Wednesday in the University Center lobby, encouraging students to engage in safe and healthy habits over the upcoming week off.

“We want to promote safety and harm reduction,” said Siobhan Ryan-Perry, an Alcohol and Drug clinician on campus. “We understand that college students are going to drink, but we want them to just make smart choices and be safe about it with regards to their sexual health, their skin, drugs and alcohol and just travel in general.”

Several campus groups set up tables, including Norse Violence Prevention, which had information about preventing and reporting sexual assault, and Athletic Training, which educated visitors about the danger of heat stroke and the importance of proper hydration. St. Elizabeth Healthcare provided information on free skin cancer screening clinics and the HPV vaccine, which can help prevent cervical, vaginal and vulvar cancer.

One particularly popular spot was a booth in which visitors could see their reflection under ultraviolet light.

“It was kind of scary looking,” said Barbara Carrasquel, a junior Spanish education major who attended the event. “You can see the sun damage. It’s pretty amazing. I’ve seen that on the news and usually you have to pay a lot of money and see a dermatologist to use that.”

Carrasquel appreciated the effort that organizers made to inform students of the potential harms of spring break.

“Most kids will go somewhere to party, drink, and do crazy stuff,” Carrasquel said. “I think it’s good that they’re trying to get ahead of the game and give them information so they’ll be aware of danger.”

According to the National Institute on Alcohol Abuse and Alcoholism, approximately 1,825 college students between the ages of 18 and 24 die each year from unintended, alcohol-related injuries. In addition, an estimated 400,000 students have unprotected sex annually, and 97,000 students are victims of alcohol-related sexual assault.

Betsy Hausfeld, a registered nurse at NKU, hoped that the information provided would resonate with students beyond spring break.

“We’re trying to promote healthy habits for spring break, but really any time of the year,” Hausfeld said.