Just roll with it : NKU improv group takes the stage 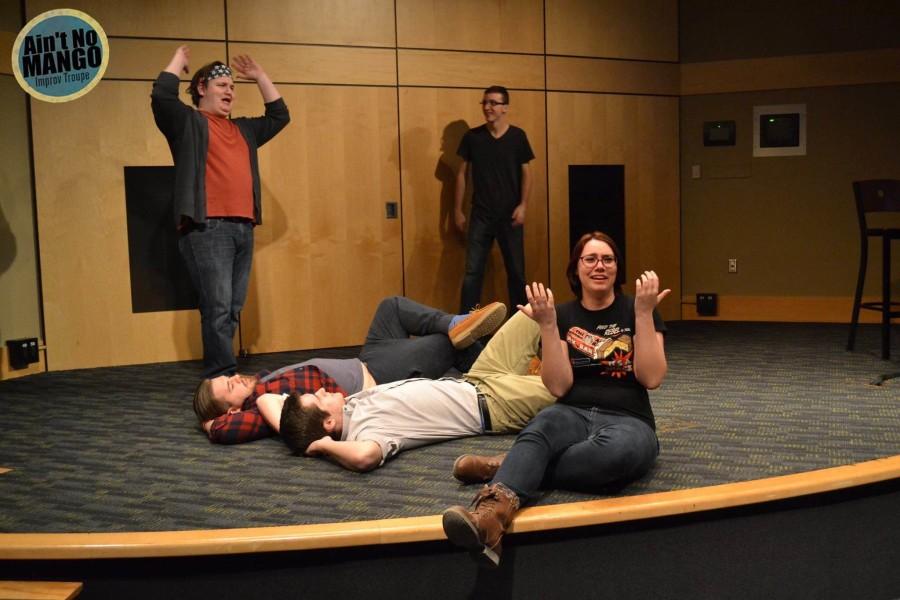 Provided by Ain't No Mango

Jules Rhodes shows distress in the scene. These scenes took place in the Otto Budig Theater.

Imagine carrying on a show based on a prompt. Then two audience members are pulled in stage to help you continue whatever story you were already rolling with. That’s how improv works.

Sometimes improv groups play games that engage the audience. In this case, the game was called Two Pillars- where two audience members act as pillars and when prompted by the actor must give a word. Any word.

In this case, the actor had to use poached eggs to carry on the scene.

Ain’t No Mango is the name of the troupe that performed Thursday, Feb. 25  at Leapin’ Lizards Lounge. This group began at NKU because of three students.

“We auditioned for This Side Up (an improv group),” Junior BFA acting major Zach Robinson said. “We didn’t get in.”

That’s when he, Andrew Ornelas and Calvin Horner formed the group Ain’t No Mango in fall 2013.

“Ain’t No Mango is a reference to one of our favorite bits that ever arose in a scene,” Robinson said.

In one of their improv exercises early on is where the name came about. Theater professor Charlie Roetting coached them about longform improv.

They were playing a game within the skit called “Back to Back to Back” where they sat in chairs back to back. Roetting called out certain prompts for them.

Communication studies junior Jules Rhodes said that she found out about them at Fresh Fusion.

Improv can been viewed as a stress reliever and way to get out of one’s comfort zone.

“It’s a great way to blow off steam,” Rhodes said.

Rhodes said that she began doing improv in high school as a way to get out of her shell. She said she struggled with talking to people, and now she’s a communications major because improv helped her so much.

Rhodes noted that she is currently the only woman in the group, and she is supportive  of “more diversity” within the improv group.

Ray Dzhorgov, junior theater major, said that they are like a close family, but they aren’t exclusive. Dzhorgov has known Robinson since high school when they were improv partners.

“We’re a small group of guys and gals,” Dzhorgov said.

On Fridays, they have an All Play from 5-6 p.m. in the theater building room FA 215. All Plays are open for everyone to participate.

“It gives people an outlet,” Dzhorgov said. “And it has given me confidence.”

Dzhorgov said that the most important part about improv is to just have fun.

The group has shows throughout the year at NKU, and sometimes they perform at venues and cafes like  Leapin’ Lizards Lounge. Robinson said that their biggest shows are in the summer.

“We’re at the strongest we’ve ever been,” Robinson said.