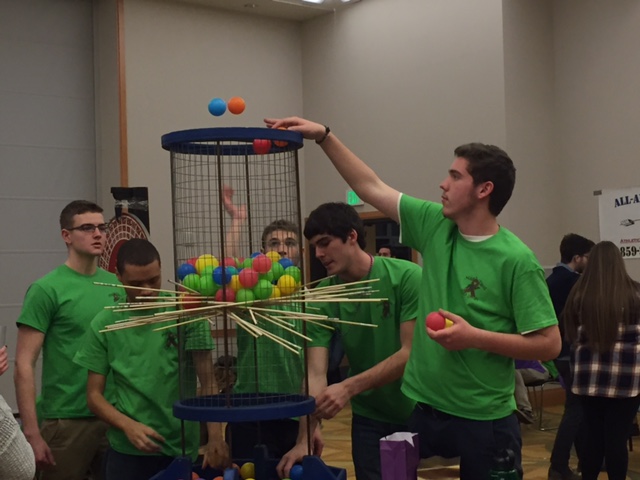 Laughter and chatter filled the Student Union Ballroom Saturday night as a line formed of parents, grandparents, children and students as they patiently waited to enter the third Annual Mardi Taus event.

Mardi Taus is an event sponsored by NKU’s chapter of Alpha Tau Omega for St. Elizabeth Women’s Health Breast Center. The event is similar to a carnival with black jazz band, bingo and a newly added duck regatta; to promote fun and engagement among attendees.

“I like seeing all the guys come together. We all have school and a lot of things to do but to see that we can take our Saturday night and come out here and just help people that we don’t even know, total strangers for a good cause is definitely why I do this,” Alpha Tau Omega Philanthropy Chair Seth Martin said.

Last year Alpha Tau Omega raised $27,000 to support St. Elizabeth Women’s Health Breast Center . This year they are on their way to beating those numbers with $22,000 before the big event.

Martin and the Fraternity President Benjamin Read were featured on Fox 19 News during their ‘Think Pink’ to try to get their event out there.

“It’s good bonding time with our brothers, we get to coordinate something and it kind of adds to the brotherhood, the love towards each other but also it’s going towards a good cause,” Read said.

Friday night Alpha Tau Omega had a benefit at Turfway Park in Northern Kentucky to help raise money before their main event; Mardi Taus. This also gave the attendees of this benefit to get prepaid tickets for the event the following evening.  This benefit had dinner, drinks, silent auction and a raffle. Parents of brothers, alumni and friends all receive invites to this event. Turfway offered the fraternity two packages, three hours unlimited drinks at the bar or food and drinks.

During the benefit, the liquor well barrel raised $6,090; $400 was raised from raffle tickets and $130 in the wine ring toss. At the door they made around $4,000, so they at least made $10,000 from their benefit on Friday night; which is three times more than they made last year.

Read believes that  this event allows his fraternity brothers to bond and connect on the same level.

Read’s grandmother passed away from breast cancer when he was in eighth grade, so he is very passionate about this event.

“She was probably my favorite person in the world and a big impact on a lot of things that I do in my life, just helping people so they don’t lose someone like I lost grandma is very important to me,” Read said.