‘All hands on deck’ NKU’s going for the gold 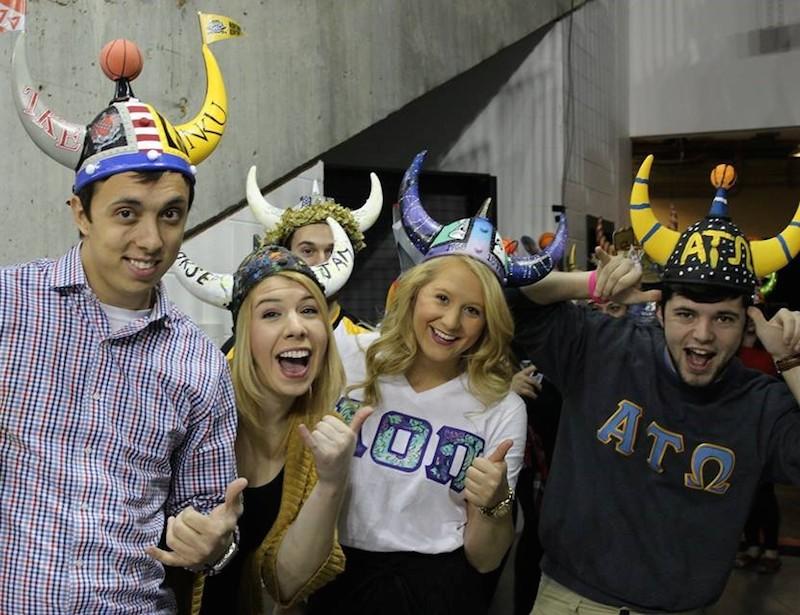 Students participate in the 2015 Homecoming helmet decorating competition. This is organized by the Activities Programming Board and the Homecoming Committee.

With the events of Homecoming 2016 well underway, the Homecoming Committee and the Activities Programming Board are fighting the pressure by enlisting co-directors and taking on the job with partners.

“Homecoming has a lot of pressure attached to it and they have handled it very gracefully and they have everything together,” Leah Koch, advisor of the Homecoming Committee, said. “It makes me very proud to not have to get my hands in it too much because they’re doing it all and being rockstars at it.”

The co-directors are trying to get people excited about being at NKU and want to take the stress of the New Year off student’s minds with fun homecoming events.

“I feel like homecoming is kind of a big deal for freshmen, at least it was for me,” Clark said. “It is eye-opening because you’re scared coming in to a new school. If you get really down to it, it comes with a lot of spirit. We want to keep that going, where one week everybody can just have fun.”

This is Clark’s first year being on the Homecoming Committee and she has enjoyed having a partner to work with.

“By having Emily as co-director, it relieves a lot pressure and helps you learn how to work together as a team because that doesn’t end as you move into your career,” Clark said.

Clark wasn’t sure if she would be the co-director of the Homecoming Committee this year but once she got more involved she understood how valuable it is.

“I realized that it’s going to be a good resume builder, showing that I have responsibility,” Clark said. “I can plan this huge event and learn how to network. I feel like that’s been the most important part of it. I’m growing from it.”

This is Powell’s second year on the Homecoming Committee and she hopes to gain new experiences and build on last year.

“It’s a great fun, leadership opportunity to take advantage of,” Powell said. “Every year I hope it gets bigger and better and even more people participate.”

It was the Homecoming Committee’s decisions to pick the theme. They heavily discussed how they felt campus would react to it.

“The idea behind the Olympic theme, as a whole, was because the 2016 Summer Olympics are coming up this year, so we thought it would be fun to incorporate that,” Powell said. “Go for Gold was because of our colors and meshed really well.”

Clark thinks the theme is perfect because NKU is gaining more recognition.

“NKU is starting to get their name out there,” Clark said. “I can think back to when I was applying to schools, nobody knew about NKU. But now, they’re starting to come out on top, even more within the next few years. So, I thought we could use that as a metaphor.”

“That’s basically what our society is today, so why try and fight it,” Clark said. “Also, we’ve used Norse sync, This Week newsletter, and the presidents of organizations were emailed so they are updated on what’s going on.”

They have also tried to find a balance between a variety of traditional and new events.

“For homecoming we’ve always had a lot of traditional events, so then we have maybe one or two days where we can change it up and bring in something new and fun,” Koch said. “So it’s trying to be creative with those couple days and maintaining the tradition behind homecoming.”

The Homecoming Committee is a small part of APB. There are about 10 members of the committee while APB is comprised of about 30. APB members are integrated to help facilitate the events upcoming in the next week.

Other organizations that have helped the committee and APB are FSLC, NLS, Campus Rec, Student Union, NKU Housing and the Alumni office.

“We are very thankful for collaborations among departments and feel very welcomed,” Koch said. “It’s all hands on deck.”