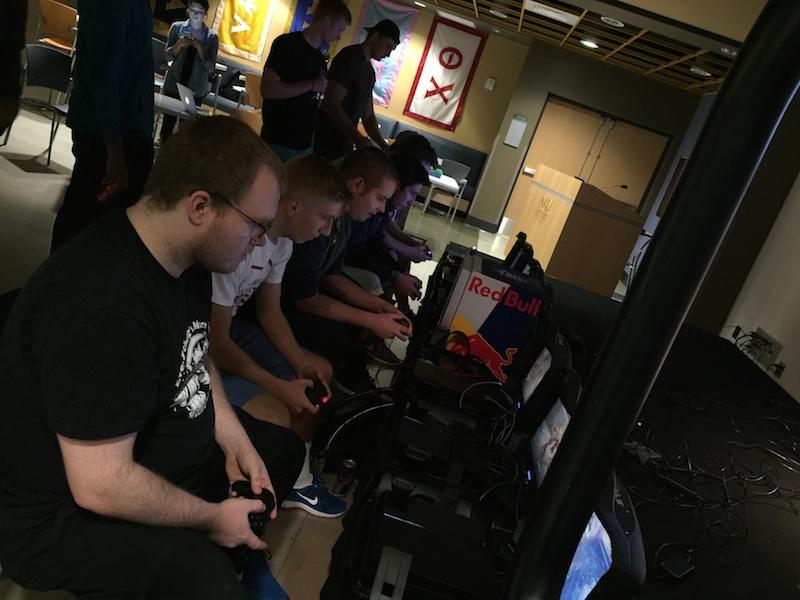 Players take part in the event. Red Bull took on as sponsors.

Hectic chatter could be heard from the squads of three completing missions in Destiny, one of the biggest shooters to hit Xboxes and PlayStations in years. Speed and efficiency were key in these missions while players tried to finish objectives in as little time as possible.

“Fourteen months after launch, I’ve clocked in just under 1600 hours in Destiny and I’m still not bored of it,” contestant and fan David Wilmes said.

Destiny comes from the Bungie, the makers of Halo, a pioneering shooter amongst video game fans. In Destiny, Bungie again pioneered a whole new kind of shooter – one that blends objective-based combat and a plethora of modes to keep players engaged.

“I got in on the closed alpha version of the game last year,” Wilmes said. “From there, I played the beta and later, the full game.”

With the recent release of Destiny’s “The Taken King” expansion, players who have dropped off are coming back in droves, with new players able to jump in and have the same sort of fun.

“Ever since Destiny came out I haven’t been able to put it down, and it’s the first game I’ve ever really sunk this sort of time into,” Wilmes said.

Red Bull’s Clash Course tournament series prompts gamers to group up into “fireteams” and complete short missions known as strikes, which clock in around 20-30 minutes for the average Destiny player. Most teams at NKU’s Clash Course rounded off around the 9-minute mark.

“I’ve done community tournaments and events, but I’ve never been to an event for a shooter. When I found out there was a collegiate tournament in my backyard, it was a no brainer. What did I have to lose?” Wilmes said.

These positive sentiments resonate with players, finding Destiny as a nice outlet compared to its contemporaries like Halo and Call of Duty.

“This is why I like playing Destiny,” said Shane Sullivan, contestant and communication major. “It’s not like other gaming communities. People are more open and friendly to somebody new compared to contemporary eSports.”

The Clash Course itself was efficient, with Red Bull providing consoles, televisions, and of course, beverages to both contestants and spectators. There were many teams ready to compete, but just as many people cheering their friends on.

“One of the guys on my team was at a way lower level, but was still able to compete and help us. It’s inviting to new players in that regard, and gives players room to grow,” Sullivan said.

The beginnings of this tournament were planted over a period of weeks, with scavenger hunts featuring Destiny and Red Bull sprinkled throughout campus. These rewards were quickly gobbled up by eager players.

“I’ve gotten quite good at Destiny over the months,” Wilmes said. “I try not to showboat or be rude about it, but once I saw that there was an event like this near me, I had to try.”

The endgame for this tournament reaches a much bigger stage. Sixty-four schools representing qualifying rounds across the country were picked. Of those schools, the top two times from four regions will win a trip to Red Bull’s eSports gaming studio in Los Angeles.