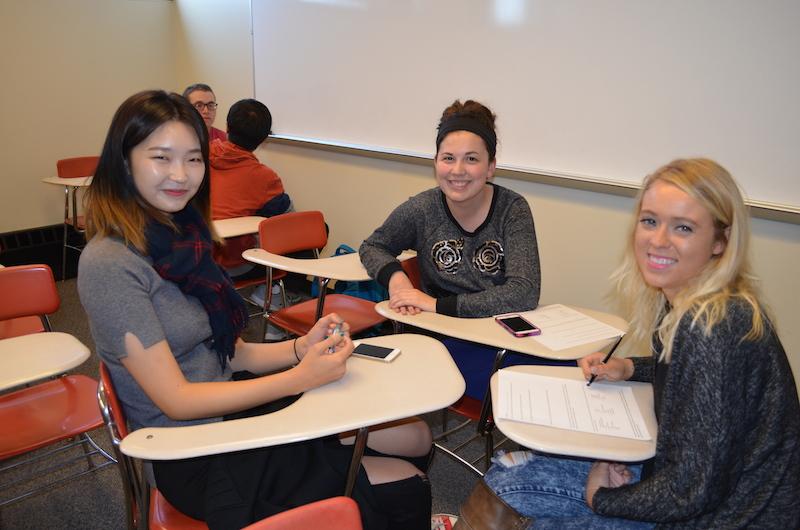 AEL students participate in a conversation partners session with another class at NKU. Now, Conversation Partners has gone beyond the classroom and students are paired with partners to meet on a weekly basis to work on their English-language skills.

Faris Almansour, a smiley Saudi Arabian student in the American English Learning Program (AELP), and American student Alyssa Richter were friends before they were paired together through conversation partners. Almansour said that conversation partners has only made their bond grow deeper. They meet on a weekly basis in inviting atmospheres, like the Starbucks on campus, to discuss everything from politics to differences in culture.

Despite growing up across the globe from one another, conversation partners works to break down not only language barriers, but cultural ones as well. Almansour said that although they  are from completely different cultures, he and Richter still have similar ways of thinking.

According to David Gutmann, the director and advisor of AELP at NKU, the idea of conversation partners started in a traditional classroom environment. The AELP students would be paired with students from another class for a day, and those students would have questions prepared for the AELP students.

“Our students felt very isolated and because of that we needed to find a way to bridge the gap between our students and the rest of the campus,” Gutmann said.

“It’s one thing for me to teach a class here at NKU and to teach [AELP students] about grammar, writing skills, and so forth,” Gutmann said. “It’s quite another for them to talk about foods, places to go…with other students. They feel as if they can learn a whole lot more English by talking with NKU students.”

Conversation partners is a program in which Gutmann pairs up an AELP student with either an American student or a student proficient in English. The pair then meets up in a more comfortable setting than a classroom, such as, Starbucks or the Student Union. From there, the conversations begin to flow between the pair. The partners meet together on a weekly or bi-weekly basis.

“The majority of our AELP students are internationals on student visas improving their English language skills to meet the proficiency standards for acceptance into undergraduate and graduate programs at NKU,” Gutmann said. “Participating in the conversation partners program is one of the best ways of practicing and complimenting what they might or might not have learned in the classroom.”

Almansour, with a grin  across his face, explained that part of the reason he loved NKU was because of the effort the campus has made in including him and other international students.

“I have a lot of friends, people who care about me, and people who want to learn about my culture,” Almansour said.

According to Almansour, many international students are initially shy and are hesitant to speak in public. Conversation Partners helps them feel more comfortable with their English-speaking abilities so that some of that hesitation diminishes. Almansour himself used to dislike speaking in public, but now he grown more confident.

“I can just talk in front of anyone! I have no problem with that,” Almansour said.

Not only does this program help with improving language skills, it also helps both students in the pair to learn more about different cultures.

“When there is language barrier there is a cultural barrier as well,” Gutmann said. “As soon as they can start communicating they can start breaking down that barrier. They’ll find differences, certainly, but I think that they’re able to appreciate and accept those differences.”

Maya Brlecic, an English-proficient international student from Croatia, Europe who is pursuing a master’s degree in English, is involved in the program so that she can help students who are in the same place she was when she first started  at NKU.

“Since I’ve been in [my partner’s] shoes many years ago, I know exactly how it feels like to land in a foreign country. I know what it’s like to know very little not only about the culture, but about the language too,” Brlecic said.

The partner she was paired with, Fatou Coulibaly, is from the Republic of Mali. The Republic of Mali is a country in West Africa. Not only does Coulibaly get to practice her English with Brlecic, as well as learn about both American and Croatian culture, Brlecic also gets to learn about the culture of Mali, which she knew little about beforehand.

“I’ve learned about their history and culture. If I ever decide to go and visit, I am pretty sure that I’ll have someone to call up and hang out with, which is pretty cool,” Brlecic said.

Gutmann said that they want to draw more American students into the program, which would be beneficial to not only the international student, but to the American as well. The conversation partners program helps encourage students from America to study abroad and give them a more expansive worldview.

Almansour noticed that a lot of Americans lacked a knowledge of his culture, although many were eager to learn more about it. He said that he thinks American education often focuses on an Americanized view of history and culture.

“I blame the educational system, not the people. The people are good,” Almansour said.

Still, the conversation partners program within AELP is a way to, as Gutmann described, bridge the gap between the international students and the rest of the student body. Gutmann stressed the need for volunteers to participate in the program, which is still relatively new.

To create a vibrant community within NKU, Gutmann explained, the international students and the American students need to collaborate and work together as an entire community. Conversation Partners is just one step towards this goal.