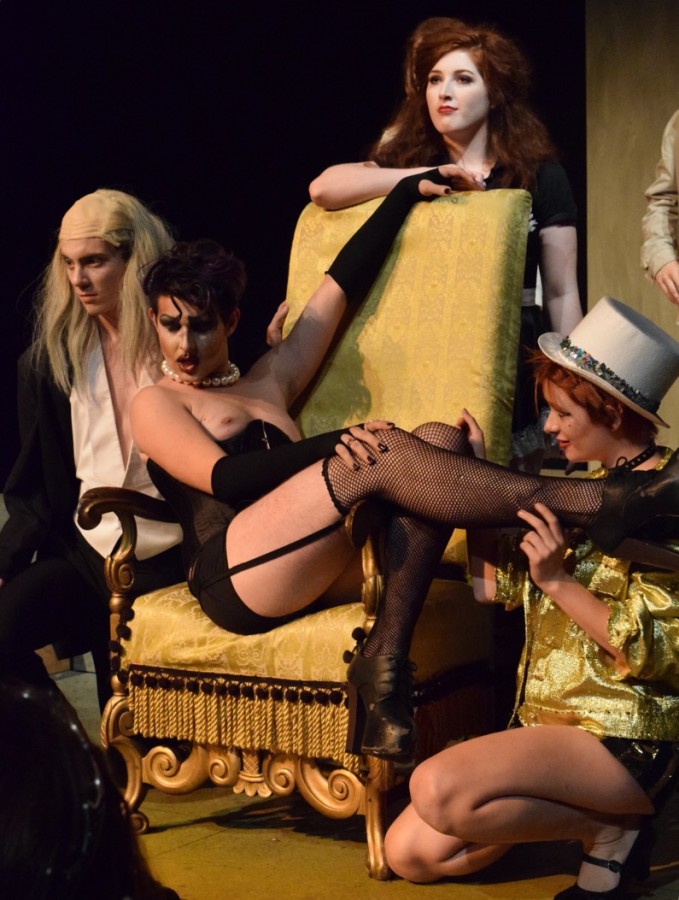 Frank-N-Furter’s opening song, “Sweet Transvestite” comes to a close. Frank-N-Furter, who sits in the throne and is surrounded by his servants, is portrayed by Josh Newman in NKU's “The Rocky Horror Picture Show” shadowcast production.

The 1975 musical comedy horror cult classic film, Rocky Horror Picture Show, played in the background as NKU students donned in fishnets, corsets and just their underwear brought the movie to life through a shadowcast production on Halloween night.

Many of the audience members were also dressed in risqué costumes as a homage to the show. Audience members new to the show were marked with bold red Vs on their cheeks to mark them as Rocky Horror virgins and were brought to the stage to initiate them to the experience that is the Rocky Horror Picture Show Shadowcast.

Andrew Allen, a freshman who was a virgin to the show, said that the production was unlike anything he’d seen before.

“It was definitely an experience. I don’t really know how to feel right now, honestly,” Allen said. “I’m still processing it.”

The show took place in Stauss Theater on Halloween at 8 p.m. with another showing at midnight. The production was student run and produced. The cast has been working since about the middle of September, according to director Zach Robinson, who is a BFA acting major at NKU.

“It’s been a lot of fun. A lot of hard work and a lot of rehearsals, but a lot of fun,” Kairi Freudenberg, who portrayed fiery red-headed Columbia, said.

As far as what the NKU production did that other productions haven’t, Robinson cited their dedication to the accuracy to the film in their performance.

“[Other productions] treat [Rocky Horror Picture show] like it’s the Wild West. [Other productions] go out there and just put people on the stage and hope it goes well,” Robinson said. “I strive for perfection in my actors’ faces, their lips matching the screen to a tee. [My actors are] committing their minds and bodies fully to the roles.”

That’s not to say that the cast doesn’t also have a little fun with their portrayals. According to Josh Newman, who played the iconic Tim Curry role of Dr. Frank-N-Furter in NKU’s production, the cast threw in a little bit of improv and brought unique spins to the cult classic.

“[Rocky Horror Picture Show] takes you on this trip of two people’s sexual awakening which I think is unique to the theatre world. That’s why I think people find such an affinity with it,” Robinson said.

Rocky Horror Picture Show is meant to be a performance where both the audience and the performers can free themselves from societal norms. The original film explored subject matter that was unlike what anyone had seen at the time it was released.

The main character, Dr. Frank-N-Furter is a self-described “sweet transvestite from Transexual, Transylvania.” During the time when the film was first released people weren’t as accepting to anything outside of the gender-binary norm, according to Newman.

He went on to say that Rocky Horror helped bring conversation about gender-variation into the mainstream. There are more open conversations about those who fall into the non-binary categories, trans people, and drag queens as well, according to Newman. “People celebrate a person being like ‘Here I am. No matter what I look like I’m still working it.’ That’s a lot different than what it was in the ‘70s,” Newman said. “The original Rocky Horror audience was not as accepting or excited about it as [the audience is] now.”

Newman also said that Rocky Horror was a place for him to go to feel free after he came out. He has played Frank-N-Furter once before as well as has performed in drag several times.

Newman said that the cheers the cast gets once they come out on stage is always amazing.

“Everyone is still so impressed and so infatuated [with Rocky Horror Picture Show] because they’re rebelling against societal norms,” Newman said.

All in all the show aims for an open and fun atmosphere while staying true to the original film. Laura Wyle, an audience member dressed in a white robe and white underwear, said that she continues to come to productions because of the carefree and accepting atmosphere.

“One of the big ideas in Rocky Horror is ‘Don’t Dream it, be it’ which is something that my character says near the end. [People] shouldn’t have to dream it [they] should be able to just go for it,” Newman said.

NKU students explored the concepts presented in the Rocky Horror Picture Show through their shadowcast production and in the end, they got a standing ovation before running to the seats to greet the audience, who also brought life to the show through their own participation.