GALLERY: The haunting of Callahan: The legend of ghost Millie 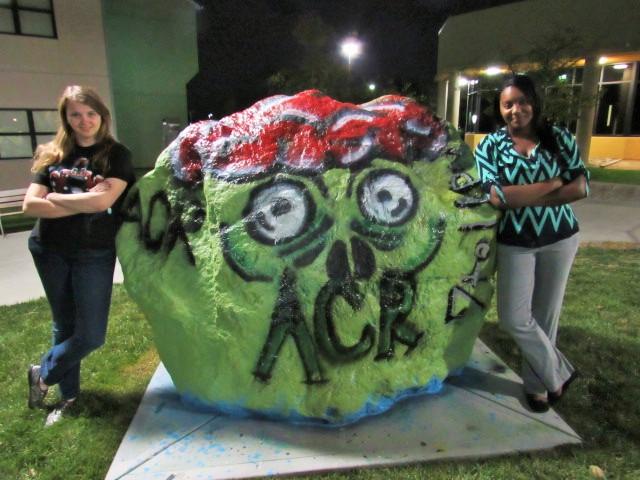 Piercing shrieks echo through the basement rooms of Callahan residence. Strobe lights flash frantically as NKU students timidly make their way through the maze of hallways. Monsters await at every twist and turn, leaving them with nightmares and a lingering fear of the dark. There’s a sigh of relief as students reach the exit, but little do they know the most frightening creature is about to attack, the legendary ghost of Millie.

Callahan Hall was once Lakeside Place Nursing Home, a fully operational healthcare facility. Rumor has it that a cruel woman known as Millie Dimler was in charge of the program and allowed the patients to be neglected and abused, even participating in the mistreatment sometimes.

According to LawyersandSettlements.com, the facility was investigated by the state of Kentucky for several complaints of negligence that led to the deaths of some patients.

“One day Millie came into her office and some of the patients had taken their own medication and drugged her, which killed her,” Brandy Brawner, vice president of the Association of Campus Residents (ACR) said.“So now she haunts Callahan’s basement, stirring around her old office.”

ACR is in charge of Callahan’s Haunted House that is inspired by Millie’s story.

“A week or so before our haunted house last year, I went downstairs and was walking down one of the hallways, making sure everything was set up correctly,” Brawner said. “Out of nowhere things just start falling behind me, boxes and papers. It was so creepy. I’m not a person to believe in that kind of stuff but it was just spooky. I couldn’t explain it to anyone. I’m assuming it was Millie.”

Different themes have been used throughout the years, but the tradition of Millie remains. According to Brawner, referencing the building’s past as a nursing home draws the largest crowds.

This year marks the eighth year for Callahan’s Haunted House. It happens 7 to 11 p.m. Thursday. Admission is free.

Bethany Ellen, a junior majoring in public relations, played Millie the last two years and was so shocking, she made two male students cry.

“There were these two boys who came downstairs, who had no idea the haunted house was going on,” Brawner said. “They were so scared, all they wanted to do was their laundry. One of them started crying and I felt so bad but had such a sense of pride.”

Ellen stood at the end of it, in the stairway, and as people were leaving, she would jump out and scream, “It’s not over yet!”

“I led them up the stairs and had forgot Bethany was waiting there,” Brawner said. “She screamed at them and the other one that wasn’t crying, started crying. I took them to the waiting room lounge area and gave them cupcakes and apologized. It was awful but great at the same time.”

Ellen, who has been involved in the haunting industry for five years working at Kings Island’s Halloween Haunt, is very impressed with the success of Millie’s story and how ACR manages to scare with little funds.

“I’ve seen all the dynamics that you put into a haunted house and it’s amazing to me that ACR can put on such a successful experience with such a low budget, each year,” Ellen said. “It’s one of my favorite houses.”

More than 300 people showed up to last year’s house and ACR is hoping for an even bigger number this year.

“ACR created a Twitter and Facebook page for the event and painted the Spirit Rock in front of Norse Commons,” Dana Jetter, the president of ACR said. “Since we’re advertising it more, we hope a lot of people show up and our excited about it as we are.”

On Wednesday and Thursday there will be volunteer students dressed up us nurse zombies, promoting the haunted house.

“We’re trying to really amp up our advertising and nothing gets your attention like a nurse zombie student limping around campus,” said Jetter.

The props, characters, and special effects are completely revamped each year in order to ensure that the event will never disappoint.

In his first year as a scarer, John Kincaid, a sophomore majoring in marketing, hopes to be as startling as Ellen.

“I want to be so haunting that people will remember me,” Kincaid said. “My idea for my costume, since it was a nursing home, was I could be an old man. You see the back of me, hunched over a walker, in an empty hallway. Then I drop the walker and jump around, then others join me, scaring the daylights out of them.”

Kincaid says that there is a ghostly feel in the atmosphere of Callahan’s basement.

“There is definitely a presence of some kind down there, especially at this time of the year,” Kincaid said. “Everyone can feel it.”

The Callahan Haunted House is one of the largest events on campus during the fall semester. It takes all members of the ACR to fill a certain task or job within the event.

Tasks include tour guides, actors, set-up, tear down, and working the waiting room and snack area.

Anna Yockey, a junior nursing major, went through the house last year and thought it was a very memorable experience with her fellow residence.

“My tour guide was so good,” Yockey said. “She was scary but also helped our group get through it, so that made me want to become one. I’m not a very scary person, I’m pretty sweet actually. I think it will be fun to get out of character and show my residence a different side of me.”

Yockey thinks that the best moment of being a tour guide is going to be in the very beginning, when she abandons her group in the elevator.

“A lot of people got totally freaked out when our guide left us in the elevator on the way down to the basement,” Yockey said. “They don’t know what to expect. Once that door shuts and no one’s in there with them, they’re like, ‘What’s happening?’ People have died there. Thinking about that is disturbing.”

Yockey is prepared to deal with students who might accidentally hit her or grasp onto her.

“The group I went with last year, were clinging on to our tour guide,” Yockey said.“One of them almost ripped the sleeve off of her jacket. With being a tour guide you have to be okay with that sort of thing.”

Volunteers arrive at Callahan to set up at approximately 1 p.m., making Halloween themed treats, preparing decorations, and the beginning stages of the basement décor. At about 4 p.m., the actors arrive for prep, getting their faces painted and being instructed on where their location will be throughout the haunted house.

In addition to the basement, ACR has also set up a waiting area on the ground level of Callahan Hall. This area has snacks and drinks, music and games, where students can hang out after their tour has ended. It’s also where students sign in and are assigned a tour number. Each tour group consists of about eight students.

At the end of the thrilling night, participants are rewarded for their performance with pizza.  Volunteers get to relax and reminisce about the night.

Lauren Mountain, ACR’s advisor and the Northern Terrace Hall director, says this is her favorite part of the haunted house.

“We get to share stories of people’s faces or reactions to the house and get to hear firsthand accounts of how our volunteers enjoyed being involved in the program,” Mountain said.

Millie is waiting for the fearless who ventures into the eerie hallways of Callahan’s basement.

“Be prepared to be petrified,” Brawner said. “You’re going to have nightmares.”