VIDEO: Hope and finding a cure; Hope and raising awareness; Hope and Relay 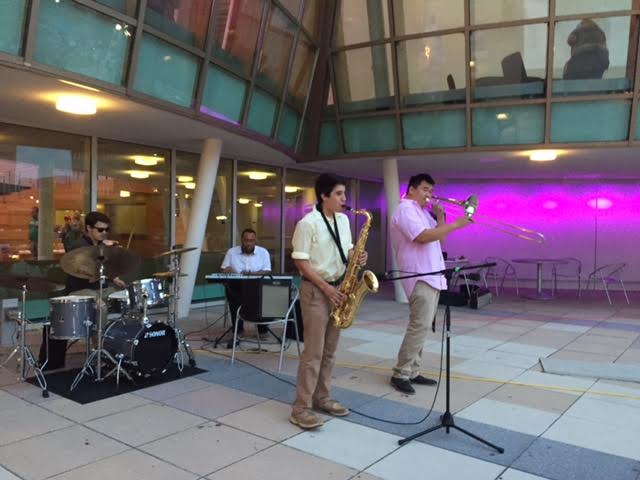 The jazz band livens up the crowd. Relay for Life took place on Friday.

Hope found its way onto NKU’s campus as students, faculty and campus organizations dedicated their time and energy to raising money and awareness for cancer during Relay for Life through its new glow theme, jazz music and inspirational activities.

The university brought together 42 groups who all brought forth new interactive ways for community members and students to fundraise for the cause, which resulted in a grand total of $27,139.59 and a two-year total of $56,539.84.

To start the evening off, a jazz band brought liveliness to the crowd while others made their own kazoos and joined in. Soon after the survivor and caregiver ceremony began, it was followed by leap frog, singing bee, limbo, Zumba and the luminary ceremony, just to name a few. Organizations on campus set up booths for baked good sales, craft sales and games.

Drew Bamberger, senior social work major, has involved himself in relay for the last two years. But with his connection to tragedy, he chose to oversee the event to attempt to make a difference in other’s lives.

“I got involved last year because my thing was, someone is less fortunate than me,” Bamberger said. “I was given a second chance myself, so giving them a second chance is important to me through fundraising.

“When I was 7 I had a traumatic brain injury. I ran into a tree going downhill on a bike. My recovery and the support that I had and just the second chance … 15 years later and I’m still here, you know? God allowed me to give back. I owe it to others to give back.”

Sigma Alpha Iota, the women’s music fraternity on campus, chose to give back by selling baked goods and cookbooks with recipes from current and past members of their chapter.

Eden Smock, junior music education major, stated that this was their first year to participate in NKU’s relay.

“I’m really good friends with Drew [Bamburger] and he was like ‘Hey, you should get a team together with Sigma Alpha Iota’,” Smock said. “These three [other women] are new members so I was like hey, let’s make a bake sale and this will be your guy’s community [service] project.

“I just like the atmosphere and how everyone is so giving and trying to work together to help fight cancer. I’m just really surprised at how many people are here tonight.”

Rebecca Gallaher, a newer junior SAI member, agreed that she appreciated the care and thought the university put into the event.

“I’m proud; this is my school, and if they are willing to do this much stuff for people they don’t even know and raise money for good, I mean that just makes my heart warm, you know?” Gallaher said. “My cousin passed away with bone cancer on his 18th birthday. My boyfriend’s mom passed away from stomach cancer, and then my mom actually had stage five skin cancer, melanoma, but she got that removed. She’s good now, but it really hits home and I got teary eyed, but it’s a good thing.

“If it’s potentially helping another person that has cancer then I’m all for it.”

Lindsey Helman, an alumni of NKU and proud supporter of her sorority Theta Phi Alpha, brought her mother and survivor of breast cancer, Pam Helman to celebrate cancer awareness.

“In 2008 I was diagnosed with breast cancer in December, and I had a mastectomy in the end of November. I’ve been cancer free since then. This is just so wonderful; so nice,” Pam said.

“I like that it’s welcoming for them [the survivors] and she can be a part of something for her cause,” Lindsey said. “I will be here until 2 a.m., but she definitely won’t be!”

“I can’t stay up that late anymore,” Pam said.

Many groups couldn’t wait to hear the motivation that they knew would come from the survivors’ and caregivers’ stories.

“They [the stories] give me the chills,” Bamberger said. “Our two speakers today; one was a freshman from NKU; an 18 year old. The emotion that she displayed talking about how her family was her backbone and how she relied on them to get her through it and she is doing well now. And we had another woman … she’s a mother. She had cervical cancer, I want to say, and then she was diagnosed with breast cancer. So she had two different cancers and her last treatment was actually today. She’s cancer free.

“Relay instills hope for the survivors and caregivers.”

Ryan Gray joined the Student Alumni Council as an incoming freshman and was more than willing to give his time recruiting corn hole teams by enticing them with NKU magnetic drawing boards.

“We had more people sign up than I expected,” Gray said. “It should be fun to watch.”

Some of NKU’s very own, much like Gray, participated not only to support their organization but to be a representative for someone very close to them.

“My stepmom’s mother had breast cancer; she survived,” Gray said. “She was cured last year. Anything that has to do with breast cancer or cancer I’m always somehow involved. I’m here to support everyone else, but she’s the main reason I sort of got involved with everything revolving around cancer. It really does open up your heart to see everyone come together to support such a great cause. It makes you feel like there is still good in the world.

“When we had the breast cancer survivors walking around and everyone was clapping for them, personally, if I were in their footsteps, not saying I should be or that I deserve to say this, but having tons of people here to support them kicking cancer’s butt; that had to be a really great feeling.”

“I really believe in giving back. If you are given a lot, you should be expected to give a lot.” – Drew Bamberger

Katherine Herbort, co-captain of Alphi Phi Omega, and Emily Marsala, Vice President of External Service, both gave time and effort to paint faces with glow in the dark paint to enhance the glow theme of this year’s relay.

“Well, I guess you could call this almost glow in the dark paint,” Herbort said. “There are just so many lights right now; you can’t really tell if it is glow in the dark!

“The face painting brought a lot of people in. We hadn’t even finished setting up and there were like six people already waiting to get their face painted. The ring toss has been more for fun; nothing too serious.”

The two women have both been involved with the relay on campus since 2010; both seeing it progress over the years with hopes to someday find a cure.

Marsala was diagnosed with Whilms Tumor when she was two years of age. Soon after she turned seven, it came back, putting her through treatment for a few years more.

Whilms Tumor is a juvenile kidney disease which led Marsala to eventually having one kidney fully removed and the other partially removed.

“I remember the basics of what was going on. I was just too little to understand the fear. My parents went through it and that is harder for me to deal with than what I went through because I had so much support that I didn’t really feel like I knew what was going on entirely. Now I know, and I’m grateful I didn’t really understand. It’s scary stuff.”

Despite the age, time, or place, cancer has affected the lives of many. But with the help and donations from NKU and the Northern Kentucky community, we are one step closer to finding the cure.