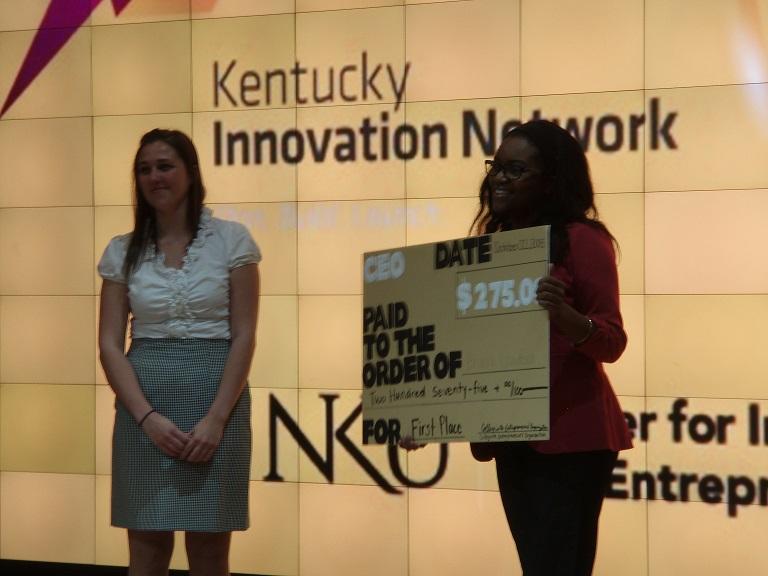 The contest, labelled Pitch your Treat, consisted of five finalists that submitted their original business proposals a week earlier.

Four outside judges were selected to choose a winner. Judges included Casey Barach of

“Because of the help I received from NKU as soon as I graduated I was able to hit the ground running,” Young said.

Young whose Vegy Vida a condiment idea which removes the bitter taste from vegetables, won him the Southeastern Entrepreneurship Conference pitch competition in February 2015 said he now wants to be able to give back and help others realize their potential.

Each contestant was given 60 seconds to explain his or her business idea. Each pitch was followed by a three minute question and answer section from the judges.

“The idea for the competition comes from if you meet a potential investor in an elevator and you only have 30-60 seconds to give them your business idea and sell it to them,” Samantha Pearson, senior and President of CEO said.

As each contestant stood, his or her pitch was different, unique and innovative. Contestants’ pitches covered new apps and games, creating a hands-free hair dryer, leisure party cruises, and personal shopping.

“It’s interesting I’m not an entrepreneur major but I took a marketing class that gave me my idea,” winner Briana Crawford, junior PR major, said.

Crawford’s idea was about a mobile app that seamlessly connects shoppers with a mobile stylist nearby. The stylist for a small fee will help you shop.

“I may be able to change your life, or at least change the way you style,” Crawford said during her presentation. “We are still in the research phase but I think the fee will be about $25.”

The crowd responded with strong applause for each idea. The contestants stood confident with their visions of success.

“We thought it was a really good idea for all students, not just entrepreneur majors,” Pearson said.

The event even drew support from the Economics club who entertained while the judges deliberated.

“We are here to develop a sense of community with the official shirt of Norse,” Will Weber, senior and President of the Economics club, said.

The club had a booth advertising the Gold Shirt. Which is a black t-shirt that students can purchase for $10. All the proceeds go to a scholarship for NKU business students.

Pizza, appetizers, cookies and candy were provided by Barach for all involved to share and network after the hour long competition ended.

Even though only a few took home cash prizes, this interacting and opportunity to make connection left everyone in attendance leave feeling like winners.

“Our goal is for the competition to be something positive that every year the students know about and anticipate it to happen,” Pearson said.