Phi and SAI get pied 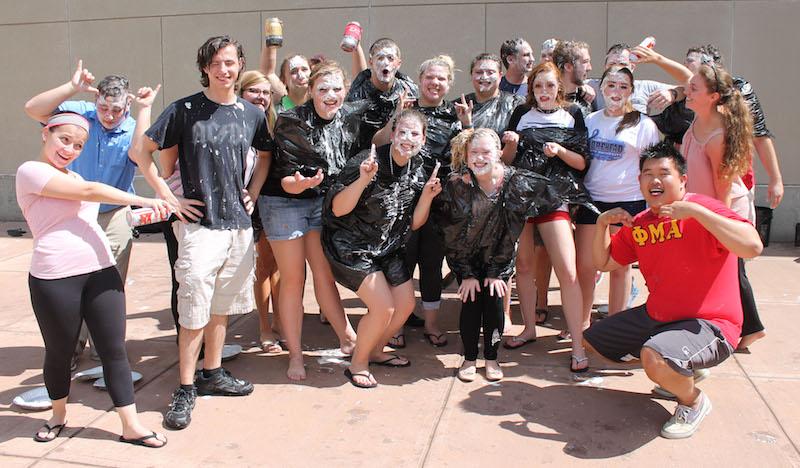 The group that took part in the smack down. They were then pied!

Pie could be seen flying Thursday as music fraternities Phi Mu Alpha and Sigma Alpha Iota hosted a Pie Smackdown in the Corbett Amphitheatre to raise money for their organizations.

The sun was hot, and the pies and laughter kept on coming as more and more students showed up to pie unlucky members in the face. Eden Smock, vice president of SAI and vocal education major, stated that the rules are simple. You pay $2 to pie a member of your choice, and $3 to pie a faculty member, and the students took them up on that offer.

“Mostly the guys were pieing each other, so that’s why they ended up winning in the end,” said Smock.Smock went on to say that that they got the idea for the event from their national headquarters and that the event was just another great chance to work with ΦMA again.

“Since we’re both music fraternities on campus we like to collaborate a lot for fundraisers so we decided to join together for this event today,” Smock said.

Brian Butler, ΦMA member, stated that he wished they could collaborate with SAI more often.

“It’s a great money making opportunity for both organizations,” Butler said. “There have been times in the past when we didn’t collaborate as much as we wanted to, and both presidents now, Heather and Conrad, made it a top priority to come up with more social collaborations.”

Scott Brown, head of the fundraising committee for ΦMA stated that while they don’t plan to do a pie smackdown event again for a while, they are planning another food-related event.

“On Sept. 17 we’re holding a fundraising event at Skyline, we get 10 percent of the entire day, but you have to mention us at check-out,” Brown said.

This is yet another event to help support the music fraternities to achieve their objectives of advancing music in America.

The pie smackdown had a great turn out and was so full of whipped cream that it caused many passersby to stop and wonder what all of the screaming and laughing was about. Smock stated that she was glad that they ended up hosting this event.

“The event turned out very well, we both profited from the event that we held today,” Smock said.