Hypnotist returns to Victorfest with surprises in tow 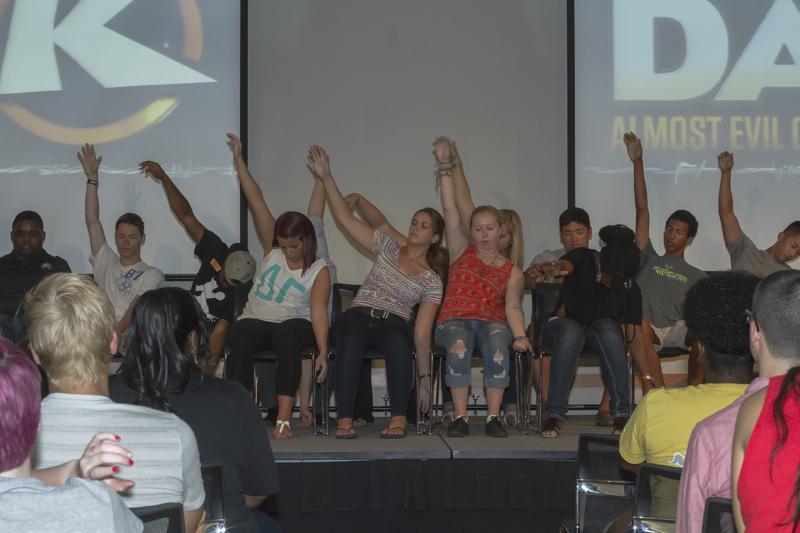 Students take part in the hypnotist's show. Dale K has been a familiar face at Victorfest.

Dale K was greeted to the stage in the Student Union Ballroom with a resounding drumroll as NKU students anticipated the antics that were about to unfold on Tuesday night.

Dale K, who is also known as ‘Almost Evil Hypnotist’, has been a returning favorite to NKU’s Welcome Week for the several years.

Natalia Weekly, executive director of the Activities Programming Board, claimed that the event is popular among NKU students due to the event being highly involved and allowing the audience members to participate.

Although many might perceive hypnotism as a trick orchestrated by the hypnotist, Dale K sets out to prove that he is less of a trickster and more of a man with a talent to expand his audiences’ imaginations.

He claimed that audience members might even fall under his spell.  In one particular instance, an audience member joined the stage after being plucked out of the audience for falling into a state of hypnosis, along with other volunteers already on stage.

Aaron McAlphine, a junior in secondary math education, “loved seeing the unexpected throughout the performance.”

“When Cara, [a volunteer], thought she saw the hypnotist naked, that was the most hilarious thing I’ve ever seen,” McAlphine said.

From hypnotizing volunteers from the audience to believe they’re Kanye West to volunteers believing they were the first males to give birth to babies on stage, the audience roared with laughter throughout the entire performance.

Mary Nedderman, a sophomore majoring in psychology, claimed to be an expert after to seeing multiple hypnotists perform live.

“Dale K is a true professional hypnotist,” Nedderman said. “I laughed, I cried, I would watch it again.”

At the start of the performance Nedderman admitted to being skeptical. However, by the end of the show she was already looking forward to possibly seeing him in the future.

“I would participate,” Nedderman said, “I almost felt hypnotized myself, as an audience member.”

The Almost Evil Hypnotist claims that he is no mind controller, but rather works to pull out the imagination of the audience and the volunteers.

“The entire show is about getting you comfortable on stage,” Dale K explained.

His tricks won’t work if a volunteer is trying to close their mind to the idea of being hypnotized.  This act was focused on getting the volunteers and the audience to think outside of the box and use their imaginations to express their reactions to whatever Dale K is attempting to have them act out.

Dale K left the stage like he came, to a roaring crowd. The audience gave him, and the volunteers who would snap completely out of their hypnotic state as soon as they left the room, a standing ovation.