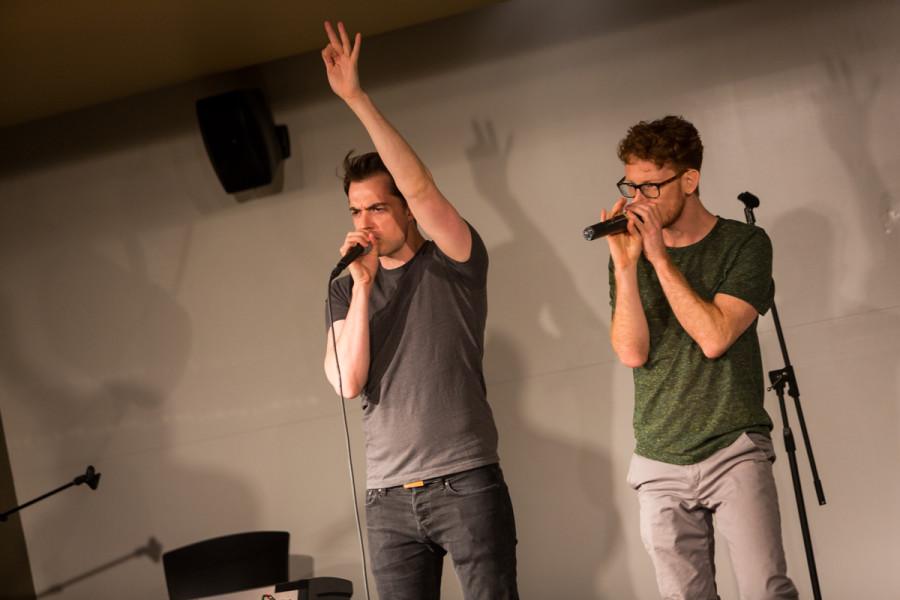 Two men walk onto the stage; one sits at the piano and begins to play, the other stands behind the mic and sings … nothing. He stands there, and he simply stares at the audience and does … absolutely nothing in awkward silence.

The two men also claim that song was their number one hit. It’s also available on iTunes for only $1.29, just so that everyone is informed in case anyone was interested in buying it.

These two men are otherwise known as Dakaboom, the duo comedy act from New York and Los Angeles, or individually known as, Paul Peglar and Ben McLain.

The Activities Programming Board, “APB,” at NKU hosted the comedy show on campus in the multi-purpose room in the Student Union this past Monday night.

While singing about bowel movements and “cheesy” love songs, both performers managed to entertain the audience with their a cappella, loop stations, stand-up, sketch and crowd interaction.

“Okay, thank Heaven for everyone!” McLain said as he mingled through the crowd in search of someone to sing to.

Summer Farley, an NKU student, happened to experience this chemistry up close and personal when McClain jumped off the stage to take her hand and serenade her with a love song.

The Dakaboom madness all began when Peglar and McLain met in high school, and the two have been friends and co-workers ever since then for the last 16 years.

“I was from Cleveland, and when I moved to Northern California, that was when we met,” Peglar said. “And so we went to different colleges, but then we became roommates afterwards, and that’s when we started putting this thing together.”

After performing in comedic groups for a while, both McLain and Peglar realized they wanted to expand their talent.

“He [McLain] had been on a cruise ship, and he was like ‘I’m bored,’” Peglar laughed. “And so he called me and said ‘When I get home, let’s make a show and go to our high school and do a fundraiser for the arts department.’”

With no intention of touring, their show quickly escalated from a short act in L.A. to a tour that expanded to multiple colleges throughout the country for the last two and a half years.

“We know each other better than anyone else; we are married,” Peglar laughed. “We basically just say we are married. I’ll spare you some of the other things we say! But we don’t have to think around each other. People say they love our chemistry and that chemistry is effortless.”

Farley made sure to make her way over to Peglar and McLain to give them the hug they offer at the end of every show.

“We really do hug people after each show. It can be awkward since we fight during the show; we like to make it a riot,” Peglar said. “So that’s the best part; getting to share what we do. Colleges keep us hip.”

Due to McLain being a part of the 100 people on the planet who is currently in line to be one of the Mars One astronauts, both aren’t making future plans with the comedic act other than touring to various colleges.

“We are at a place where we like where we have been, but we are enjoying it for what it is,” Peglar said as he explained how his partner could make a one way trip to Mars at any given moment.

As they began to pack up and leave, Peglar had one last remark for NKU students and their experience on campus.

For more information on Dakaboom and their comedy act,  visit www.thedakaboom.com or follow them on any social media site.