Fraternity gives students a week of themselves 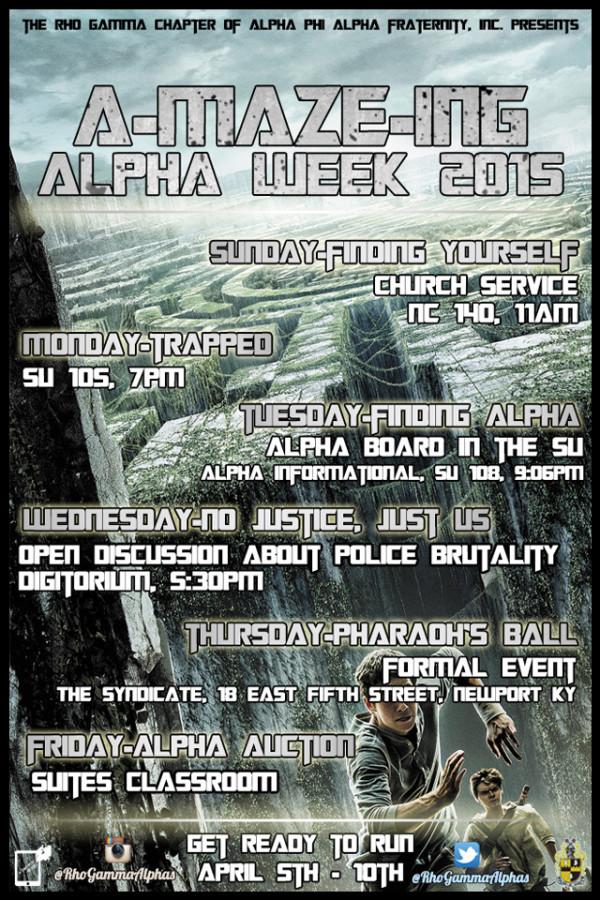 Alpha Week's flyer. This year is inspired by the film and book series 'The Maze Runner.'

This week Alpha Phi Alpha Fraternity Incorporated is giving students their yearly week of discussion, fun, and interaction.‘A-Maze-Ing Alpha Week 2015,’ offers events from a church service to a formal style ball. This year’s theme is based on the 2014 teenage action film “The Maze Runner,” dubbing each event a different task to be conquered as done in the film.

The Rho Gamma chapter believes the attendance of students is much needed for the success of the week, and putting in efforts to support them will result in self-benefits for students.

“I believe it is very important to attend the week of events, for the simple fact that the week has a program catered to various interests. Students who are looking for a welcoming Church Service, or want to participate in an open ended discussion about the current state of police in our society, or even relax for the week and attend our formal ball, this Alpha Week is ensured to please in diverse magnitudes,” Trey Hope, senior computer science major and president of NKU’s Rho Gamma chapter, said.

Students applaud the option of being able to choose from the various events of the week. Admitting that Rho Gammas creativity is something to look forward to.

“I like that we have different options throughout the week of what kind of event we want to go to, it really puts a creative spin on everything definitely,” Tionne Forest, junior education major, said.

Hope explained that ‘Alpha Week,’ has been a tradition of Rho Gamma’s. Students have supported this tradition, leaving them wanting Rho Gamma to hold more events throughout the school year.

“I really liked Rho Gamma’s week of events last year, I kind of want them to do more throughout the school year – I was salty I couldn’t make it to any of them this time but I’ll be at the ball,” Renee` Jones, sophomore undecided major, said.

As the week comes to an end, Rho Gamma will hold its 3rd Annual Pharaoh’s Ball this Thursday. Mostly advertised by the chapter’s social media accounts, Hope explains this particular event is the one he’s looking forward to the most, and it welcomes more than just current students.

“It’s a chance for a lot of the alumni members of my chapter to come back and see the progress that we have put in, as well as a chance for the campus to experience a party atmosphere while having an elegant feel throughout the night,” Hope said.

This year’s Alpha Week has not only especially welcomed Alumni, but new members of Alpha Phi Alpha as well.

Adding on to the week’s excitement, Rho Gamma saluted three new members into their chapter this past week. The new members’ first interaction with their peers as Alpha men, has been ‘A-Maze-Ing Alpha Week 2015’ along with their probate night last Thursday.

Hope explains that the men have been excited, and productive work is ahead for next year’s ‘Alpha Week.’

“I can definitely tell by their enthusiasm, persistence, and positivity with this week that they are enjoying it undoubtedly. By the end of the week, I’m sure they’ll be amped enough to throw twice as many events for the campus for the 2015-2016 school year,” Hope said.

For more information about how to obtain tickets for this week’s Alpha Ball, contact Leonard Abell via Instagram @LA_THEEXECUTIVE. Tickets are on sale for $10, and VIP tables are available.