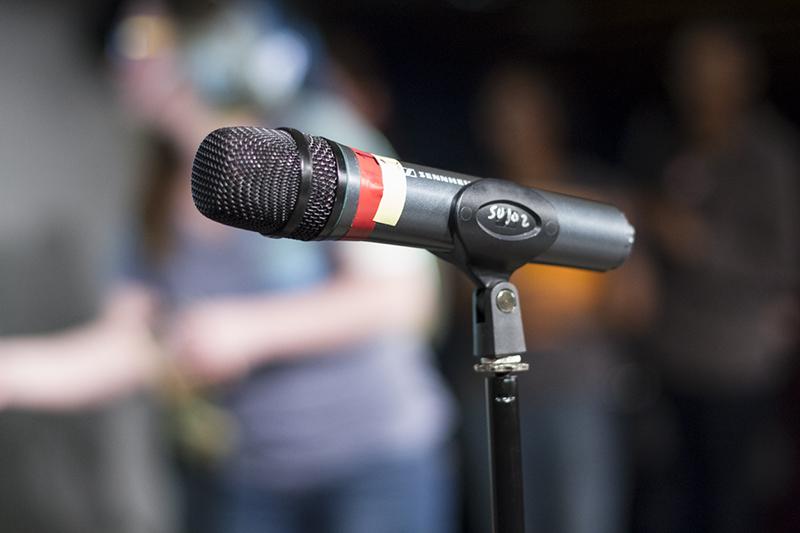 Junior English major Julia Brockman is sitting in the corner of the multipurpose room before the open mic night is set to start. Brockman handles her paper with shaky hands while trying to find comfort with her friends sitting around her. Before she is supposed to take the stage, she begins tearing up the extra paper she has in an effort to calm her nerves.

Brockman chose to read her poetry here because it was small and some of the students attending are her friends.

“I never read any of my poetry aloud except for in class,” Brockman said. “I just felt like it was time time to express myself. I’m nervous of how I’ll be received.”

Other students sit eagerly waiting to either take the stage or watch the performances.

Junior English/creative writing major Kristen Cummings came to support her friend and for her class. Cummings said she had to choose a literary event to attend and she found the open mic night to be ideal.

“I thought this would be a better literary event… Better than a better novel reading,” Cummings said.

Morgan Bell, who coordinated the event, took the stage first to introduce the performers. Students came up to the stage and expressed themselves through poetry, slam poetry, rap, and singing.

Two University of Cincinnati students read their poetry from the stage.

Mostly the poems consisted of personal experiences. Since this was an event for Norse Pride Week, a lot of the poetry and songs talked about the struggles in the LGBTQ community from their personal standpoint.

“It’s just about everyday life,” Brockman said about her poetry. “It’s like what they said, write what you know.”

Environmental science major, junior and LGBTQ ambassador, Kelley Ries, took the stage who jokingly admitted that she had forgotten the words last year, but was prepared this year.

Ries sang “Gospel” by Panic At the Disco and followed with a duet on “Just Give Me a Reason” by Pink featuring Nate Ruess.

“I’m always so nervous. We rehearsed twenty minutes before and I haven’t heard the song in two months,” Ries said. “But it was a lot of fun!”

Students cheered, clapped, and snapped their fingers during and after performances. With some of the poetry, students remained silent and focused.

The last student performer was Bell with a slam poetry reading before introducing the headliners.

“I’m still reeling over them,” Brockman said. “They were spitting many words and many wisdoms.”Check back at the Northerner.com for more coverage of Norse Pride Week events!