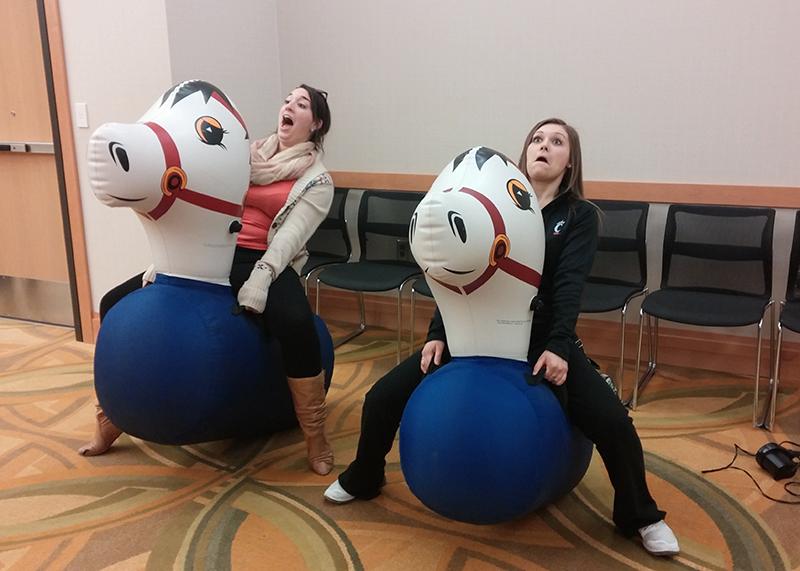 Students Clare Lees and Taylor Klumb​ having fun at the Student Union festival. The festival was Derby themed this semester.

Entering the Student Union unaware of exactly where to go, the smell of cotton candy led people to their destination. People in yellow shirts flourished throughout the student union, ready to guide visitors and answer any questions.

​The Activities Programming Board members in yellow shirts seemed nervous as only a few people entered here and there, as the Student Union Festival commenced at 7 p.m. However, they were satisfied to see more and more people flood in soon after.

​Aside from indulging in pop and cotton candy, visitors could participate in games including putt putt, horse racing on a large inflatable track, and the pie walk- in which guests played a game similar to musical chairs, where one could win an entire pie if the music stopped and his or her number was drawn. Laughter flooded in from the horse racing, as well as cheers about every 15 minutes from winners in the pie walk.

​The horse racing drew in a big crowd throughout the night. Players would line up, each on a blow-up horse, and wait for the signal to race their peers up and back the large blow-up track. Participants exited the float exhausted, as the next group readied their horses.

​“The horse-racing event allowed me to bust out my competitiveness. I got more than a victory out of this event, I got a friendship,” Sophomore Clare Lees said, referring to the girl she met at the event.

​“We are really aiming for the Kings Island experience,” Activities Programming Board member Mackenzie Kinman explained as she motioned toward the snacks and games. “The caricature experience is new this year.”

​In addition to multiple games, students could get their caricature drawn by one of two experienced caricaturists. As people waited in line, they spoke eagerly of the unique opportunity to receive a free caricature with their friends. In the room next door to the caricaturists, people waited anxiously for the photo booth. Guests could dress up in hats and big glasses and pose with their friends at this year’s Student Union Festival.

​With over 110 attendance. NKU students brought their younger siblings to accompany them.

​“I was so eager to win a pie at the pie walk,” UC student Taylor Klumb, who received word of the event through a friend at NKU, said. “I had never heard of Derby pie before, but it seems the members did a great job of developing this year’s theme.”

​As people left the event with their cotton candy fix, they seemed satisfied, caricatures in hand. With past years’ themes ranging from carnival to casino, and this year’s Derby theme, students will have to wait until next year’s event to see what APB members have in store.