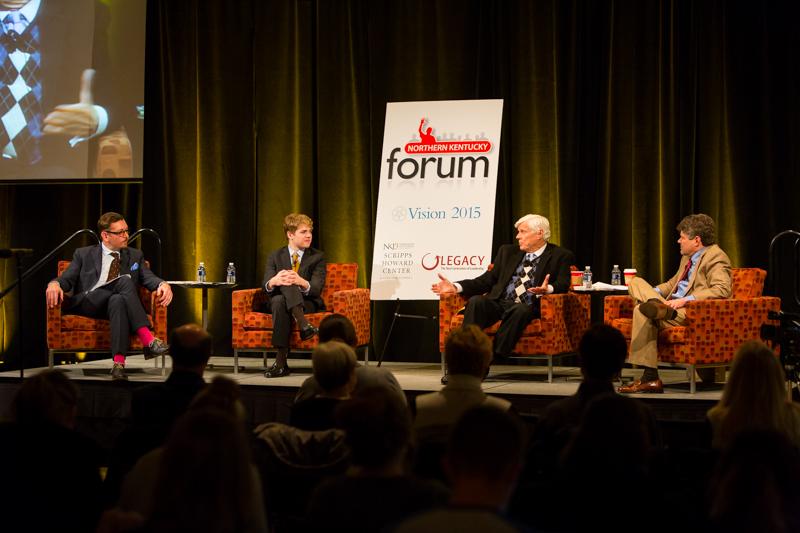 The “Kennedys of Kentucky” stopped by NKU last night to engage with the 60 member audience discussion topics ranging from entrepreneurship to politics.

The family, consisting of three generations of John Y. Browns, gained notoriety across the state for their dedication and service to the community in which they live.

The Northern Kentucky Forum, a nonpartisan, education-oriented effort to bring public affairs dialogue to the region, hosted a panel featuring the Brown family, who have a long standing tradition of public service to the Commonwealth of Kentucky.

It was clear that the three men have a strong pride in their family history.

“There isn’t a single black mark against our name, and I am very proud of that,” Brown Jr. said.

In the 1960s, Brown Jr. helped to turn the small company of Kentucky Fried Chicken into a franchise that would soon sweep the nation.

The moderator of the event, Dr. William Landon, chair of NKU’s Department of History and Geography, added that there’s only three things that Kentucky is known for throughout the world; bourbon, horse racing, and KFC.

After establishing the KFC franchise, Brown Jr., went back to his passion for politics and in 1979 was elected the 55th governor of Kentucky on a promise of running the state like a business. In his tenor in Frankfort, he sought reforms to the tax code, jail system, and other vital areas.

Much like his father and grandfather, John Y. Brown III also found a passion for politics to dedicate his life to. At the age of 32, Brown III was elected as Kentucky secretary of state.

“I wanted my father to be there, but I wanted to be my own man.” Brown III said on his running for secretary of state.

Currently, Brown III manages the government relations practice for the law firm Miller Wells PLLC., and is an adjunct professor at his alma mater, Bellarmine University in Louisville, Ky.

Also spending time at Bellarmine is John Y. Brown IV, who is currently working to earn an undergraduate degree in economics.

Much unlike his family though, John Y. Brown IV is a registered Republican.

“”I have more of a commitment to a certain set of values than I do a political party,” Brown IV said, adding that his family is supportive of his decision to affiliate with the Republican Party.

Brown IV is already following in family footsteps with his own startup company, John Y. Brown Enterprises, based in Louisville, Ky.