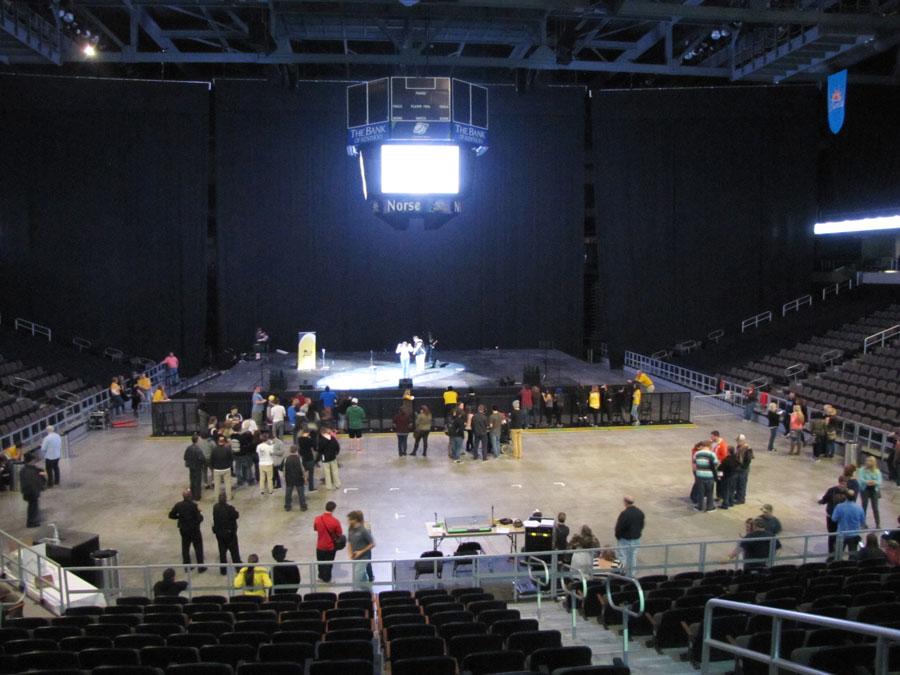 A small crowd waits between sets during 'Norse Rock Rumble'. The Activities Programming Board said that they had space for 500 people to attend the event at the Bank of Kentucky Center.

The band ‘Calm the Tides’ secured their spot for first place Saturday night in the Bank of Kentucky Center at ‘Norse Rock Rumble.’

Hosted by the Activities Programming Board and emceed by comedian Melissa Villasenor, the event was free to anyone who wanted to attend, however, the people in the crowd at the Rumble were few and far between.

There were usually only about 50 audience members in the room at one time, which made it awkward for one band that tried throwing CD’s into the crowd, only to have them clatter to the ground around clusters of people too far away to reach them.

“We were hoping for a lot more in attendance but this is the first time that we were going to do it at the BOKC. So we were just kind of going in with an open mind,” said Leah Kelly, coordinator of student engagement and APB advisor.

Additionally, she said it’s unfortunate because with that space you can tell when less people come than expected.

“We had a lot of talented bands there so we were just happy and appreciative that they were able to show their talents,” Kelly said.

According to Tanner Coleman, APB’s director of entertainment events, only 133 people attended out of a venue space fit to hold 500, despite having created promotional posters, social media advertisements, and the banner that hung in the Student Union.

Coleman explained that once the bands were chosen, it was up the participants to do most of the self-promoting.

Also, according to Kelly, only three of the bands have official social media pages- Season 10, Along the Shore, and Starlit Skies.

The newer bands, Calm the Tides and Rowdy Ruff Gang, promoted on their personal pages.

Kelly also talked about how APB was tasked with doing night and weekend programming and that although they realized that NKU is a commuter campus, they wanted to put on some events that they hoped would draw people to them.

“We were kind of willing to try it this year knowing that it might not be 100 percent attendance but there’s only room to grow for next year,” Kelly added.

“We always want our turnout to be as large as possible and while we didn’t have a huge crowd, I think everyone who attended really enjoyed it.” said Coleman said.

Kelly and Coleman said comedian Melissa Villasenor was mainly there so people would be entertained during band transitions.

However, the emcee’s routine of famous impressions and personal monologues only elicited a few polite chuckles from the sparse audience of APB members, NKU students and the bands’ families.

“I think as far as being a comedian goes it’s very hard for them to gauge without audience participation,” Kelly said.

According to Kelly, Villasenor was very aware who was there but they had told her it was a college campus so she was prepared to entertain college students.

“I think if it had been that type of atmosphere with the audience, engaging with her, it would have been completely different,” Kelly said. “I think most of the audience was just there to watch the bands, they weren’t necessarily aware a comedian was going to be there too.”

For their victory, Calm the Tides members Clay Tyler, Jacob Spence and Jeremiah Hines received a prize of 500 dollars, along with tickets to the Little Big Town concert where they performed as the opening act.

Winning 250 dollars in second place was Season 10, followed by Along the Shore in third place.

Along the Shore lead singer Claire Martin’s family came to the event to see her perform and show their support.

“We love watching her. She’s great,” her mother, Shannon Whitaker said. “Of course, I am a total mom,” she added laughing.

According to Whitaker, her daughter got her start in church music before moving on to Along the Shore, a band she’s been performing with for about 2-3 years.

She said Martin has been singing ever since she was a little girl.

Martin’s father, Matt Whitaker, added that they have performed in local bars and places like the Thompson House but they haven’t performed at events like this involving other competition.