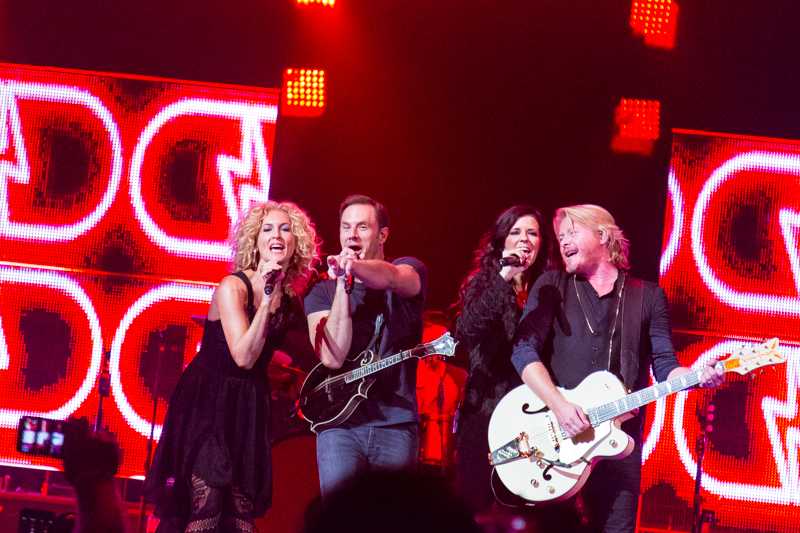 Little Big Town performs at the BOKC. The band performed at the BOKC on Nov. 9, 2014.

There’s an unexplainable energy that fills a room when a concert begins and the performer comes to the stage, the crowd rises to their feet as they wait for a person larger than life to appear.

There’s a static in the air as the chords to a song begin and the crowd roars in the anticipation of finally catching a glimpse of the person they spent their money on to see for an hour, and if they’re lucky maybe a little longer.

As Little Big Town took the stage in The Bank of Kentucky Center on Nov. 9, much of this could be said about the environment that had taken over the arena.

The second stop of their Pain Killer tour, the largest headlining tour the band has ever done, carried a charisma that kept the crowd on their feet the whole time.

Coming off of  a CMA Vocal Group of the Year Award, Little Big Town was one of the first bands to play the BOKC after its opening in 2008, then as the opening act for Carrie Underwood.

The group, battling their way through the pop-country industry of today with songs like “Day Drinking,” still manages to have a soul to their music with tracks like “Girl Crush” and “Your Side of the Bed.”

Constantly moving around the stage, Karen Fairchild, Jimi Westbrook, Phillip Sweet and Kimberly Schlapman gave it their all as they played all 13 songs from their newest album, and also the title of the tour “Pain Killer.”

The band divided up their set by bringing back songs such as “Bring It On Home,” “Take Me Down” and “Boondocks,” a song that helped to launch the group’s career.

Opening the night for Little Big Town were Brothers Osbourne, an up-and-coming country duo currently rocking the charts with their lead single “Rum,” and Brett Eldridge who is riding the success of his first self-titled album featuring his break out single “Beat Of The Music” and was just named CMA’s New Artist of the Year.

Eldridge’s show got the crowd going pulling from his own album but also rocking classics like Frank Sinatra’s “Fly Me To The Moon” and Bob Seger’s “Night Moves” taking on the high notes like an old pro.

From beginning to end all three acts of the evening displayed their enthusiasm for the old and new of country music, laying all of their vocals on the line.

With a dominating presence by Little Big Town, it was a show not to be forgotten anytime soon, leaving you yearning for a day in the deep south or a day off to spend day drinking with one of their albums playing in the background.