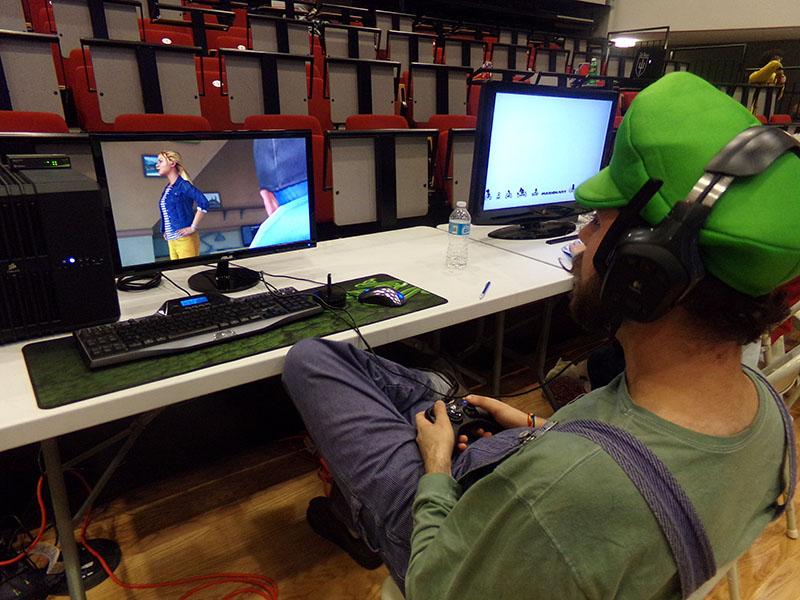 NKU student Steven Middlemas dressed as Luigi plays one of the many games at the MINja's annual charity event.

Groans of defeat, squeals of excitement, and determined battle cries filled the air this Halloween in Griffin Hall’s digitorium. Colorful animations dominated the giant screen while students duked it out on the gaming tournaments. Television sets and laptops dotted the room with various games ranging from PC games to Nintendo to Xbox.

This was none other than the MINjas’ annual gaming charity event.

The money will be used mostly to buy games for children who have life-threatening illnesses to give them something to get through treatments. This event this year raised in total $1445.

According to Carolina Marini, double major new media art and media informatics MINjas’ president, last year’s event was MashCom where students has opportunity to become media workers for places in the Cincinnati and Northern Kentucky area. Former MINjas’ president, Branden Middendorf had a representative from the Aubrey Rose Foundation as a client.

“[Middendorf] edited a few videos for her [Middendorf’s client] and that’s how he got to know them,” Marini said. “And he said, ‘hey, let’s do a charity event this year’.”

Admission was just $1 for NKU students to participate. Throughout the night, raffles were held for a pack of Surge energy drinks, a GameStop gift card to purchase either a PlayStation 4 or Xbox One, and a new 3DS. Money was also raised through a bake sale.

During the event, participants could sit at one of the TV sets and play video games all night for fun. Alongside individual games, gamers could participate in tournaments for games such as the online game League of Legends.

Marini also mentioned the amount of sponsors that the event had this year. Some of the sponsors included Only Use Me Feet, Purrpulsion!, and Mission Nutrition. These are game groups from NKU.

“We also have other awesome sponsors from Remke,” Marini said. “They provided soda and chips.”

Co-founder and NKU alum Jake Reynolds talked about the start of the event.

Reynolds noted that the jump in funds may have been because of the increase of sponsors and the fact that it took place the same night as Relay for Life last year. Relay for Life, an event for raising money for the American Cancer Society, was held in Griffin circle while the annual gaming event took place in Griffin’s digitorium.

“We used to do Child’s Play which is what we have always done,” Marini said. “We did Child’s Play because Spencer our Vice President was diagnosed with lymph nodes cancer… He also went through this program with Child’s Play which is basically this program that brings a game while he is waiting for recovery from the surgery or from chemo. So he was playing games just to keep his mind distracted or off while he was trying to get over the pain of chemo or just waiting.”

The event continues to draw in crowds for many reasons. NKU students and alumni are even coming back to support the event.

Nicole Childers, another NKU alum said that she comes back because of her love of video games and that her friends are always there.

“I like the people, I like the atmosphere,” Childers said. “I’m graduated and I get to see friends.”