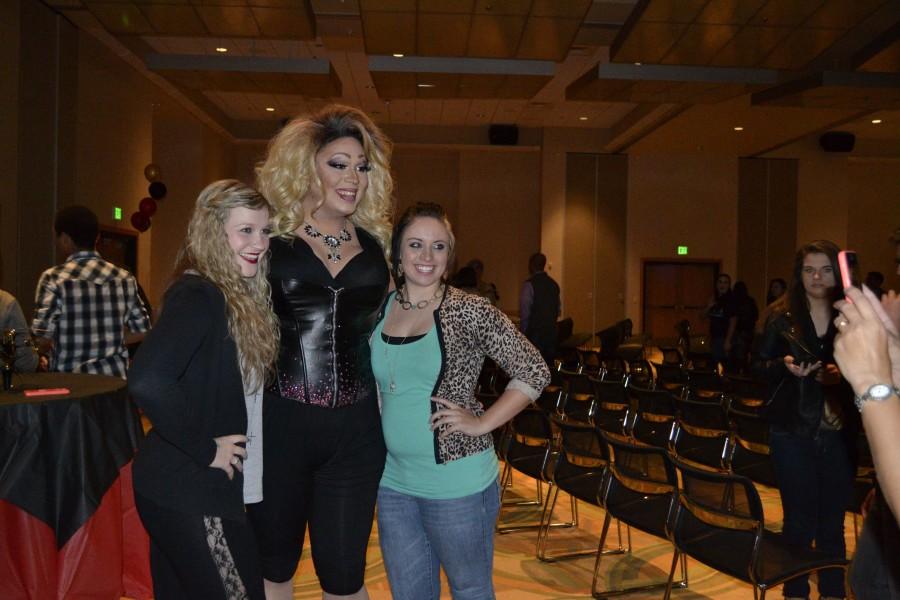 NKU sophomore Kaitlyn Sansome and friend pose with Sarah Jessica Darker, one of the drag queens who performed in the show.

The runway stage protrudes into the audience, its backdrop adorning the rainbow ribbon wrapped triangular emblem of Common Ground. The lights dim and the spotlight takes center stage as people take their seats among the 400 chairs positioned in the Student Union Ballroom.

“This is my first show,” Kaitlyn Sansome said, sophomore theater major. “It was awesome.”

The Common Ground Drag Show, held each semester, helps raise money for a variety of charities.

Crystyle Starr hosted the evening’s show. The event included an array of popular upbeat music, amateur hour, meet and greet with the queens after the show and even selfies with Starr.

“It started as a joke,” Starr said about her initiation as a drag queen.

Seven years later Starr continues her theatrical performances, five of which have been a part of NKU’s drag show. The show wasn’t always the elaborate event it is now. The original event was much smaller and was held in the old lunch room of the University Center.

Last year was the first time the Student Union Ballroom was used to house the event and attendance flourished.

Among the newcomers more than a few had seen drag before, but even they were impressed.

Amateur hour, for many students, is their first opportunity to experience performing in drag. Common Ground’s vice president, Andrew Faul, senior electronic media broadcasting major, did his first performance at last year’s event and decided to come back and give the audience another show.

Faul took the stage during the amateur hour to do his part in raising money for the charitable cause. Strutting onto the runway stage, bull whip in hand, Faul appears under the stage name Tara Newone, and the crowd cheered on his performance.

As the event came to a close, the crowd went to its feet, applauding the performances of every individual who took the stage. Cassie Blair, junior anthropology major, couldn’t agree more, even sharing that the professional part of the show was “kickass.”

A night of entertainment wasn’t the only lasting impression from the night of drag, many saw it as a reflection of NKU’s accepting community.

“It’s very inspiring to see that many people come together,” said Mirelle Jane Divine, another professional drag queen who participated in the event.

The NKU-hosted event is the largest in the tri-state compared to the other local universities who present similar shows.

“Common Ground built this up. I give them all the props in the world,” Starr said.

The event turnout “amazed” and “thrilled” Common Ground President John Begley, a computer information technology major who was not only happy about the money raised by the event but the message he hopes it helps to influence.

“Seeing the turnout at the drag show is encouraging because it shows we are taking a big leap forward in equality,” Begley said.

Begley was not the only to agree that the show impacts NKU. Clark said that it aids the university’s inclusive goals.

Those involved plan to keep pushing for a larger impact and an open-minded outlook, not only to keep raising money but to keep students involved.

“Pushing people out of their comfort zones is what I do,” Vise said. “It’s a good experience… people may be intimidated, but it is a family friendly show, it’s a lot of fun and it is for a good cause.”

Common Ground plans to host another drag show on April 10, 2015.