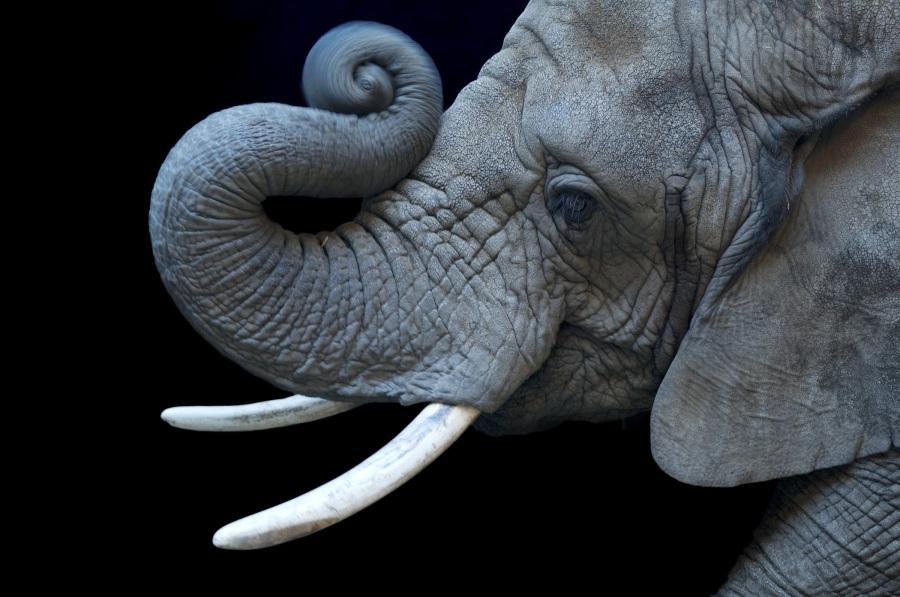 The African Elephant is one of the species documented in Joel Sartore's Photo Ark that is on display in one of NKU's FotoFocus galleries.

“50 percent of all species by 2100 will be headed towards extinction,” said National Geographic photographer of 22 years, Joel Sartore. Thus sparked the motivation behind the Photo Ark, a collection of over 3,700 photographed species captured over nine years and the number continues to grow.

Thursday night, NKU welcomed Joel Sartore’s high-profiled work and the unique opportunity to hear him speak on the topic. A few of Sartore’s images from his Photo Ark collection are displayed in the smaller gallery inside the Fine Arts building.

“We have never done something at this level before,” said David Knight, gallery director for the Fine Arts department. The University is one of over fifty venues to host a FotoFocus gallery, but NKU stands as one of the few to showcase two galleries.

Knight was a crucial part in organizing the event, alongside many other people. Their efforts made it possible for the public, NKU students and their families to have the opportunity to learn more about the alarming facts about the downfall of hundreds of species across the globe.

Matthew Albritton, assistant professor of photography, addressed the hard work of Barbara Houghton’s persistence to bring the special event to campus, without whom the event would not have been a success.

“Not in stature but in passion and fierceness like a quarterback, for that we thank you,” said Albritton.

Houghton, a professor of art specializing in photography, remained enthusiastic about the scope of the event throughout the year-and-a-half process in preparation for the FotoFocus event.

“The driving force was that everyone was constantly looking for ways to enrich the student experience,” said Michael E. Keating, a trustee of the Clyde N. Day Foundation, one of the sponsors for the FotoFocus event at NKU.

The event’s broad appeal expanded beyond the Fine Arts department.

Several hundred people filled the seats for the opportunity to learn more about Sartore’s mission and get a glimpse at his photographs.

“The intention was to get a lot of people involved. We wanted people to come to the gallery, to come into the (Fine Arts) building. The project has led to other ideas for other departments,” Knight said.

Sartore’s work and the FotoFocus event connected two NKU students, Emily Keener and Kathryn Keefe, in preparation for the occasion.

“Barbara reached out to me quite awhile ago,” Kirsten Schwarz,assistant biology professor, said. “She wanted to bridge the story to other disciplines.”

From there, Schwarz worked with the students who showed interest in the project.

Keener and Keefe spent the past summer researching deeper into connecting science communication and the National Geographic photographers’ work. The students were given a direction then set loose to dig deeper and deeper into their research.

“I felt pressure to make the research interesting, but I figured out that you don’t have to dress up something that is already interesting,” Keener, a junior environmental science major, said.

Keener and Keefe were not the only students to have an important role in the assembly of the unique conjuncture at NKU.

John David Richardson and Emily Wiethorn, both senior bachelor of fine arts in applied photography, served as FotoFocus student ambassadors and promoted the lecture through the student body.

The crowds enthusiasm for the event was palpable, with lines out the door of the gallery to meet Sartore and shocked conversations about the exponentially increasing risk of wildlife extinction.

“I believe with all my heart the world needs to be looked at,” said Michael Nichols, fellow National Geographic photographer who also held a lecture the night before Sartore’s and has a gallery in the fine arts building.

Sartore’s photographs provide that view–they allow people from all the around the globe to look at the many species the world has to offer.

“It serves as a memory to see what the world has in it,” Sartore said. “It’s not too late to save these species.”

Satore’s passion to save these species bleeds through the details of his photographs and his persistent work ethic. The pictures are set up with studio lighting on white or black background paper or cloth. Satore chose this method of photography to give each animal, regardless of size, equal impact.

“A mouse is no more or no less important than a squid,” Satore said.

A member of Defenders of Wildlife National Board, Sartore’s devotion to his work and conservation is revamped with each animal he has the opportunity to photograph.

“It is always the next one because they deserve my attention,” Sartore said when asked of his favorite animal to capture photos of. “It’s an honor to tell these animals’ stories.”

Throughout the lecture, Sartore shared information about the life threatening plight species across the world are facing and ways to shift the tide for conservation of the world’s wildlife.

“Between one generation, you will see 40 percent less than what I’ve seen in my lifetime,” Sartore said. “I hope people realize when these species go, so do we. Saving species is saving ourselves.”

Sartore plans to continue the Photo Ark project for the rest of his life, even joking with the audience that his son has offered to finish his father’s work if Sartore were to have an “untimely demise”.

After the lecture, audience members gathered on the third floor of the Fine Arts building to eat cake, pumpkin bars, chips and dip.  Students and the public were free to explore both Sartore’s and Nichols’s galleries, which will remain open to the public until October 24, 2014. Within the gallery, Sartore had book and poster signings.