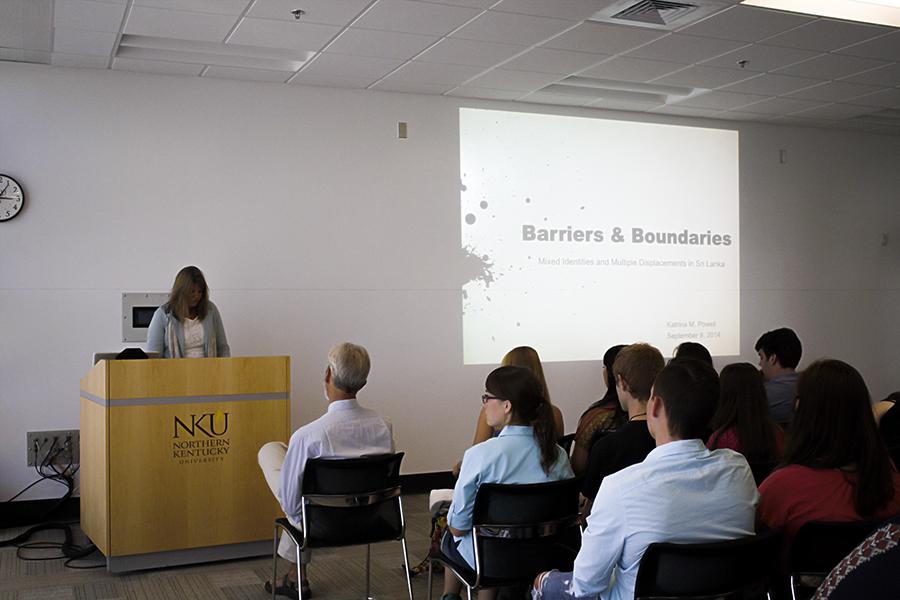 Dr. Katrina Powell hosted a lecture in the Student Union Tuesday, Sept. 9, on the topic of displacement among Sri Lankan citizens.

Dr. Powell traveled to Sri Lanka in the summer of 2011 “with hopes of meeting a few well-known artists and writers within the community.” After arriving Powell said she realized the “Sri Lankan citizens’ displacement was very similar to the displacement of the white citizens of Appalachia.”

Dr. Powell is the associate professor of English and director of women’s and gender studies at Virginia Tech.

While in Sri Lanka, Powell met one of the country’s most famous authors, Jean Arasanayagam. Arasanayagam has published 20 books and has won three Sri Lankan national awards. She is also featured in the documentary Tropical Amsterdam. The movie tells the story of a Dutch tribe who is struggling to deal with colonialism and destruction. In the movie, Powell stated, “she [Arasanayagam] explores the issue of identity through refugeedom.”

One thing Powell said she learned from Arasanayagam was the bravery in publishing her books.

“She writes without fear,” Powell said.

Powell said parts of the Sri Lankan community can be a very dangerous place, but Arasanayagam excels, as is proven in all 20 of her published works. But it is not the fame that drives Arasanayagam to continue writing about Sri Lankan displacement.

“For her, it is about documenting humanity,” Powell said.

The study abroad department of NKU is offering students in the upcoming year with the chance to visit Sri Lanka. Tom McGovern, the chair of the Visual Arts department, and Sharyn Jones, associate director of anthropology, have worked to set up the study abroad trip for May of 2015.

As all study abroad programs do, McGovern stated, this trip, “provides a cultural and educational experience.”

McGovern said that the trip will be interesting because the students will be able to explore the Sri Lanken culture with the opportunity for service learning.

“They will have the chance to spend roughly three days experiencing the Asian village life. It allows them to see that there’s a very large world out there that’s highly worth exploring,” he said.

Having been to the country in the 1970’s, McGovern reported that about 70 percent of the country follows the Buddhist religion, so the students will visit the Buddhist Monastery and the Metropolis of Colombo.

“Sri Lanka is a very beautiful country. It’s an amazing jewel of an environment,” McGovern said.

McGovern hopes that the staff attending this trip will be able to provide students with a quality experience where they can get a feel for indigenous culture.

“Overall, it’s a matter of trying to get students to experience what they haven’t been able to see, smell, or taste in their life before,” McGovern said.