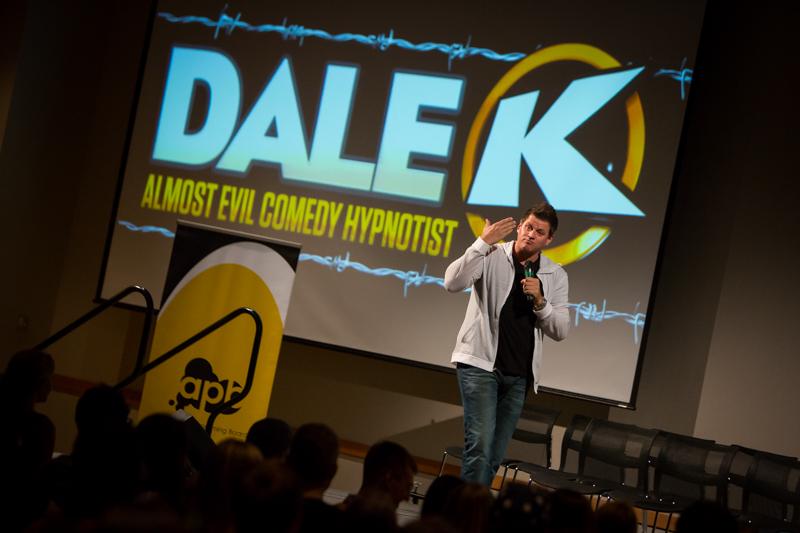 NKU students were hypnotized on Aug. 19 and shared in the spirit of NKU in the most popular event of Victor Fest 2014, the hypnotist Dale K.

“Every year, Dale K is the biggest event of Victor Fest,”  Anna DiFrank, director of Membership for the Activities Programming Board said.“It’s a great way to get the incoming freshmen and student body to connect.”

Ron Brown, freshman environmental science major, who attended the event agreed it was a great way to start the year.

“It helps to get people excited about the upcoming year,” Brown said. “Hypnosis helps to change an individual’s mind set.”

A packed house in the student union ballroom were entertained by Dale K, a world renowned hypnotist.

“About eight years ago the activities board contacted me directly,” Dale K said. “My goal is to entertain my audience and motivate the minds of the people who volunteer.”

The Student Union Ballroom was filled with energy as students shouted and jumped at the start of the show for a chance to be chosen as one of Dale K’s subjects for the evening show.

“To be successfully hypnotized, students need to think outside the box and get comfortable with the uncomfortable,” Dale K said. “I believe people perceive hypnosis as mind control, when that isn’t the point. I’m pushing confidence which lies within the individual.”

“Hypnotism stops the filter of being scared. It brings out confidence and your true self,”  Hellkamp said.

The number of students asked to volunteer varied from 10 to 15 students at each of the hour and a half performances.

“I ask my participants to trust me. It really feels good to let yourself get that caught up in your imagination,” Dale K said. “I’m not controlling their minds; I’m helping to guide their imagination.”

Though he isn’t a mind controller, he does work to expand the minds of participants and push instead of pull.

“I’m not pulling so much as pushing confidence and imagination,” Dale K said.

Dale K brilliantly executed the advantages of supportive guidance. Dale K helps his participants to create and believe whatever their mind may conjure.

“I open the door and encourage,” said Dale K. “It is up to the individual to focus and expand their mind.”

Continue checking out The Northerner for continuing coverage of Victor Fest all week long.