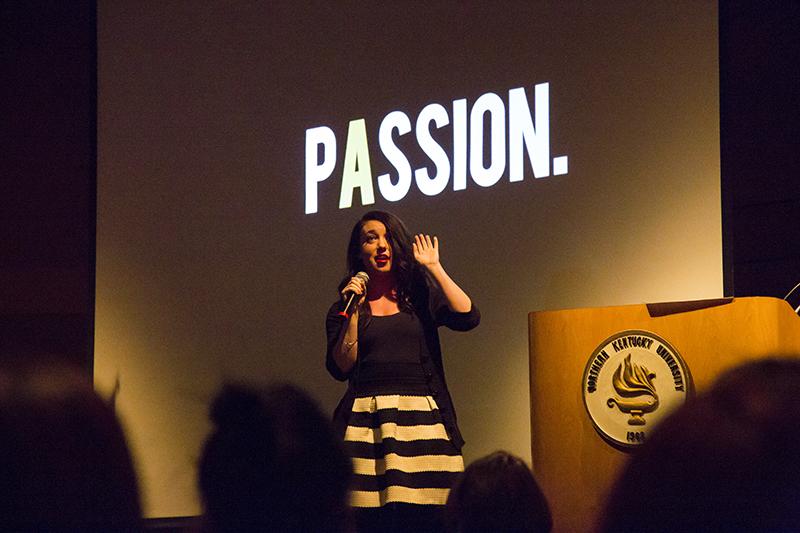 Hannah Brencher on the stage giving her speech Tuesday night.

The simple act of reaching out to others for the sake of a better world is something many people strive to do. Some make a career out of helping others, whether through social work, medicine or activism. Some, however—like Hannah Brencher—become inspirations to others almost accidentally, and begin making changes they never expected.

In an event Tuesday evening hosted by the NKU Activities Programming Board, Hannah Brencher shared her story with an audience of NKU students.

In addition to the Wall Street Journal, Brencher has been mentioned in Oprah, Glamour, Men’s Health Magazine, the Chicago Tribune, and international publications like the UK’s Guardian, Brazil’s Mulher, and Chile’s El Mercurio. Now the founder of The World Needs More Love Letters, a worldwide love letter writing and empowerment organization, Brencher has been a TED talk speaker, is in the process of publishing a memoir, and blogs at hannahbrencher.com.

Conveying a humorous and heartfelt message of love, self-determination, and the familiar search for the meaning in life, Brencher spoke on her journey to self-actualization and fame in popular media.

“I have never been nervous to share a story,” Brencher said. “My friends always say I’m the one most likely to get into the white van offering free candy because I think there’s a story in that.”

Brencher’s legacy of storytelling and connection in a social media-saturated age began in 2010 following her college graduation. Living in New York for a year of volunteer service, Brencher took up residence on the third floor of an immigration center attached to a church, living on a stipend of $25 per week.

“People were always stopping to talk to you,” Brencher said of her Bronx neighborhood. “They were always willing to put down whatever they were doing just to see how you were doing.”

In spite of the connections she made while a New York resident, Brencher succumbed to the loneliness and uncertainty of post-graduate life in an unfamiliar city and sank into a depression—a word, she said, she was reluctant to use at the time of its onset.

“I felt like it had such a stigma at the time,” Brencher said.

Brencher described an epiphany and lifting of her depression after writing a letter expressing sympathy and understanding to a lonely woman on a subway. The act of writing the letter, though it never reached the woman herself, changed the course of Brencher’s life. She continued writing inspiring letters and leaving them in places around New York City.

“I kept writing these letters until I filled an entire notebook,” Brencher said. “I started to rip them out of the notebook. I would write on the front of the letters, ‘if you find this letter, it’s for you’.”

After leaving many letters anonymously, Brencher published a post on her personal blog regarding her project, with an addendum offering handwritten letters for anyone who requested one. Overnight, her post went viral, and Brencher’s email inbox filled with hundreds of heartfelt personal stories and requests for letters from all over the world.

“Our generation has a hard time connecting with one another. We have a hard time paying attention to one another,” Brencher said. “I got messages from hundreds of people asking me for a reason to wait by the mailbox.”

Determined, Brencher set out to send 400 letters to those who had requested them, chronicling the act on her blog. By the time she had written 397 letters, she was contacted by a Wall Street Journal reporter who had interviewed a recipient of one of Brencher’s handwritten letters. Brencher was featured in the newspaper—and her simple act of reaching out evolved into a social movement.

NKU freshman accounting and finance major Brigitte Waldrop attended Brencher’s talk with little prior knowledge of her work. The experience, she said, was “beautiful”.

“It seemed really interesting when I saw posters around campus,” Waldrop said, who attended the event on a whim after getting out of work early. “It was very tear-provoking. I heard of her on the news, but this is the first time I’ve actually heard her speak. It makes you realize that life is short, and it makes you feel better to think about others than yourself.”

Waldrop plans to read her memoir “If You Find This Letter”, to be published in the winter of 2015.

Brencher’s journey, though she described it as emerging from the most difficult point of her life, has reached people in more places than she ever dreamed. With mentions and features in publications around the globe, her aim to connect with others has not only succeeded, but served a purpose.

“I want to circle back to a moment,” Brencher said of her lifelong goal. “Maybe you’ve had it before, when suddenly you look up and ask yourself, ‘What am I doing here, and why am I here?’ We can become so content to just survive in the world that we forget that we’re actually called to change the world.”