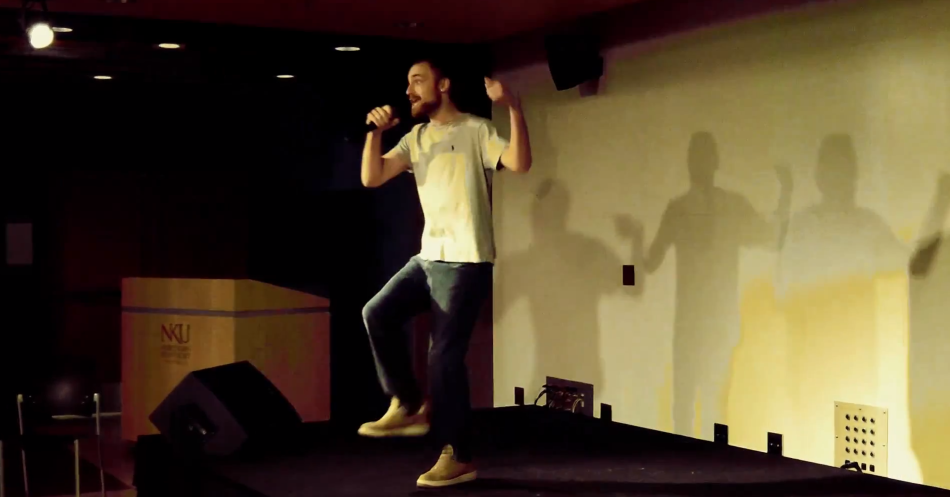 2 Chainz is set to take over the Bank of Kentucky Center Sunday night and two NKU students battled it out on Wednesday afternoon for a chance to see him in action.

The Office of Marketing and Communications created the event to promote the upcoming concert.

“We work with BOK  and when we hear about a concert that students might be interested we try to think about what we can do to promote the event,” said Ryan Clark, web editor and specialist for marketing and communications.

The two students who showed up to compete were Brannon Foster and Garth Whitaker, a senior theatre major.

The winner was decided after three rounds of freestyle rapping.

It was decided that there would be three rounds “because nothing happens in rounds of four,” according to host Jeff Iker, Student Orientation and Parent Programs coordinator.

The battle started off with a coin toss to see who would go first, which Whitaker won and deferred to Foster.

With the first round under way each contestant was permitted two minutes to show their skills.

Foster showed his skills by rapping at a fast pace and beat boxing when handed the microphone for the first time.

Whitaker walked on stage and apologized for the “brains he’s about to melt.”

After mild deliberation, it was decided that Whitaker had taken the first round.

In the second round,  each contestant freestyled for one minute.

With lyrics such as, “When I spit when I get you can’t stop me cause I am on top of this mountain on top,” the round was quickly given to Foster.

For the third and final round Foster and Whitaker had 30 seconds to prove their skills for one last chance at the tickets.

In the end, it was Whitaker whose skills prevailed.

According to Ramstetter, “Garth just seemed more polished and he flowed really well.”

When asked how he prepared for the battle, Whitaker said there is no way to prepare for something like this because he likes to draw from the audience, not just reciting something that he has written beforehand.

“I’ve been rapping since I was 14. I love Rhythmic American Poetry,” Whitaker said. “I’ve been doing it for so long, I don’t think about it. It’s second nature.”

While both Foster and Whitaker showed major talent Wed. afternoon, it will be Whitaker rocking in the crowd Sun. night with 2 Chainz and Pusha T.