The Do’s and Don’ts of Relationships: Advice from the Dating Doctor 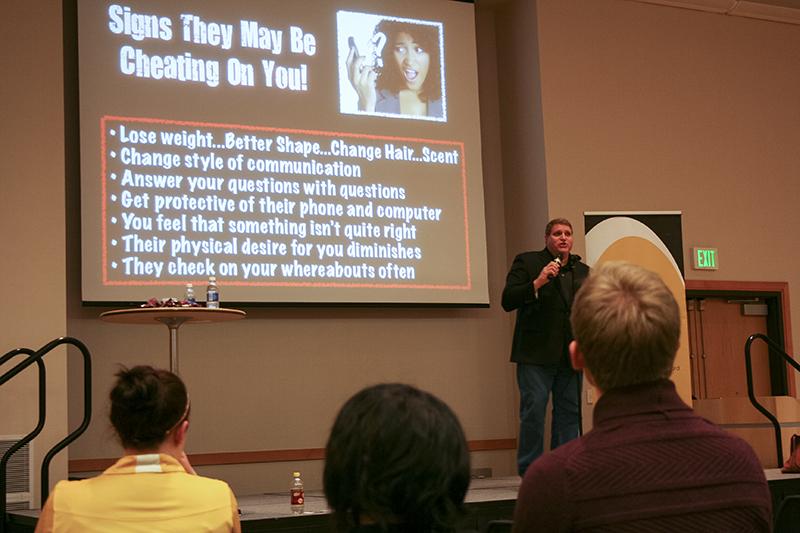 David Coleman, Campus Activities Magazine’s 13-Time Speaker of the Year, spoke to the NKU community about love and how to make smart choices when dating.

Students filed in the Student Union Ballroom Wednesday night eager to hear David Coleman, Campus Activities Magazine’s 13-Time Speaker of the Year, talk about love and how to make smart choices when dating.

His talk utilized humor to tackle subjects such as romance, break-ups, sexuality, cheating, and friend zones.

Coleman began by telling the audience that one of the most important steps to making great connections with people is this: stop looking for someone to complete you.

Do: Look for someone who complements you.

He talked about the ABC’s of Initial Interest which are: attraction, believability, chemistry, and desire.

While attraction is important, if someone does not believe you are a genuine person, they will not pursue you.

Chemistry is just as integral because it shows you how well you and the other person balance each other.

Also, “Desire does not necessarily mean physical desire,” he said. “It mainly refers to the desire to see someone again or to be in their presence.”

He also employed motivational exercises to encourage students to participate.

“Tomorrow you’re going to wake up, shower, get ready and when you look at yourself in the mirror, I want you to say, ‘I would so date me.’ Practice,” he said and asked audience members to repeat that phrase.

Coleman said you need to be confident in yourself in order to build a strong bond with someone.

“If you think they are out of your league, then they are,” he said. “If you’re not your own greatest walking ambassador, if you wouldn’t choose to date you, how can you expect anyone else to want to date you?”

Coleman also covered other topics such as the importance of consent and sending the right message. He said communication is another key to a healthy relationship and you must ask permission before you cross boundaries.

“Consent is everything and vitally important,” Coleman said.

If you do not know what you are to someone mentally, physically, spiritually, or emotionally, he said, either talk about it or stay out of their room.

He also discussed the importance of using discretion when you send text messages and other social media venues to convey sexual interest.

Once you send something out there, it cannot be undone. “You just can’t get that back,” Coleman said.

He advised the audience members to stop and think before they send something they might regret later.

Do: Understand and embrace the different types of love.

Coleman defined the three categories of love as eros, agape, and philia.

Eros is “physical attraction and chemistry,” agape is a “heartfelt love that grows stronger over time,” and philia is “enjoying time as friends.”

He said you cannot have one without the other.

“It’s the combination of all three that makes relationships last,” Coleman said.

The audience seemed to react well to the Dating Doctor, as the room frequently erupted into bouts of laughter at his well-timed quips, and many students even stayed after to ask Coleman questions.

Several students felt the talk was worth going to and very helpful.

Junior Lindsay Mumley, a criminal justice major, said, the event was funny and that Coleman brought up some good points.

“I thought it was really different. I liked the advice that he gave and I think he did a really good job,” said sophomore Tyler Mowery, a public relations major.

For more dating tips or relationship advice, go to www.DatingDoctor.com, www.ColemanProductions.com, or call 1-866-328-3762 for Brooke A. Sines, Coleman’s agent and manager.