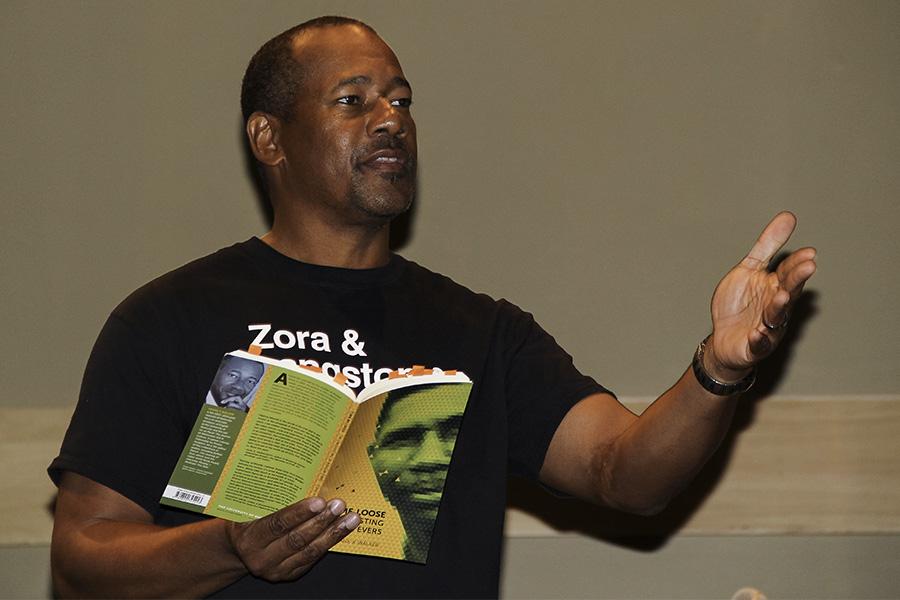 Kentucky Poet Laureate Frank X. Walker performed an excerpt from his poem “Sorority Meeting” from his sixth collection of poetry, “Turn Me Loose: The Unghosting of Medgar Evers” to a crowd of NKU students and staff in the University Center’s Otto Budig Center Nov. 6.

Walker said it is constructed as dialogue and begins in the voice of a racist in a dark, hatred-filled place.

Walker did warn his collection begins dark, but if the reader can get through the dark beginning, they will enjoy the rest which becomes lighter.

“Poetry is intimacy while maintaining tradition,” said Walker about his poetic style.

“I thoroughly enjoyed Walker’s performance and I have read several of his collections of poetry. His words give me chills. I think his poetry has a pulse that speaks to many emotions,” said Britney Davis, junior English major.

“I read ‘Black Box: Poems’ halfway through and had to stop because his poems are so intense,” said senior English major Chris Murray. “I would recommend his poetry be read by every student no matter what their race is. Everyone can get something out of his poems.”

Walker is from Danville, Ky., and is a graduate of the University of Kentucky. He completed a Master’s of Fine Arts in writing at Spalding University in Louisville in May 2003.

Walker taught English classes at NKU from 2007 to 2009. He has traveled all over the United States, Cuba and Ireland, leading writing workshops and reading his poetry.

Walker has a strong bond with the Appalachian and African-American communities. He even made up a phrase to combine the two: Affrilachia. The term can now be found in the Oxford English Dictionary.

He is a founding member of the Affrilachian Poets and he is the editor and publisher of “PLUCK! – The new Journal of Affrilachian Art & Culture.”

In a time span of 14 years, Walker has managed to publish six collections of poetry. His first collection of poems, “Affrilachia” was published in 2000. His next books were “Buffalo Dance: the Journey of York” in 2004, “Black Box: Poems” in 2005, “America: What’s My Name? The “Other” Poets Unfurl the Flag” in 2007, “When Winter Come: the Assentation of York” in 2008, “Isaac Murphy: I dedicate this Ride” and his current edition, “Turn Me Loose: The Unghosting of Medgar Evers.”

A Kentucky Arts Council Al Smith Fellowship recipient, Walker’s poems have been converted into a stage production by the University of Kentucky Theatre department and widely anthologized in numerous collections, including “The Appalachian Journal,” “Limestone,” “Roundtable,” “My Brother’s Keeper,” “Spirit and Flame: An Anthology of Contemporary African American Poetry” and “Role Call: A Generational Anthology of Social and Political Black Literature and Art.”

He is a former contributing writer and columnist for Ace Weekly and the first Kentucky writer to be featured on NPR’s “This I Believe.”