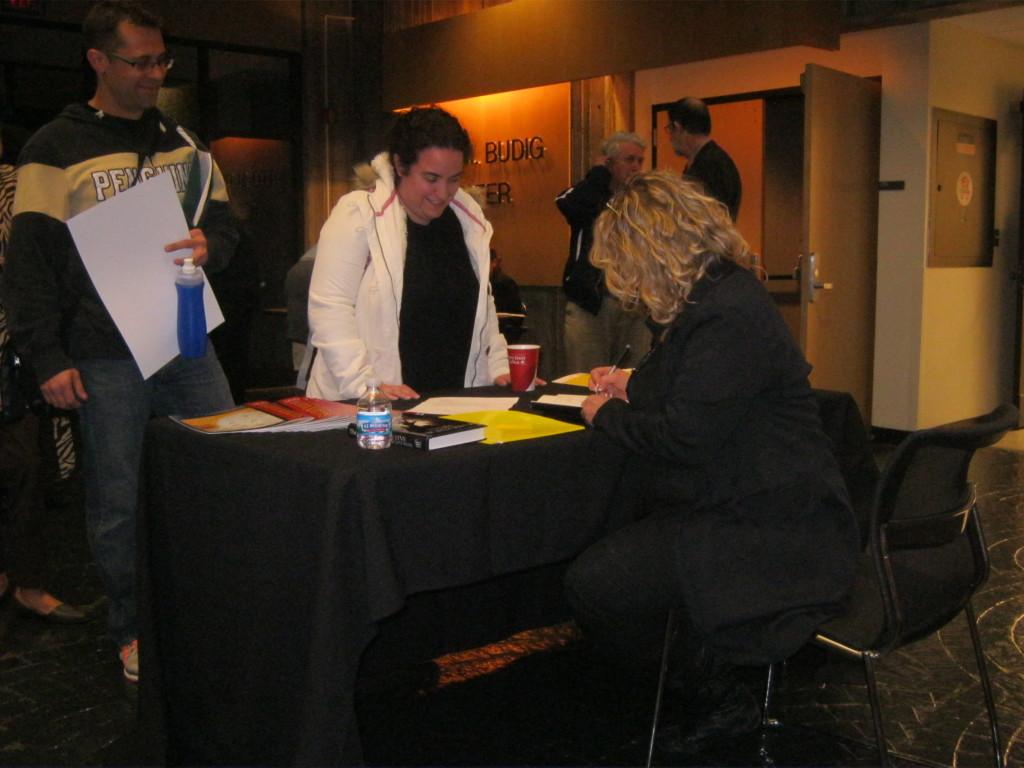 Author Lynn Hightower signs copies of her latest book at Northern Kentucky University. Hightower gave a reading of her latest novel and told the story of studying under a famous Kentucky poet to an audience on in the Otto Budig Theater on Oct. 23.

University of Kentucky Journalism major gone successful author, Lynn Hightower, came to NKU on Oct. 23 for a book signing of her newest novel, The Piper .

Her introduction to The Piper began with a chilling read of its first chapter.

“They call us, you know, the dead do. The ones we’ve loved, the ones who’ve passed. Someone you know has received a call—maybe it was you. They call to tell us they love us, to tell us they’re okay. And sometimes they call to warn…”

Hightower said she has lived in many old houses and that many of them were haunted. She said I lived in them, “but not on purpose.”

She recalled living in a cottage where the lights would flicker on and off in the middle of the night, and she recounted hearing the water come on at full blast at four in the morning right as she worked on her novels.

However, she said she had never been a firm believer in relatives coming back from the dead and making phone calls until she talked to a friend who said she had received a phone call from one of her dead loved ones on her birthday every year.

Hightower’s second inspiration for writing horror fiction came with the news story, “Phone Calls from the Dead,” and she said this story revolves around this well-known phenomenon from the literal headline.

In California, a commuter train crashed due to the conductor interacting with his phone. One of the victims had family that tried to call in the span of three hours. His three kids, ex-wife, fiance, and mother and father each tried to call.

Eventually, the family reached contact with the rescue workers who told the family that he had died upon impact. His cell phone had also been destroyed. But the family still received a phone call after they had discovered the tragedy.

The message said, “I love you, I’m okay,” according to Hightower’s retelling.

The first chapter of Hightower’s book features a character that comes back from the dead like in famous ghost stories, such as the train crash. Olivia is a character who has lost siblings and children, but her brother Chris, in particular, warns Olivia that “the Piper” is coming.

Hightower described the Piper as a demon who lived 300,000,000 years, has yellow eyes, and has many names but holds each of his names dear. Olivia does not discover who the Piper is until later in the book.

Hightower then turned the topic of her presentation to how she ventured into the profession of writing, to begin with.

“The seeds of how I teach come from Wendell Berry,” she said in regards to her imaginative writing professor at the University of Kentucky.

Hightower graduated from high school at 16 by cutting back on math and study hall and as a teenager starting college, where she had her first encounter with Wendell Berry.

“He was a very tall man and a very funny man. I’m five-foot tall,” she said, also describing Berry as “very tough.” She walked into his office wanting to take Berry’s imaginative writing class not knowing his renown.

“So you’re Wendell Berry? I want to take your Imaginative Writing class.”

Berry clarified, “My writing class is very challenging. You already have four challenging classes on your schedule. You might want to wait and take Imaginative Writing next semester.”

16-year-old Hightower stood up and said, “Writing is what I do.”

Berry then signed her permission form and Hightower left. She checked out his book from the library and thought afterward, “He is a brilliant writer. I wish I hadn’t made a fool of myself.”

She also said he is “kind, a good mentor, and a scary alpha male,” and the main lesson he taught her and the first lesson she said she learned from him was to “write specifically.”

Hightower said she expected creative writing courses to be how she experienced them in high school with “burning candles and playing music.”

Berry put people aside before midterms, according to Hightower, and told them whether or not they were going to fail, but the second lesson she learned from him was “stop being lazy and work harder.”

“Ya know, Lynn, I know what you’re doing. You’re sliding by making the least amount of effort,” Berry told Hightower, who called that her “best and most humiliating advice.”

Hightower had advice of her own to tell the audience during the question and answer session, after her reading.

For first time authors and any author, Hightower said getting an agent is a must. Getting an agent allows the quickest response time between editors, writers and publications.

She said it’s also important to become a writer because “writer’s die everyday.” Agents and publications look for the next best thing.

Jared Compton, senior majoring in electronic and media broadcasting, asked about the challenges writing for a new genre and about writer’s block.

Hightower said, “Writer’s block does not exist…tomorrow I will be brilliant, today I write seven pages of crap.”

Students seemed inspired by the entirety of the event.

Compton said “it makes me want to read something other than what’s required for class,” in response to the end-of-the-reading lecture.