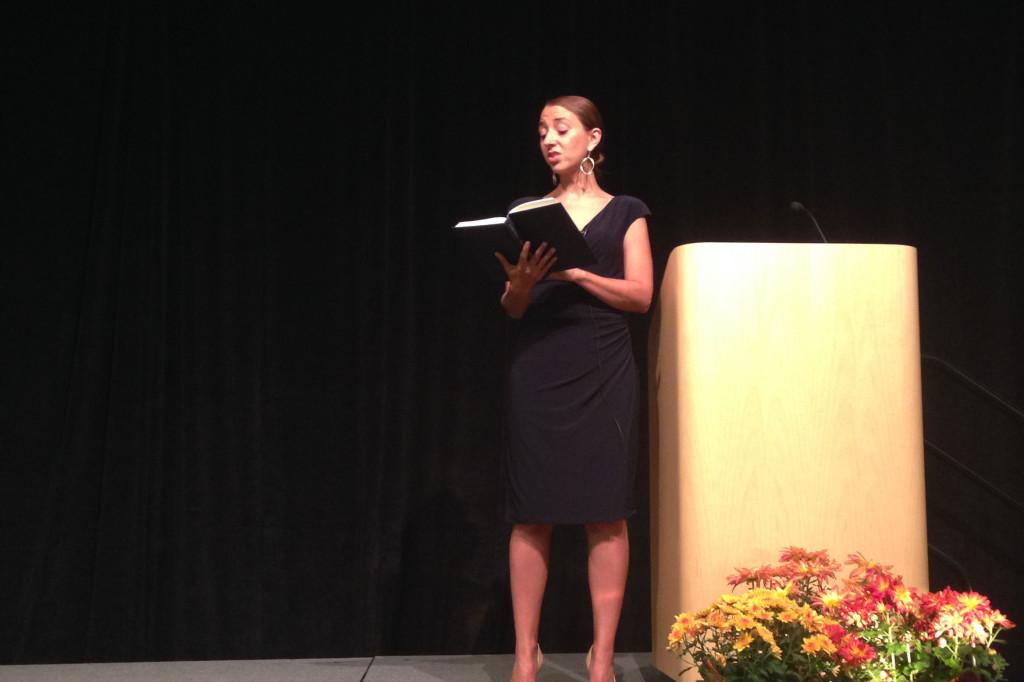 Imagine dropping out of school at age 13. Imagine being swept into a world of nude modeling, prostitution, and shoplifting. Then imagine surviving the experience and becoming one of the most prominent worldwide advocates for human trafficking.

Lloyd gave a glimpse of her life and work as a leading human trafficking abolitionist as part of the College of Education and Human Services Distinguished Scholar Series. The presentation was given to a room of over 600 people. Lloyd explained that sex trafficking is not just an isolated crime in certain areas.

Lloyd said that a common misconception is that the “real” victims of human trafficking are coming into the United States from other countries. She explained that the victims are being forced into sex trafficking right in surrounding communities.

The Ohio Human Trafficking Task Force estimates that there are 1,078 children who are victims of human trafficking in the state of Ohio every year.

Ohio passed the Safe Harbor Law in June 2012. The law protects victims of human trafficking as well as increased punishment for traffickers, making it a first-degree felony, according to the Ohio Attorney General’s annual human trafficking report in 2012.

Breaking psychological bonds that the victims face was a problem that Lloyd outlined to the audience. She explained that psychological ties are harder to break compared to physical ties.

“You don’t have to be chained to a wall to feel trapped,” Lloyd said.

“If I was having a speech on domestic violence, not as many people would be here,” Lloyd said.

With only $30 and a laptop, Rachel Lloyd established Girls Education and Mentoring Services in order to help victims of human trafficking. Lloyd serves as the director of the program that recently celebrated its 15th anniversary.

Lloyd talked about helping victims that were born in 1998, the same year she established Girls Education and Mentoring Services. While her organization has come a long way, the problem has not been fully resolved. Lloyd said that when Girls Education and Mentoring Services is out of business and no longer needed, the issue of human trafficking is solved.

Lloyd worked with legislators in New York to pass the Safe Harbor for Exploited Youth Act in 2008. The law helps protect young trafficking victims who were being criminalized. Lloyd said that if a 40 year old man gave a young girl money, it was no longer seen as statutory rape and the young girl was prosecuted. This law changed that and provided the victims with social services.

In 2011, Lloyd published her memoir, “Girls Like Us: Fighting for a World Where Girls Are Not for Sale.” Lloyd read an excerpt from her memoir to the audience that detailed a visit to Riker’s Island Correctional Facility in New York. Lloyd told the story of a victim whose pimp burned down the house of  her grandmother after she tried to get out of the sex trade.

“Very Young Girls” is a Showtime documentary that Rachel Lloyd served as co-executive producer for that was released in 2007. The film exposes the sex trafficking of New York City.

Gabby Maxedon, coordinator of counseling, social work, and leadership, was instrumental in getting Lloyd to come to campus. Maxedon said watching Rachel Lloyd’s documentary while receiving an undergraduate degree at the University of Louisville inspired her to do her part in fighting human trafficking.

Maxedon said she investigated brothels in the area and filmed footage of sex trafficking victims who were passed out under the influence of drugs that she turned over to the task force.

When she took a job at NKU a year ago, she began working on getting Rachel Lloyd to come to campus to tell her story.

“We are very lucky the college does something like this,” Maxedon said.

Audience member Caliesha Comley, a student at Georgetown College, was inspired by Rachel Lloyd’s speech and enjoyed her take on how the discourse of human trafficking is becoming more public.

The next Distinguished Scholar Series presentation is scheduled for March 20, 2014. The speaker of the event will be Dr. Russell R. Pate, a professor from the University of South Carolina’s Department of Exercise Science. Pate will be giving a presentation on promoting physical activity and preventing obesity in children.