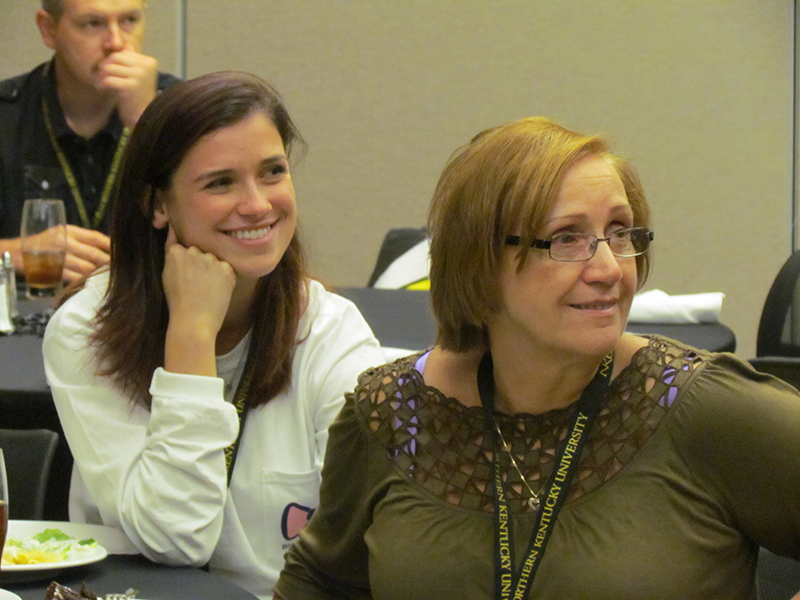 “My mother isn’t someone just to look up to; she is someone to try to be,” said junior communications major Arnela Zekic in her nomination letter about her mother, Amira, who won the 2013 Parent of the Year Award during NKU’s Family Weekend.

President Geoffrey Mearns and his wife Jennifer presented the award to a stunned Amira and her proud daughter, as a room full of fellow students and parents applauded.

“I’m so happy,” Amira said of the event, “so proud. I could not believe this is happening.”

Amira moved from Bosnia to America when she was 46 and her daughter shared in her nomination letter, read by President Mearns, “All she wanted for me was to get an education and have a successful life here.”

As President Mearns read the nomination letter, Arnela excitedly started tapping her mother on the shoulder. “That’s my letter,” she said to her mother who didn’t understand what that meant at first.

Arnela started pointing and hopping up and down with excitement because her mother won and when her mother finally understood, they both sat and listened to the beautiful words from a daughter to her mother.

“I do not just consider my mother as my parent. She is my best friend, my hero and the bravest woman I know,” Arnela said. “My mother is the reason I am who I am today.”

Britta Gibson, associate director of New Student Orientation and Parent Programs said that they reached out to students before the event through email and advertisements, and encouraged students to nominate their parents.

“Parent, we use that term loosely. It could be a grandparent, a guardian, whoever fills that role,” Gibson said.

After submitted, the nominations were read by a committee and a winner was selected to be honored at the dinner.

“It’s always so hard,” Gibson said because all the letters are so compelling but, “one normally really grabs you.”

“When President Mearns announces the winner, he’ll probably read some snippets about the parent and you’ll understand then why this particular person rose to the top,” Gibson said.

Amira will be featured in the November parent newsletter and received free registration for Family Weekend for this year as well as next year, according to Gibson.

Gibson said one of the requirements for a parent to win the award is that they must be registered for the family weekend and be present at the dinner because that is a good indicator they are involved in their student’s lives.

Dr. Ryan Padgett, assistant vice president of Student Success and Assessment, welcomed parents and guardians to the dinner and encouraged them to take the opportunity to talk to their student and learn about their life, classes, new friends and organizations.

“Support your students continued success, but most of all, reconnect,” Padgett said. “Your involvement and support with your student is vital in their success.”

Dr. Peter Gitau, vice president of Student Affairs, took a few moments to speak to the students and their parents about the important influence parents have in their children’s lives.

Gitau said according to a survey from first year NKU students, “their parents are the most influential people in their college experience.”

Arnela agrees with Gitau and said her mother is her biggest influence.

“Everything that I do or have accomplished is because of her,” she said.

Still, Gitau warned against parents doing too much for their students because that “would inhibit the process of student development.”

“As someone who is coming from a background in student affairs, we always have to check…about maintaining that good balance between supporting your student and letting them go,” Gitau said.

Gibson said there were no specific parameters for the nominations and that they left it “kind of open ended so that the students can tell their stories.”

Arnela told the story in her nomination about getting the letter in the mail stating she had received a full scholarship to NKU and how she and her mother cried together.

“She was proud of me, but all my excitement stemmed from the hope she could stop working so hard for me and do something for herself instead,” Arnela said.

Arnela said she didn’t think her mother would win the award when she wrote the essay but that she thought it would be a “cool thing to do in general” because her mother had done so much for her.

“I thought that writing this essay was kind of like writing a letter to her,” Arnela said.

Arnela said the nomination letter speaks for itself of the love this mother and daughter share.

“She reminds me every day not to give up, to always believe the future is brighter if you work for it, and the greatest gift she gives is her endless love.”