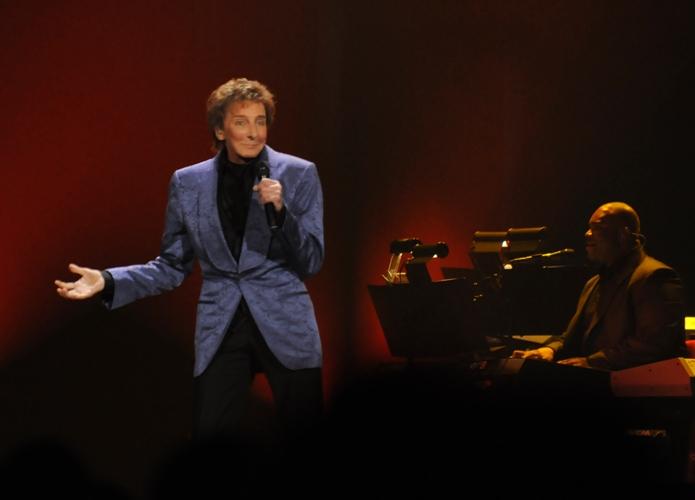 Fans of all ages packed into the Bank of Kentucky Center to see the legendary Barry Manilow perform on April 20. The show started thirty minutes behind schedule due to the continuous flow of incoming ‘fanilows.’ The decision to bring Manilow to the BOKC was questioned by NKU’s Fake News Twitter handle, but students were spread throughout the audience.

At approximately 8 p.m. Manilow finally appeared, opening the show with “Miracle.” Wearing all black accenting with a blue blazer, Manilow looked great and kept up with his backup singers in spite of having a hip replacement late last year.

The 90-minute show recalled Manilow’s career with clips from TV appearances, family videos, album covers and photos from his childhood. When the album cover of “If I Should Love Again” appeared, Manilow quipped, “I look like a Jewish Fabio.”

Manilow paid tribute to his friend Dick Clark, who passed away April 18. Manilow continued by performing the theme song to “American Bandstand” as a clip of his performance with Clark played on the overhead screen.

Along with his songs, Manilow’s sense of humor captivated the audience. He mentioned once that he felt like he “was the Justin Bieber of the seventies.”

Manilow effortlessly switched between the keyboard on one side of the stage and the black baby grand piano on the other. He played snippets of “Even Now” and “New York City Rhythm.”

Manilow finished the show with his major hits “I Made It Through the Rain,” “Mandy” and “Copacabana.” The audience sang along as Manilow performed “I Write the Songs.” As Manilow performed the grand finale “Everything’s Gonna Be Alright” curtains closed and streamers shot into the audience, bringing to a close a night of reflection on the career of the beloved performer.