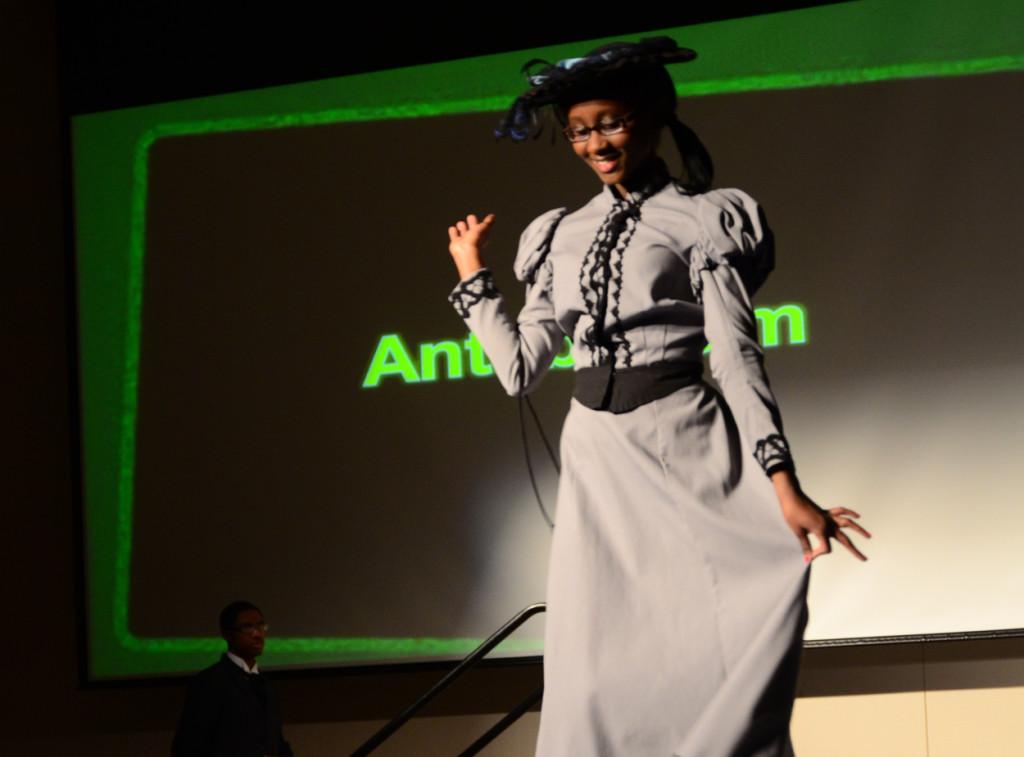 A hush fell over the seated audience as the female models emerged from the back of the room to line the aisles. The speakers resonated with Michael Jackson’s “Remember the Time” as the male models began to ascend the t-shaped stage. As the song continued, the models danced to the beat of the music.

The evening of Feb. 23, Northern Kentucky University’s Student Union ballroom was filled with people in support of the “Remember the Time” Fashion Show. The event was a collaboration between NKU’s National Association for the Advancement of Colored People (NAACP) branch and the African American Student Affairs (AASA) to promote Black History Month.

Anntress Manion, a sophomore and public relations coordinator of NKU’s NAACP branch has been working with her co-chair Brooke Ratcliffe, a sophomore and parliamentarian of NKU’s NAACP branch, since October to put this event together. Manion and Ratcliffe said the show was a way of breaking the pattern of past Black History events. “We wanted to have a fashion show because we didn’t want to do the traditional programs, such as lectures or a workshop,” Manion said.

The theme “Bringing it Back” developed though the process of planning the event. Ratcliffe said she learned that “while putting together the show, nothing that we wear today is new. It was all worn before.” Manion said the show is a reflection of “what our parents and grandparents used to wear and we’re just bringing it back.”

Deborah Strahorn, coordinator of AASA, said, “It’s is a social program and it’s supposed to be fun, but it also has some historical content to it.”
Manion and Ratcliffe planned the show to profile the black history behind each era of fashion.

The show revisited the fashion and the history of the Antebellum Period, The Harlem Renaissance, Civil Rights, the 1970s through the ‘90s and all the way up to the present day.
The show started with host Rico Weaver, health and wellness officer of NAACP, dancing down the runway to “Flashing Lights” by Kanye West before bowing to one knee at end of the stage. Co-host Nicole White, treasurer of NAACP, followed Weaver’s entrance and ended by sitting on Weaver’s knee.

The audience cheered with excitement as Weaver and White stood and announced the show. Before introducing the first era the hosts interacted with the crowd by playing music trivia. After a few songs, the audience was ready for the models.

The first model to grace the stage was Orsella Irambona wearing a gown from the Antebellum period. During this time period it was more respectful for women to cover themselves. The result was Irambona’s long gown, with sleeves covering her arms. Although, her dress covered a majority of her skin, embroidery and a small waistline made the gown attractive.

When moving between eras Weaver and White would give the audience a brief history. They would highlight the most important events in black history and its affect on fashion.
During the intermission, Jeffonia Wynn from Norse Code Radio’s The Ebony J Show gave away a Macy’s gift card to the best-dressed female and another to the best-dressed male from the audience. Wynn announced that the winners had to compete with each other by “working the runway.”

Taylor Staples wrapped up the intermission by singing Michael Jackson’s “The Way You Make Me Feel.” Before she finished, the audience was clapping along with the song.
Once they had reached the present era, all 16 models displayed a sense of the fashion from the 2000s. The models took the stage by twos before lining the aisle of the audience one last time. Before leaving the hosts asked the audience to join their soul train.

The energetic audience left the room through the soul train after Manion and Ratcliffe gave their thank yous to all those that helped put together a successful show.
Psychology major, Sabra Dunlap fulfilled the hopes of Manion, who wanted to create something that was fun and creative. After seeing the show, Dunlap said, “I thought it was very creative.”
Although Black History month is coming to an end you can follow the NKU’s branch of NAACP on Twitter or Facebook. Twitter: @NKU_NAACP. Facebook: Northern Kentucky University NAACP Unit #3853.