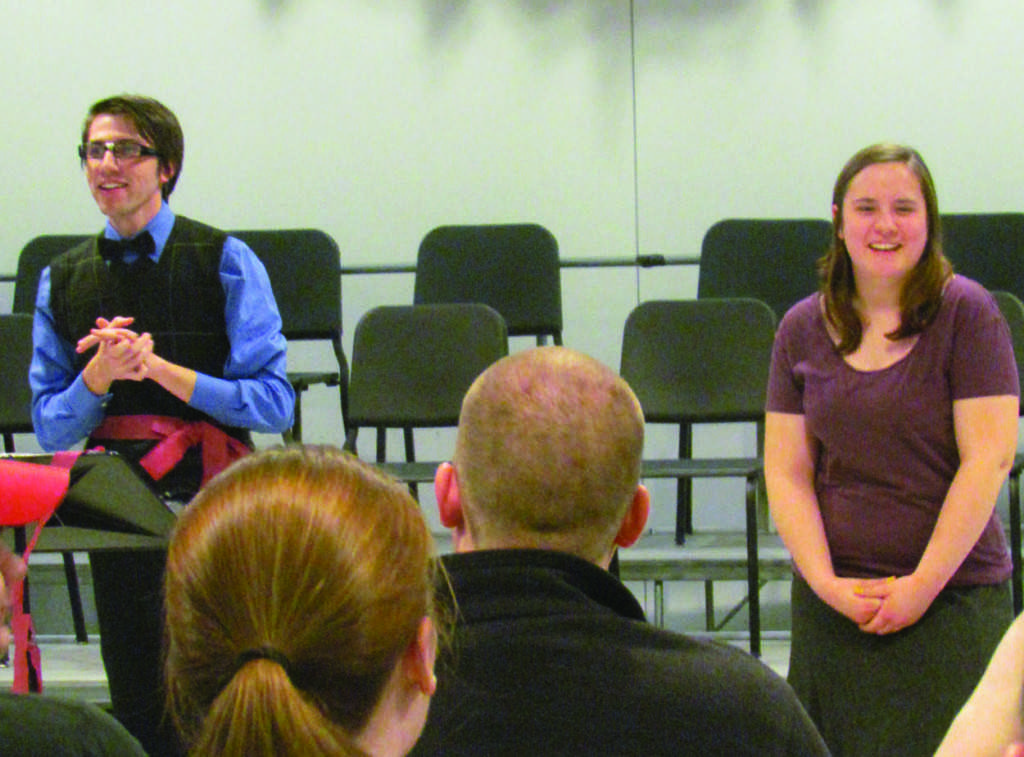 Laughter and applause floated through the hallways of the Fine Arts building as the Kappa Kappa Psi’s Date Auction preceded in the choir room. Dressed in rolled up pants, a sweater vest, bow tie and complimentary taped glasses, Ryan Downey, Kappa Kappa Psi treasurer and junior chemistry and music education major, was the elected auctioneer for the evening’s fundraiser.
Members of Kappa Kappa Psi and music majors alike were auctioned off as dates to help raise money for the band program at Northern Kentucky University.
“It was very successful so we decided to have it again this year near Valentine’s Day,” said Katharine Tokosh, senior business management major and president of the organization.
Downey persuaded the audience with his comedic personality and tall socks to bid on dates of both sexes. By the end of the night, the bids ranged anywhere from a meekly four dollars to a whopping 60 dollars.
“The most important thing is that people have fun,” Downey said.
Two long-lasting relationships grew from the very first Date Night Auction held three years ago. Unfortunately the couples were unavailable to attend last night’s festivities. “It actually has proven to be reliable,” said Rachael Gasser, sophomore music education major and vice president of Kappa Kappa Psi.
Kappa Kappa Psi is the national honorary band fraternity on NKU’s campus. Gasser explained that Kappa Kappa Psi members all perform with an ensemble and travel with the sports teams. The money raised goes to the different bands, including concert and pep bands.
If you have any questions about Kappa Kappa Psi and their involvement on campus, contact Katharine Tokosh at tokoshk1@nku.edu or the fraternity’s advisor, Brant Karrick at karrickb@nku.edu.