Paul Simon livens up the BOKC

It was surprising to see Paul Simon scheduled to play the Bank of Kentucky Center. Last winter, Bob Dylan came to the BOKC. While Dylan put on a great show, the 70-year-old didn’t draw the expected crowd. For that reason, it was a surprise to see Simon, also 70 years old, making a stop at Northern Kentucky.
Simon played at the BOKC Nov. 23 with opener Punch Brothers, a bluegrass band from New York. 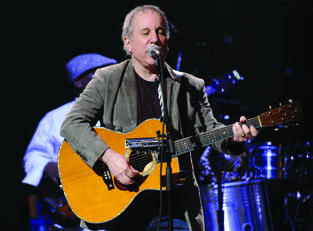 The Punch Brothers warmed up the 3,000-plus crowd nicely with instrumentals and originals. The five-piece band fit in perfectly with the fans in the Bluegrass State. The band consisted of a guitar, mandolin, banjo, fiddle and upright bass. While the Punch Brothers only had a handful of songs, two stood out amongst the others. The first was “This is the Song,” a haunting tune led by mandolinist Chris Thile about a troubled relationship. The second standout was “Rye,” an upbeat song that highlights the effects of rye whiskey.

While the Punch Brothers are making a name for themselves, Paul Simon was still the man of the night.
When Simon stepped onto the stage, he received a roaring ovation — from there, he had the crowd in his hands. BOKC was cut in half, with the stage set in the middle of the arena. This gave a more intimate setting to the evening.

Throughout the show, the crowd sang along, danced in the aisles and in their seats. It was apparent everyone enjoyed every minute of the show. They came for a good time and good music. They got it. It is safe to say that this crowd was loud and responsive.

Simon’s band is made up of nine instrumentalists. The instruments onstage ranged from an accordion to a xylophone. Instead of keeping the focus on himself, Simon let his band members shine by giving each of them at least one solo.

As the show went on, it became evident that Simon is very particular about his guitars. He swapped guitars after every song. His voice was very soft and hard to hear over his band; but at 70 years old, Paul Simon’s voice is clearer and stronger compared to singers even half his age.

The selections on the set list were a mixed bag. Simon stayed away from Simon and Garfunkel hits and stuck to his solo material. The highlights of the night included “50 Ways to Leave Your Lover,” “Mother and Child Reunion” and “Diamonds on the Soles of her Shoes.”

Simon began the show at 8:30 p.m. and played nonstop for two hours. He came back out for two encores, and the feeling in the arena was that he just couldn’t stop playing. For the first encore, He returned to the stage alone, acoustic guitar in hand, and played “The Sound of Silence.” Even without Art Garfunkel beside him, Simon’s performance was strong enough to carry the song solo. Simon played three more songs, including a cover of “Here Comes the Sun” by The Beatles.

The performance impressed even a person unfamiliar with Simon’s music outside of his work with Garfunkel. There is something about his music: It just makes you feel good.