Benten-ya performed on Thursday to students and faculty members. 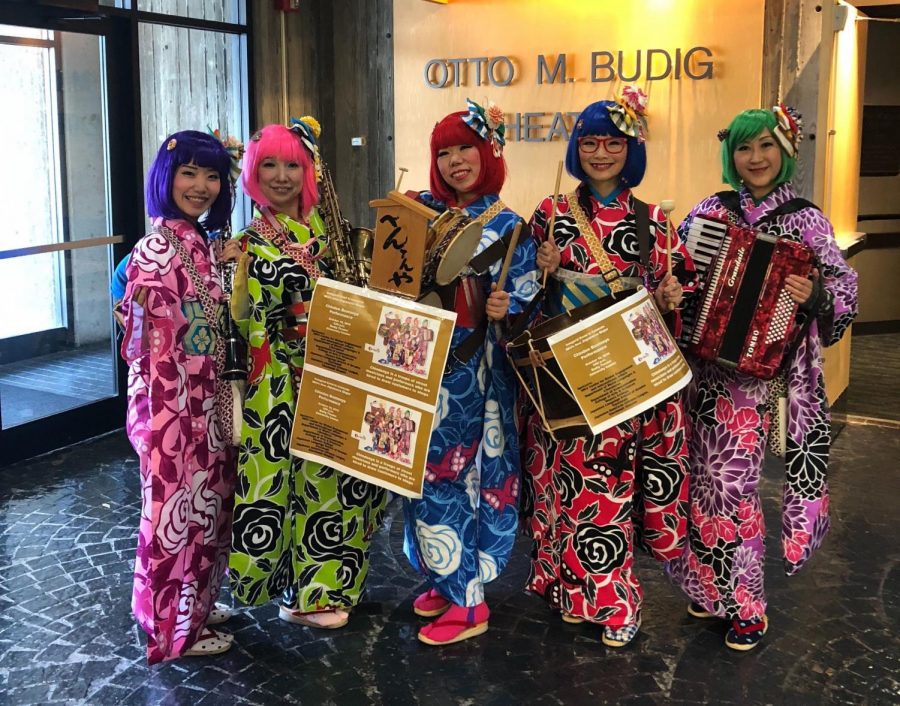 “The good old chindonya, changing the world from dark to light, people both young and old clap their hands, chinchira dondon chin dondon ….”

This simple line from a chindonya troupe in Kumayama, Japan brings to mind a packed square filled with people crowded around a small group of performers drawn in by their rhythmic instruments.

Benten-ya, a renowned chindonya troupe, traveled across the world to Highland Heights to perform for students and faculty in the Otto M. Budig Theatre on Thursday.

In 1845 in Osaka, Japan, a candy salesman named Amekatsu saw an opportunity to fill a vital role in the growing industrial society. He decided to help a local theatre company by performing to people in order to draw them to buy tickets.  For Japan, this was the birth of advertising and the start of the formation of Chindon-ya groups, who became essential in helping businesses sell to customers.

This marketing trend experienced many booms and busts and cultural changes over the decades but accomplished a recent upsurge in popularity due to their use in traditional Japanese ceremonies and business events.

Yasue Kuwahara, program director for popular culture studies, worked with a Chindonya group on her sabbatical in Japan and all of her memories of the groups came rushing back.

“When I was growing up, they were very prevalent in society, but now young people do not know what I am talking about. After talking to international students, many seem confused when I mention Chindonya,” Kuwahara said.

She tried to find research about the ancient art form but her search dug up little information. Many other traditions in Japan take precedent over Chindonya, almost erasing it from Japan’s history.

She decided that she wanted NKU’s students to experience the same delight as her when watching them perform.

“This campus event allows students to get a cultural experience that many are unlikely to see without traveling across the world,” Kuwahara said.

The art’s recent re-emergence appears temporarily and only time will tell how long it will last. As of now, only 150 chindonya groups remain.

It remains impressive that the group, Benten-ya, acquired such an international presence and found themselves performing across the globe at NKU’s campus.

Most groups play the chindon. Constructed from a small metal gong and two traditional Japanese drums mounted together on a metal frame, the instrument is usually played by a man, but Benten-ya is breaking tradition by being an all-female group.

Unlike American trend breakers, the group experienced little backlash from the public despite the majority of Chindonya groups containing a mix of men and women.

“When we perform, we hope that married women see us on stage enjoying ourselves and working hard at the same time, leading them to want to pursue their own goals,” Susie, the chief performer and marketer for Benten-ya said.

Susie said that being in a chindonya group is a lot of hard work.

“In order to be part of a chindonya you need to learn to smile a lot, wear a kimono, be able to do a lot of shouting and talking, learn dance routines that involve playing and singing at the same time. It’s almost like joining a marching band,” Susie said.

Every group in Japan tries its best to stand out, but Benten-ya employs the eye-catching trick of having each member wear a different neon-colored wig cut in a similar style. This allows them to look like a cohesive group while still retaining their individuality. They dress in a traditional Japanese kimono and wear large flowers and bows to further differentiate themselves from other groups.

“Traditionally Chindonya wore westernized clothing to stand out, but when civilians started wearing western clothing they switched to wearing kimonos to attract more people to the stores they worked for and to bring attention to traditional Japanese culture,” Susie said.

Benzaiten, the goddess of entertainment, music and wealth in Japan, inspired the name of Benten-ya, since they want to create happiness and put smiles on people’s faces.

The group formed in 2008, accumulating many awards on their journey to stardom.  They broke the amateur barrier in 2011, enabling them to reach new heights of success and attention as professionals.  Benten-ya garnered the media’s eyes when they won the National Competition in 2015 boosting their image in Japan.

They have played at the EXPO Milano in Milano, Italy in 2015, the HYPER JAPAN in London, UK in 2015, the Japan Expo in Paris, France in 2016 and Japan Vietnam Festival in Ho Chi Minh, Vietnam.

Over the years, they gathered a loyal fan base in Japan and around the world. They sell merchandise on their fan page and also offer a fan membership allowing fans to pay a fee in order to receive special benefits like a once a year private event and birthday cards sent out on fans’ birthdays.

“Out of the countries I have visited, America is my favorite,” Susie said.

The demographics of their audience are young children to older adults, and they choose their songs based on the attendees. Thursday, the group performed for NKU students and faculty, so they chose two Western songs from different decades: ‘Shake It Off’ by Taylor Swift to appeal to the younger generation and ‘Yellow Submarine’ by The Beatles for the older generation.

To further draw the audience into the performance, they invited people to come up on stage to try on costumes and learn how to play their instruments.