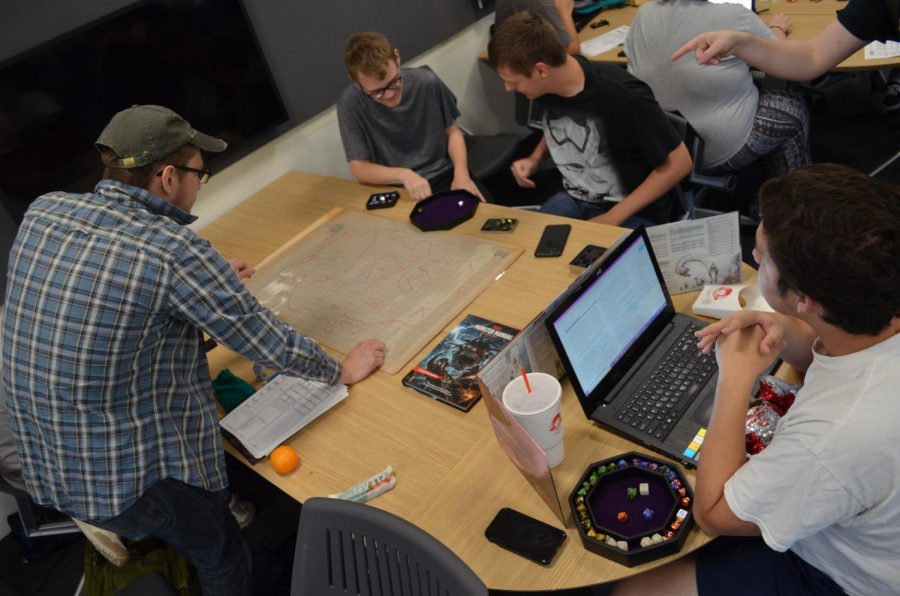 Every Friday, deep in Founder’s Hall, a group of students join together to create stories of fantastic quests, treasure, deadly foes, rescue and more. These students, as part of Norse & Dragons, have found a way to creatively represent themselves in one of the most overlooked mediums for expression: tabletop gaming.

Dungeons & Dragons is a fantasy role-playing game that allows players to curate their most engaging stories, and NKU students have found a home by playing D&D on campus. Norse & Dragons is a club for NKU students to get together and express their love for the storytelling and fantasy tabletop game.

The current president of Norse & Dragons, Dylan Blades, has a special connection with D&D.

“There is just a freedom you don’t get in any other games. It is just as much about interacting with people as it is about the game itself,” Blades said.

Norse & Dragons has helped many students feel as if they are a part of a community that is deeper than just the game. Club member Taylor House really enjoys the aspect of improvised and prepared stories that help spark creativity.

“It can be hard for me to express myself creatively everyday, even as an art major. Norse & Dragons helps me by giving me books of stories to help me create my own ideas,” House said.

“It is the greatest game ever created … everyone should play at least once,” Decker said.

Decker has a strong passion for D&D because it is completely different from any other game.

“The way that the game plays out is so different from anything else and it’s an experience,” Decker said.

The club’s public relations representative, Birdy Baker, said being a part of the group has improved their time on campus immensely. Baker struggles with anxiety and talking to people, but Norse & Dragons has helped them to communicate and build relationships with people who have similar interests.

Many freshmen have already joined the organization and found a home on campus. Freshman Andrew Horning has recently gained interest in D&D and he has enjoyed the social experience that comes with the game.

“I already have a group that meets outside of this session,” Horning said.

Horning feels that D&D has a specific type of experience that has something to offer for anyone who decides to play.

If the members of Norse & Dragons asks that the community take anything from their presence on campus, it would be that it is worth trying and immersing yourself into, even if it’s not something that sticks.

Norse & Dragons meets Tuesdays from 6 p.m. to 7 p.m. in Business Center room 110, and plays D&D in Founders Hall room 259 on Fridays. Anyone is welcome to attend, and no prior knowledge of D&D is required.