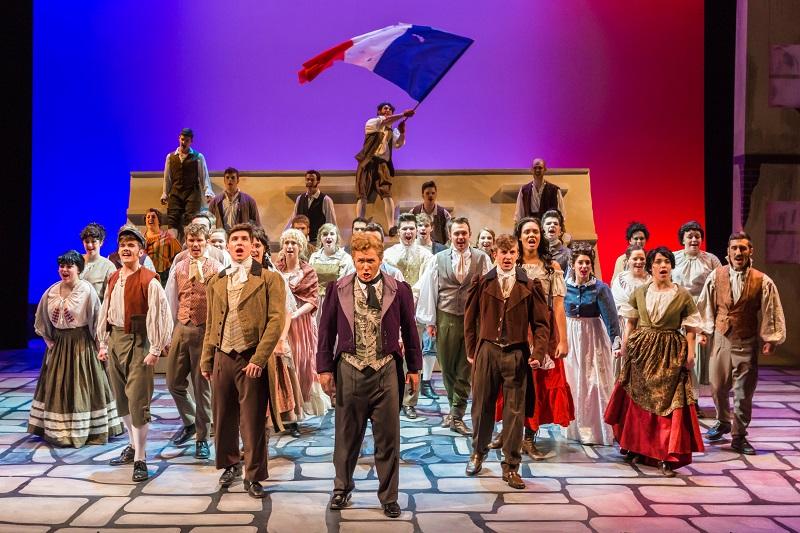 A scene from Les Mis which had its final performance of the season on March 1. The 2015-2016 season was announced last week.

With power and presence, one of the largest casts Corbett Theatre has ever seen took the mainstage Feb. 18 in NKU’s latest production, “Les Miserables.”

Director Ken Jones sticks with your standard approach to tell the tale of the social struggle and indifferences in the years after the French Revolution.

From Jean Valjean’s struggle with his past as portrayed by Jason Vest, Fantine’s heart wrenching tale with her separation from her daughter as portrayed by Kathryn Miller, to Cosette stumbling through a life she never completely understood as portrayed by Sophia Dewald, the entire cast of “Les Miserables” poetically convey the emotions of each character, making you feel for them as though you’d known them for years.

With a soul in their voice Vest, Miller, Dewald and Éponine portrayed by Miki Abraham sang in a raw emotion that could be felt throughout the theatre. Miller’s “I Dreamed a Dream” brings a tear to your eye while Olivia Bayer’s “Castle on a Cloud” speaks mountains to the lost child looking for a way out.

In a stand out for me, I felt that Abraham was one of the strongest performances of the show in a stunning rendition of “On My Own.” With a voice that could conquer the world, Abraham delivered Éponine’s role with a pride all in its own.

The cast donned costumes pertaining to the time with colors seemingly representative of the social class. Many of the upper class, much like Valjean himself, donned many blues and other bright colors while those of the lower class was dressed in duller colors of autumn.

When the play begins, France is adjusting to a new King after Napoleon Bonaparte has been exiled to St. Helena. Social classes continue to clash as years of oppression continue to take its toll on the morale of citizens.

“Les Miserables” follows the transformation of Valjean and his attempts to better himself and the world around him after serving 19 years in prison for stealing a loaf of bread and then for trying to escape later on.

Valjean uses his second chance to better the city of Montreuil-sur-Mer as mayor and factory owner and raising a young Cosette after her mother dies.

The trials of Valjean’s life and the raising of Cosette eventually lead to the climax of the play as The Friends of ABC barricade the streets of Paris to take on those in power in June’s Rebellion.

Vest portrays a fundamentally sound Valjean taking the trials of his life as personally as an actor can, destroying the lyrics of each song with a passion.

Each member of the cast in NKU’s production of “Les Miserables” clearly embody their role wholeheartedly and bring the play to life before your eyes.

Jack Manion’s Thénardier left you feeling slightly freaked out and perfectly amused as he danced his way around stage swindling his way through life feeding on the misfortune of others.

Already selling over 4,000 tickets, NKU’s largest production lives up to the stamina the name of the play carries alone.

“Les Miserables” has a soul while being set in a time where the people in charge lacked one. Jones and his cast beautifully portray the story that so many know, and yet it still seems as if you’re seeing it for the first time.