A night with “The Wedding Singer” 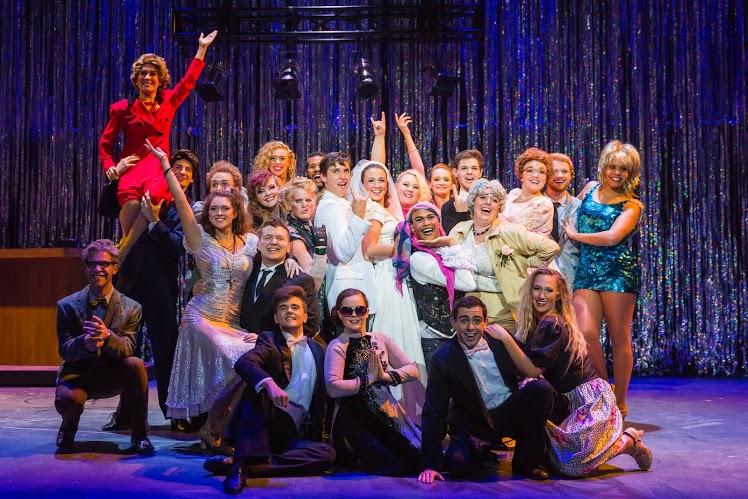 Cast of The Wedding Singer.

If you’re lucky, you experience something in your life that lingers with you and for a moment, you are both honored to have witnessed it and saddened that it’s over.

That was exactly how I felt when “The Wedding Singer” ended at NKU’s Corbett Theatre because the moment I sat in my seat and heard the totally radical 80s music, I knew the night would be spectacular and this cast and crew did not disappointed.

The opening number, “It’s Your Wedding Day”, was a heart-pounding experience that set the tone for the rest of the show and just when I thought nothing could top it, the following scenes kept getting better.

My head was bobbing and my toes were tapping the entire time and when I wasn’t embarrassing myself by dancing in my seat, I was laughing hysterically along with the rest of the audience.

‘The Wedding Singer” is a musical based on the popular 1998 Adam Sandler movie about Robbie Hart, a successful wedding singer who is left at the altar by his fiancée, and Julia Sullivan, the waitress who helps to renew Robbie’s faith in love.

Noah Berry, senior, was phenomenal in the roll of the funny and occasionally awkward wedding singer and kept me and the audience in stitches the entire night.

Kathryn Miller, senior, was equally entertaining to watch and outstanding in the roll of girl-next-door Julia who finds herself suddenly torn between Robbie and Glen, her cheating/Wall Street investor/jerk of a fiancée played brilliantly by senior Cody Dale.

Some of my favorite scenes were the moments when Berry and Miller were together on stage because the two we’re simply magical. The scene when Robbie was thrown into a dumpster and Julia tries to coax him out, when they register for Julia and Glen’s wedding or when Robbie flies to Vegas and sings, “Grow Old With You” in front of a host of vegas impersonators were all great examples of why Berry and Miller were a joy to watch.

Sophomore Taylor Greatbatch was fantastically fabulous as the flamboyant George and when paired with senior Mary Kate Venegas’ portrayal of Rosie, the grandmother we all wish we had, the laughs never stopped.

Several audience members could be overheard during intermission saying that this show was amazing and something they’d want to see again and again.

“It’s that show that everyone wants to come back and see,” Andrew Karrick, sophomore, said.

Antoinette Aponte-Allman, sophomore, also said the show was fantastic and that there’s was a connection between the cast and the audience that made “everyone so involved” in the show.

A great thing about this show was the set was so versatile, only a few main sets were needed that could be configured differently for each scene which made it easy to focus on the actors and, of course, the costumes.

The big hair, the blue eye shadow and, oh, the 80s fashions! Between the puffed sleeves and shoulder pads to a mullet dress and the “Miami Vice” suits, it was no mistaking why the 80s was so fabulous. Add to that a slew of pop culture references from Michael Jackson, Marty McFly, Billy Idol and Tina Turner impersonators to the water-splashing dance routine straight out of “Flash Dance”, it’s no wonder why I loved every minute of it.

There were a few technical issues that needed to be worked out with the microphones and light cues but overall, this was a fantastic performance with spot-on acting, extravagant musical numbers and authentic costumes, hair & makeup that made this performance a great night of theatre.The Wedding Singer runs until Nov. 2 and if you only see one show this semester, this is definitely the show to see!