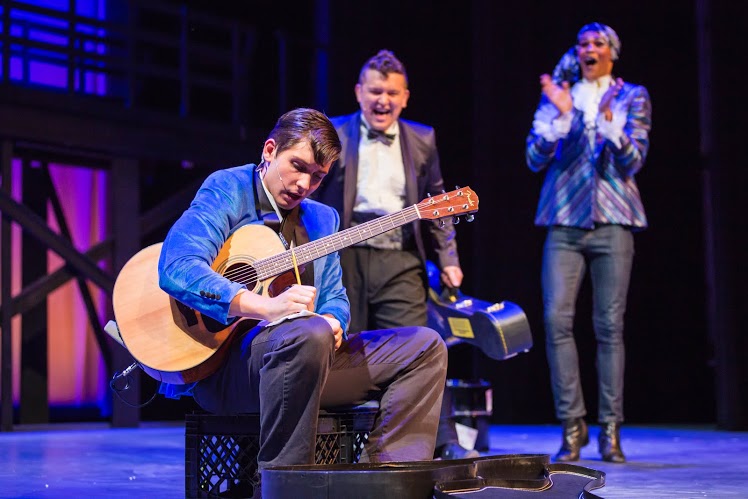 The theatre department’s second show of the season is bringing a comedy classic to the stage. “The Wedding Singer,” based on the film starring Adam Sandler, takes the comedy and puts it to original songs and dance.

“This is the big show of the semester,” Taylor Greatbatch, a sophomore musical theatre major and cast member, said.

The biggest part of the show may just be the dance numbers and choreographer Tracey Bonner is putting her own high energy spin on each number.

The cast has recognized that high energy and intensity of the numbers Bonner has created.

“The music is great, the dancing is insanely intense,” Greatbatch said.

Even though they find it insanely intense, Bonner sees them working hard and perfecting each number.

The numbers are all very different and very specific. Bonner has also incorporated many quick changes throughout the show.

“It really keeps us all on our toes,” Mary Kate Vanegas, a senior musical theatre major and cast member, said. “I mean the ensemble can go from a group of grandmas to strippers.”

Bonner believes in working with the cast to individualize each dance as much possible, while also putting her own ‘Tracey spin’ on the numbers.

“One of the things that’s very Tracey, that’s very who I am, is with dance I like to tell a story,” Bonner said. “So I work really hard to make sure that the movement that we create is generated by the character. So whatever the character would do that’s the action we’ll do.”

Making it unique wasn’t her only goal, Bonner also wanted to incorporate as many iconic 80s dances into her choreography as well.

“I’ve had a great time looking at iconic 80’s dance moves, we’ve got the moonwalk, the worm… there’s a Michael Jackson ‘Thriller’ moment, there’s even a ‘Carlton’ in there,” Bonner said.  “So learning some of those iconic pieces are a fun part of our rehearsal process.”

The 80s were a big part of the show, according to Greatbatch the cast was asked to do background research on the decade to ensure authenticity.

“I feel like the 80s are a very overlooked time period, it was such a dynamic decade,” Greatbatch said.

Though based on the 1998 film, the musical tells the story in it’s own way.

“I’m really enjoying having that sort of reference,” Bonner said. “Thing I’m doing as an artist is trying to use that as a resource not as an exact model, so that I can use it for inspiration and build on it.”

For Vanegas, who plays Rosie, the lead characters grandmother, she had a strong reference point from the film to play off of, but chose not to rewatch the film.

“I didn’t want to look at it and just end up copying that performance,” Vanegas said. “I did pull from other characters like the Golden Girls and the grandma in The Proposal, I like to take from multiple sources and then make things my own.”

Greatbatch didn’t have the same reference point as Vanegas for his character George. George is a flamboyant gay drag queen who isn’t heavily featured in the film. In the musical however he plays a much larger role. Greatbatch was given a unique opportunity to bring to life and underused character with the goal of being certain he didn’t stereotype George or make him into a caricature.

“I look like a 6 ½ foot basketball player and I’m playing an effeminate drag queen,” Greatbatch said. “It was almost like I got to create my own character.”

The whole cast and crew are ready for their opening night.

“Opening night is almost like Christmas to us, all the work for months and we finally get to show it off,” Greatbatch said.

Vanegas also is looking forward to an audience. She loves the musical and can’t wait to see other people love it. Since the cast consistently has her laughing, she thinks the audience will react the same.

Greatbatch believes the audience mean everything to any show.

“You never really know everything about the show till you have an audience, when they laugh or applaud you know you’ve done something right,” Greatbatch said. “It’s like a waiter getting a really good tip.”

For Bonner it’s about more than the audience enjoying it, she’s also hoping to invoke iconic memories in some of the older audiences.

“For our older audiences that lived through it to be like ‘oh my god I remember when I did my hair like that’ or ‘I remember when I wore scrunchies’,” Bonner said. “ They’ll get to relate our show to their own history.”

“The Wedding Singer” opens on Oct. 23 in The Corbett Theatre and runs through Nov. 2.