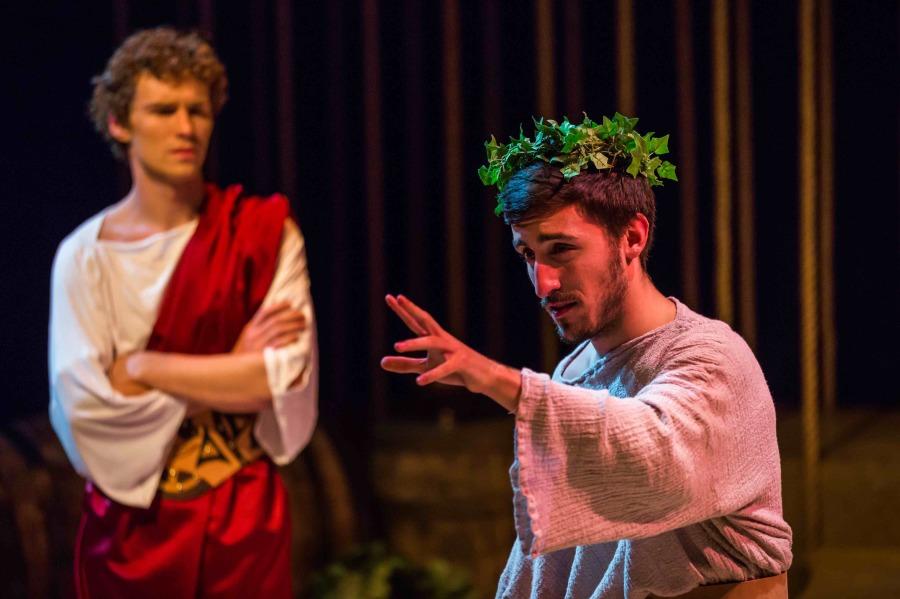 The first play of the NKU theatre season opens this Thursday and brings to life a classic Greek tragedy.

The Bacchae is the story of Dionysus, the god of wine and revelry, who seeks vengeance upon Pentheus, the king of Thebes and his family. Pentheus has rejected that Dionysus is a god, born to Zeus and the mortal Semele, the daughter of Cadmus who is Pentheus’ grandfather. In his rage at being blasphemed, Dionysus disguises himself as a mortal, bewitches the women of Thebes and eventually leads Pentheus to his doom.

“Ultimately what you have [in the play] is a conflict between reason and passion, between civil law and the law of the gods, and the gods are going to win,” Director Sandra Forman said.

The play was written in 410 BC by Euripides who was considered the most modern of the Greek writers, according to Forman.

“Most Greek plays are named after the protagonist,” Forman explained, but Euripides didn’t name the play after Dionysus or even Pentheus.

“He called it The Bacchae,” Forman said. “The women are what’s important. The women’s growth, the women’s experience and this was radical.”

Angel Kerns, senior BFA acting major, plays one of the women in the chorus and said, “It makes me feel very important and privileged and very humble to be cast in a role like this.”

“The play isn’t call Dionysus, it’s called The Bacchae and we are the Bacchae so we’re basically the main characters,” Kerns said.

Forman said all the students were open to the possibilities of bringing this play to life.

“I think they wanted to explore this part of theatrical history that they didn’t know that well so they’ve all been wonderful,” Forman said. “This particular cast has been absolutely perfect. They’ve been eager to learn and eager to explore and try new things and that’s been exciting.”

Matt Krieg, senior BFA acting major, who plays Dionysus said he prepared by researching the god’s backstory and his mythos.

“He’s the god of delight and pleasure so he’s very lighthearted but he can also be vicious as proven in this show,” Krieg said. “It was more researching him and trying to capture that.”

Krieg and the rest of the cast have been rehearsing since the beginning of the semester and said one struggle is how much text there was to learn.

“There’s a lot of lines to learn and it’s translated from Greek so it’s a lot of the references are lost on us,” Krieg said. “It’s just different than modern theatre.”

Kerns agreed with Krieg and said, “It can be hard to understand [the play] because it’s a classical Greek tragedy, but I think [the cast] made it really easy to understand and people will leave understanding what happened.”

Krieg still enjoyed the upsides to his character.

“I get to play a god,” Krieg said. “It’s just a lot of fun being this larger than life character.”

Forman said she tries to be as faithful to the playwright as she can and tries to “tell his story,” and then the audience will get what they get.

“I’m not out to teach a lesson. That’s not what I’m about,” Forman said.

However, Forman does have hopes for the audience.

The Bacchae opens Thursday, Sept. 25 at NKU’s Robert & Rosemary Stauss Theatre and runs until Oct. 5 and people can contact the box office at (859) 572-5464 or boxoffice@nku.edu for information about showtimes and tickets.