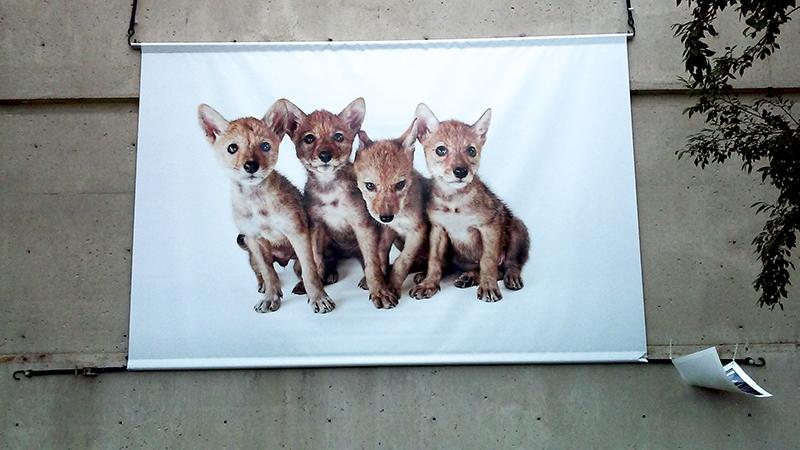 A litter of coyote pups, part of the National Geographic exhibit.

Eleven of the 12 photos displayed on campus buildings like Steely Library, Nunn Hall and the Fine Arts Center are Sartore’s.

The largest work, the Serengeti lion on the front of the Fine Arts Center, belongs to Nichols.

“It’s a very straightforward approach to photography and it’s very creative in the way they are getting these pictures,” David Knight, director of exhibitions and collections, said.

Each photographer takes a different approach to his work. Sartore travels to zoos around the country and takes pictures of endangered species, using photographic backdrop paper for his subjects.

Nichols photographed lions in the Serengeti by using a camera mounted on a drone. He placed a night filter during the evening so he wouldn’t disturb the animals in their natural habitat.

The exhibitions, which open to the public on Sept. 25 across campus, will display seven more photo banners of Nichols’ in the Fine Arts gallery, including a video describing how he takes the photos.

Sartore will have 28 of his photos displayed in the smaller third floor gallery.

Knight said this exhibit took about a year and a half of planning and finding funding because it’s all externally funded.

Last spring, Knight said his department were given a list of possible images they could use for inside and outside and figured out how much space that they could utilize in the gallery.

Knight expects a high attendance because of FotoFocus, a celebration of lens-based art and photography, which will host 50 exhibitions of photography in Greater Cincinnati. NKU is one of the few venues that are hosting two separate exhibitions and two public lectures.

Both photographers will be speaking in Greaves Concert Hall during the third week of October.

Knight is joining with different departments on campus to figure out how the exhibits will be integrated into the campus environment. There will be three other university lectures related to the exhibits.

One will be given by Matthew Albritton, a photography faculty member, who will talk about the process of photographing that Nichols and Sartore used.

“There’s also going to be other faculty members talking about the environmental issues related to this so that the campus understands the importance of these two events,” Knight said.

He said the faculty members giving the lectures will be Kirsten Schwarz and Jennifer Cellio.

According to Knight, environmental study students Kathryn Keefe and Emily Keener did research on these animals over the summer to make presentations for these exhibits.

Both Keefe and Keener are hosting tours for NKU students and kids K-12 when the exhibits open and will have several interactive games for them to play so they can learn more about these animals.

“It’s a way of getting people to learn about science through a different lens and it’s really a lens of art but it’s also about collaboration. We decided to take art and science and put them together,” Keefe said.

Keener, who researched the animals of Sartore’s work, compiled a fun fact sheet to further engage kids with the subjects.

“It’s not just about the animals’ image but what’s unique about them,” Keener said.

She added that at first, it was just her using the pictures for her research but then it transitioned into something more.

“I kind of had this revelation of sort of, like I don’t need to make science fit the picture because the animals are already communicating something and I just need to translate it,” Keener said.

The girls spent their entire summer working on their presentations for these photos and said they are excited for the exhibits to begin.

“It’s just kind of like people coming together and bringing their ideas and maybe this may not even make a change but it’s going to get people thinking which is what we want. We want people to think of how important these animals are, how important the environment is,” said Kathryn Keefe.

Because NKU purchased those photographs, they are going to be given to some of the different schools that will be coming and the information for that particular image to use in their classrooms.

“Knowing how successful this banner program has been on campus and considering we now have these pre-determined locations for banners, we are thinking about how we could do this for other exhibits in the future,” Knight said.

Nichols will speak at 7 p.m. on Oct. 15 and Sartore will hold his lecture the following evening. A reception and book signing will be held in the galleries after the speeches.