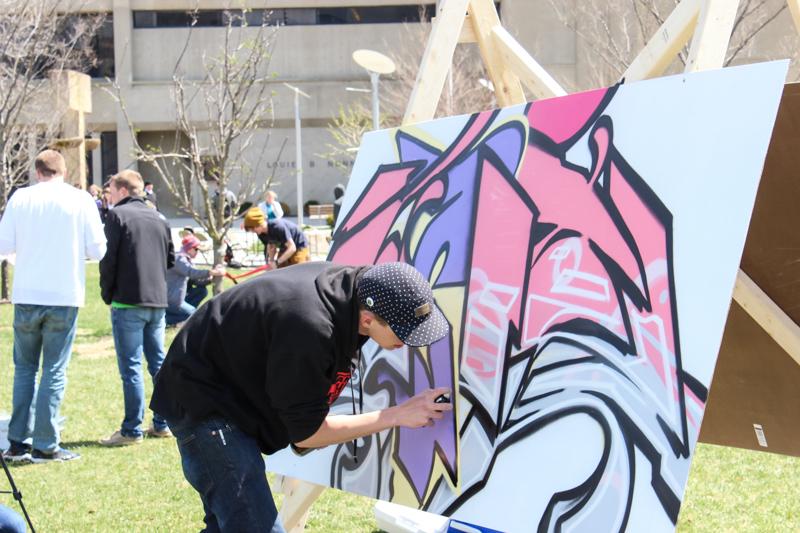 One of the artists create their unique work of art on Griffin Hall lawn.

The event, put on by the Collegiate Entrepreneurship Organization (CEO),  started at 11 a.m. and ran until late Wednesday evening. It featured 12 artists doing live artwork, and many booths where other art could be purchased, and live music.

“It basically started out as something fun that we wanted to do,” said Jason Hulett, a CEO member.

According to Paul Kemp, another CEO member, the idea for Graffiti Fest came about back in November, but they didn’t really start planning until this spring.

Other organizations involved in planning the event included Punch Press Threads and Higher Level Art, according to Hulett.

Also involved in the organization of the event was Jennifer Gardner’s event planning class, who helped with social media outreach and chalking the sidewalks for promotion.

“Paul Kemp, Michael Stubbs, and I started Punch Press Threads on campus,” said Hulett “We thought it’d be cool if we did something graffiti-related on campus, just because it would be so different from anything we’d seen here before, and then we just kind of took it and ran with it.”

Artists at the event

The day kicked of with 12 artists taking claim to 4×8 panels in the center of Griffin Lawn, to graffiti in their own unique way.

Throughout the day, there was also live music featured from the Reflectives, NKU student Austin Livingood, Big Rock Club, and DJ Vision.

“Once I heard they were putting this on, I immediately sent in my sketches,” said David Bockweg, an artist and NKU student.

“I mainly do letter graffiti,” Bockweg said. “So I just took that and threw it up.”

Other artists didn’t have such a game plan.

“I was trying to use some vibrant, poppy colors,” Robby, an artist from Higher Level Art, said. “Just to kind of show springtime since it’s starting to get warmer, something visually exciting.”

With graffiti often having a negative connotation, events like this give graffiti the potential to break free from that title.

“I think events like this do change people’s perspective,” Robby said. “It is legal. It is an art form, but people don’t realize that when it has the context of being illegal or on someone’s property. It’s not so much graffiti when it’s legal, but it’s art.”

Another independent artist, Kyle Marksberry, said events like Graffiti Fest show that it isn’t a bunch of people drawing on walls, that it is art, and they are artists.

All of the artwork also drew positive responses from the crowd.

“I like anything that has really good compliments of color,” said Jori Calland, freshman journalism major. “I really like the different designs.”

Calland also liked the controlled environment for the not-so-controlled art.

“It is a different take than seeing it on buildings or trains,” Calland said. “It’s still got the wild look but it’s legal.”

At the end of the day, all of the final pieces were sold in a silent auction.

With graffiti being a negative thing more often than not, CEO wanted to put a positive spin on it, according to Hulett.

In order to do this, they decided that with their theme of relief, they would provide relief in anyway they could.

“The two main ones are the American Red Cross and their disaster relief efforts, and then Visionaries and Voices, a local non-profit that helps mentally and physically disabled people create artwork,” Hulett said. “And then also helping a student on campus, Katelyn Dehoff, to start a non-profit called Revive the Heart, to raise awareness for human trafficking.”

According to Hulett, whatever is leftover after that will go to the Visual Arts Department to aid students with printing costs.

The total raised from Graffiti Fest was $1,500. Half of the proceeds for each piece went to the artists and the other half was to be distributed among the charities, according to Hulett.