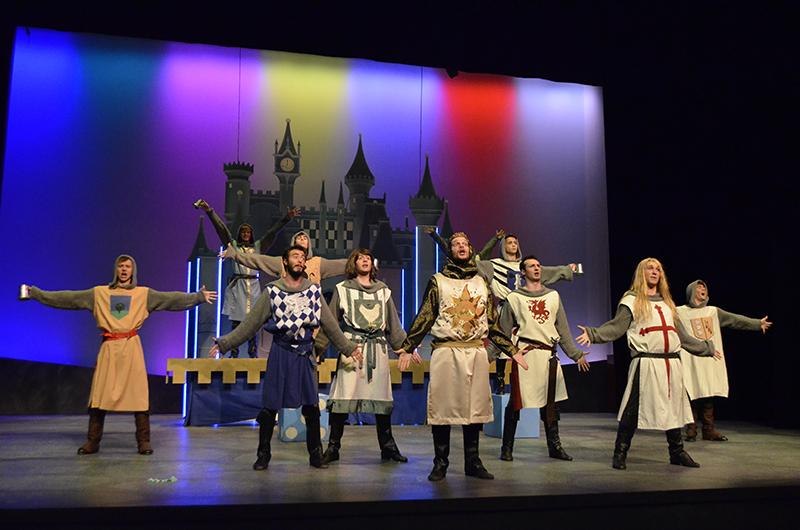 The cast of NKU's production of Spamalot takes the stage.

After finding a seat, you will probably notice a few things while you wait for the show to start and other audience members file in. Perhaps you’ll hear the orchestra warming up their various instruments. You might notice the castle walls built into the side of the theatre. You will definitely notice the art on the main stage curtain.

Then, the house lights dim and you know the show is about to start. A British voice comes over the crowd to give the anything-but-standard pre-show announcement.

The NKU theatre department has been preparing for opening night for months and all the hard work will culminate in the curtain going up at the Colbert Theatre on April 17 as the magic of Monty Python hits the stage.

The classic film, Monty Python and the Holy Grail comes to life in the hilarious musical, Spamalot, which tells the story of King Arthur and his knights of the round table; with showgirls, killer rabbits and the knights who say Ni!

“It’s a crazy ride, it’s basically a roller coaster ride,” said Ken Jones, chair of the department of theatre and dance and director of Spamalot.

Jones compares his NKU roller coaster riding cast to that of the national broadway cast, filled with talent.

“It’s pretty unbelievable, the amount of talent that’s there,” Jones said. “They really rival the national broadway tour that came through Cincinnati.”

Nate Netzley, senior BFA acting major and assistant director, said he hopes the fans will believe they did the movie justice and that people who have never seen it before will want to see more.

“That’s what we’re hoping for.” Netzley said, “That we will entertain old Monty Python fans and we’ll make some new ones.”

Noah Berry, junior musical theatre major, plays Sir Galahad in the musical and said he really couldn’t pick a favorite part of the show because, “each scene is so hilarious in it’s own right.”

“The entire show is my favorite part,” Berry said. “It’s just a hilarious show that’s too funny to pick a favorite scene.”

Jones agreed, saying that the show is funny from the pre-show announcement to the end.

Brad Goren, senior BA theatre major who plays King Arthur’s loyal sidekick, Patsy, said he would have to choose between the French taunting scene and the Prince Herbert scene.

“Those two are just hilarious,” Goren said. “I get to stand in the wing and just watch it every night.”

Goren said his part is mainly a physical acting role and that while he doesn’t have a lot of speaking lines, his “persona on stage makes the character who he is and he’s a lot of fun.”

“I would say he’s like the Shakespearean fool because he’s actually the smarter of everybody, like all the knights, but because he’s lower class, they don’t pay attention to him,” Goren said.

Though the show is all about the fun, Jones acknowledges that there were some challenges along the way. The theatre department has wanted to do Spamalot for years, but had waited until the right time when they’d have the team to pull together the massive show.

“It’s a giant musical,” Jones said. “It has everything that you could possibly cram into a musical.”

Jones said the size of the show makes it a wild ride. Throughout the course of the show, there are over 180 costume changes; including what Jones calls ‘magic tricks’ of actual onstage costume changes. Even at one point, the character of the Black Knight engages in a sword fight and has his legs and arms chopped off.

The scenery is at a constant change as well, switching from massive castles to small mud huts. With all the hustle and bustle on stage the biggest challenge has been keeping everything in focus.

“We have to keep the actors focused on the play and not the stuff that’s flying around them,” Jones said. “It’s about keeping their comedic timing on the money.”

All those constant changes showcase the endless efforts of the students. Jones said that even though each aspect of the show had a faculty advisor, the students had put their own hard work into every section.

“They’re very much invested in this show top to bottom,” Jones said.

All in all, Jones is ready for the show.

“I hope the audience just laughs,” Jones said. “I hope they laugh from beginning to end.”