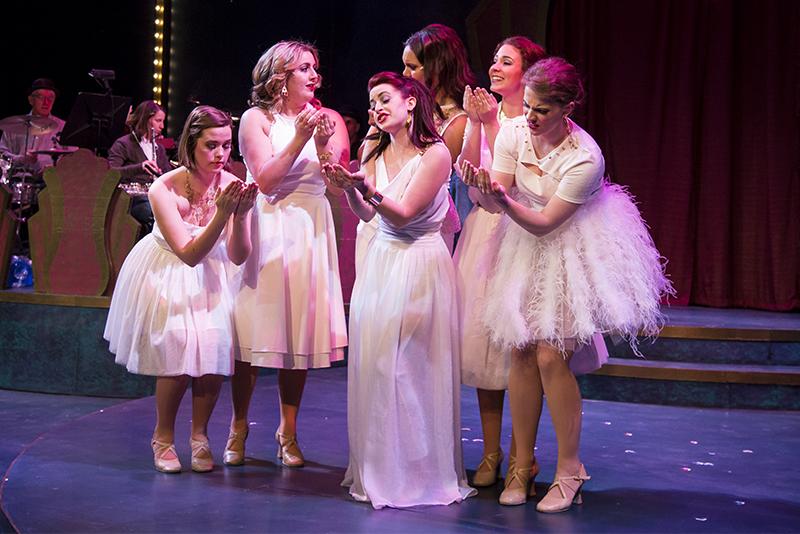 The actresses of "A...My Names is Alice" rehearse on stage. "A..My Name is Alice" will begin it's run on March 20.

As the lights go up on stage and the first few notes start to play, we see a variety of women all wearing white dresses. Soon, one woman sings about being “trapped in the doubt of [her] life.” Other women sing about being “fed up with rules,” or “needing some peace,” and even drowning in the “carpool of life.”  What’s the solution to these struggles of womanhood? Knowing that we don’t have to face these trials alone and can all join an “All Girl Band.”

Written in the 80’s, “A…My Name is Alice” is a compilation review filled with scenes and songs like “All Girl Band” that will have you tapping your feet and wanting to sing along and dance numbers all done by multiple writers celebrating women of all walks of life.

“It’s not one large plot,” said Corrie Danieley, director of the show. “Each piece has its own flavor.”

The show features seven actors, all female, playing multiple roles. For Danieley, watching the actors step up to the challenge of playing so many roles has been her favorite part.

“It’s incredible to watch them bring these different personalities, physicality and voices to each character,” Danieley said. “It’s a huge character range, from little girls to 80 year olds, and everything in between.”

Danieley believes the show will appeal to everyone, not just women.

“It’s not men bashing,” Danieley said. “It’s just saying we’re women and we have strength, and it’s okay that we’re not men.”

Danieley believes that no matter who is watching, man or woman, the audience will find the heart and humor in the show.

Erin Ward, senior BFA acting major, said the show gives the women a chance to show the audience, “who women are, who the world thinks we are and who we think we are.”

“It’s different portrayals of women and what we’ve been through and our triumphs and our journeys and really showing the…different sides of ourselves,” Ward said. “We’re lovers, we’re mothers, we’re daughters. We’re just strong powerful women and so by us all being named Alice, it kind of gives us unity.”

Miki Abraham, junior BFA acting major, echoed those same thoughts and said, “No matter what stage we’re in in our lives, we all understand each other because we’ve all been there.”

Danieley realizes that stories written in the 80’s might seem a little dated, but they still apply wholeheartedly to women in 2014. She stresses that it’s about “strength meeting femininity.”

“It’s about embracing our curves and what it means to be a woman,” Danieley said. “That it’s absolutely fine that we’re not men, but we still have a very valid place in a man’s world.”

Ward said that while the actresses play different women in different points in their lives, they are “trying to create something beautiful and trying to make this world what it is for [women].”

“We just really want to show the audience how versatile women are and how different we all can be, while at the same time, signifying that we are all still women,” Ward said.

Danieley herself saw a changed look at the women in her life.

“It surprised me how much it’s changed my whole outlook on what femininity is and accepting the struggles of the women around me,” Danieley said.

Abraham said her favorite part of the show is at the end when the actresses come out on stage and all say, “A…my name is Alice and I’m doing alright,” because it’s like saying, “look what we just did.”

“Anytime I direct a show, I try to find a connection to the community,” Danieley said.

She said from the first reading, she knew it was a lighthearted show and she wanted to add some depth to it. So on Saturday, March 22, “A…My Name is Alice” will hold a benefit performance with proceeds going towards the Northern Kentucky Women’s Crisis Center.

Danieley thinks their mission and values are “fantastic” and that the added fact of the benefit has inspired the women in the show.

“I think it has [added to their performances]. When I first announced it, I think they felt it added some meat to it,” Danieley said. “It’s also started a conversation. We talk a lot about women who’ve inspired us; not just in history, but in our lives as well.”

After the benefit show, they will host a talk back with women who work for the Crisis Center.

Make it or Break it

Danieley has high hopes for the show and makes it her number one priority for people to have a good time and wants the audience, her cast and crew to all just have fun. For Danieley, there are some nerves going into the show since it’s her first directing job here at NKU.

“I’ve directed shows before and I was trained as an actor, but I do want to make a good first impression here. And, I think with this amazing cast and crew, that will happen,” Danieley said.

She’s confident though and hopes everyone leaves the show uplifted and even inspired.

“I hope people watch the show and have a moment to think about the women in their life, or if they are a woman what that means to them,” Danieley said. “And, what kind of women they want to be in the future.”

Hallie Hargus, sophomore BFA musical theatre major, said she hopes the audience will have fun because the show is a lot of fun. Her favorite part is the opening number of the second act when they play a group of ladies from the 80s.

“We get to dress fabulously 80s and we all say we look like our mothers,” Hargus said.

The ladies are going to a strip club for the first time and Hargus said it’s fun because the song goes between a very classical song to one that’s, “fun and kind of down and dirty.”

Still between the laughter, the show also has some touching moments too.

“I hope they leave with a positive attitude and have a positive outlook on themselves, especially the women in the audience and just enjoy the celebration of women,” Hargus said.

A…My Name is Alice will run in the Robert and Rosemary Stauss Theatre March 20 – 30.