An expert’s insight on the 2014 Oscar nominees 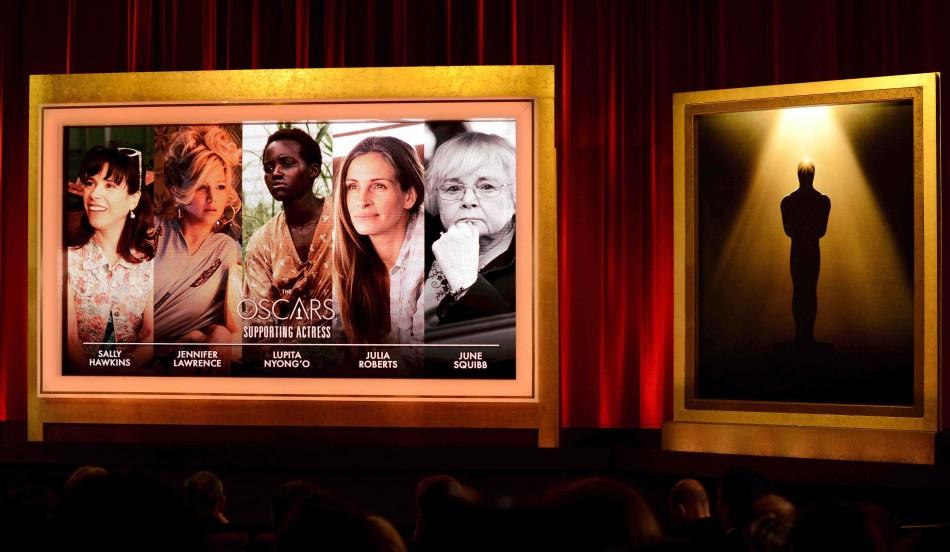 The 86th annual Academy Awards air this Sunday; everyone is making their picks and here at NKU John Alberti, director graduate studies and cinema studies, has made his.

As with many of the categories this year, the talent is heavy. Alberti saw strong performances from each of the actors in the category. Even with all the talent, Alberti thinks that frontrunner Matthew McConaughey will most likely take home the award for his role in “Dallas Buyers Club.”

“Who knew he could act? You got a hint of it in ‘Dazed and Confused’ years ago, but he’s really built himself into a respected actor,” Alberti said. “He’s not just the guy who takes off his shirt anymore.”

However if McConaughey does lose, Alberti sees Chiwetel Ejiofor taking the honor for his role in “12 Years a Slave.” He calls Leonardo Dicaprio “the dark horse” and said that even though his performance was strong, he’s unlikely to win over the academy for his role in “The Wolf of Wall Street.”

Alberti believes that in the past it’s been difficult to find women in leading roles in film and that television has been beating film in terms of portraying strong female characters as the lead role.

He says film at times has struggled with the idea that “the lives of women could be intricate subjects of art”, but this year the strength in female roles was abundant. For Alberti the strongest of the women this year would be Cate Blanchett in “Blue Jasmine.”

“She was absolutely stunning and haunting in that film,” Alberti said.

He did say however that Amy Adams has truly proved herself in the past couple of years as an actress.

“Jared Leto has the hallmark of an Academy role,” Alberti said.

Leto has been the frontrunner, taking home every award he’s been nominated for all awards season, and Alberti believes he’ll continue his winning streak.

Alberti said that his role in “Dallas Buyers Club” as a transvestite shows a total transformation, which is something the Academy loves.

“Leto could be a consistently great actor instead of just a mediocre rock star,” Alberti said. “He’s going to be taken seriously as an actor from now on.”

He said that her performance in “12 Years a Slave” was simply amazing and that it will give them a chance to give an award to someone who’s never won before.

While he believes Nyong’O is a sure thing, Jennifer Lawrence could always come up from behind.

“Lawrence is a phenomenon, she steals every scene in ‘American Hustle,’” Alberti said. “She could win just so we can hear another one of her fun acceptance speeches.”

In both of these categories Alberti believes “Frozen” has it made.

“It wasn’t just a good cartoon, it was a great movie,” he said.

And as for the song “Let it Go” Alberti pointed out that it’s rare that a song nominated for an Oscar becomes so popular and is requested by fans to be performed on the show as well.

He said that “The Moon Song” from “Her” is a really great simple song, but the song following that ‘Frozen’ has earned puts it ahead.

“You aren’t seeing ‘Her’ sing-alongs,” he said.

“What was done visually in ‘Gravity’ made you feel like they actually filmed it in space,” Alberti said.

Alberti believes this race comes down to two films, “12 Years a Slave” and “Gravity.” The two tied for best picture at The Producer’s Guild Awards, which has never happened before.

“’Gravity’ had the box office, but ’12 Years’ is respected,” Alberti said.

Alberti said that ‘Gravity’ had the visual quality that drew you in, visuals that were so good they even overshadowed Sandra Bullock’s performance. ’12 Years a Slave’ however had the performances and the social impact.

“It’s socially important, slavery is often addressed, but never in a critical and real way until recently with ‘Django Unchained’ and now this,” Alberti said. “It can be a hard subject to make a movie about and it was deeply moving.”

We’ll have to wait until Sunday to see how Alberti fairs in his picks for the 2014 Oscars.

“It just really was a great year for movies as a whole,” Alberti said.

Check out a full list of nominees below to make your picks! 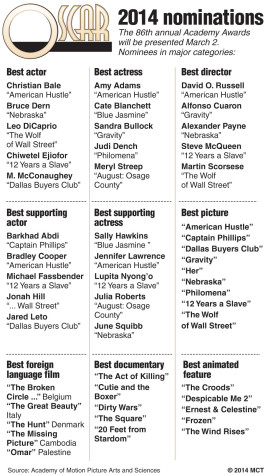